Absolutely no one who writes for newspapers has any idea of why Covid may have almost completely disappeared from Japan since the sudden Delta wave in August.  The trajectory collapsed on August 25th and vaccines don’t explain it.

“While Omicron explodes around the world, COVID cases in Japan plummet and no one knows why”

Call it the hunt for a potential “X factor,” such as genetics, that may explain the trend and inform how Japan could deal with the next wave. While the new highly transmissible Omicron variant has appeared in the country and experts suspect there is already some community spread, the overall transmission rate of the virus and coronavirus-related deaths in Japan have remained low. “

” “Honestly, we do not know the exact reason behind the sudden drop in COVID deaths in Japan,” said Taro Yamamoto, professor of global health at Nagasaki University’s Institute of Tropical Medicine. “

There is no mention of the-drug-that-shall-not-be-named — Voldermectin. But on August 13th as the third major wave was running out of control, a high ranking doctor in Tokyo recommended doctors use ivermectin. Dr. Haruo Ozaki, the Chairman of the Tokyo Medical Association said it was time for doctors to give patients information on ivermectin “and get permission to use it”.  Around the same time, possibly on August 10, another doctor, Dr. Kazuhiro Nagao was seen on a Japanese television show calling ivermectin “a silver bullet” and describing how he’d treated 500 patients with ivermectin and they “all felt better the next day”. (See below). The peak of daily cases in Japan was two weeks later on August 25th, 2021.

In Japan, the third major peak was more than four times larger than previous peaks.

Things were looking pretty bleak in August during the post Olympic spike of cases for a while there were more than 20,000 new cases every day. Then, “a miracle” occurred, and now in a population of 126 million the current daily cases across the whole of Japan amount to a very small, 200 per day. 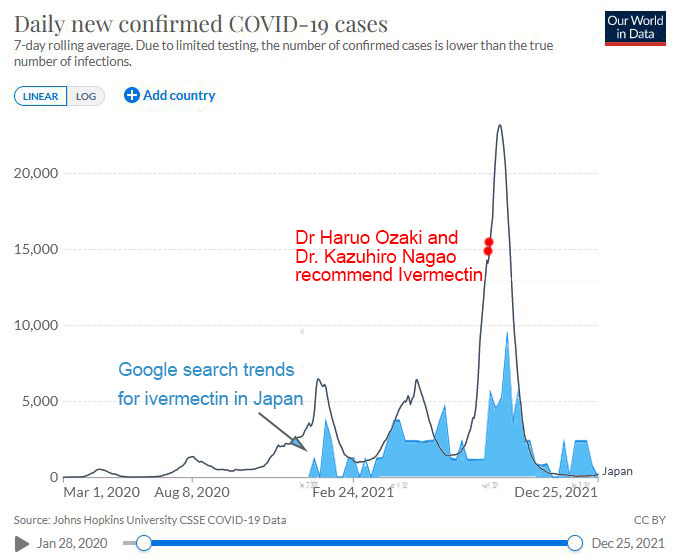 Japanese cases of Covid plummet as people search for ivermectin.

So the extraordinary turning point in cases starts 2 weeks after two Japanese doctors recommended ivermectin and searches for the word “ivermectin” in Japan became more popular than ever.

The peak search week for “ivermectin” in Japan was the following week.

But also watch the Japanese Doctor Kazuhiro Nagao director of the Nagao clinic on TV in August talking about how we “give Ivermectin to everyone who wants it”, on the “same day” they test positive. “They feel better the next day”. Watch the expression on the interviewer in the last second where he asks Dr Nagao how many of his 500 patients got worse afterwards, and Dr Nagao says “None.” (If you can’t see the video below try another browser!)

Dr. Nagao is director of the Nagao Clinic and a university professor.

That interview possibly occurred on August 10th, and was written up here.

Google translate is struggling. But the good doctor said with “the silver bullet” ivermectin Covid should be reclassified to just a seasonal flu.

Dr. Nagao recommends that corona, which is currently classified as Class 2, be treated as Class 5, which is the same as seasonal influenza. By lowering the price, “early diagnosis and immediate treatment by a practitioner is possible = prevention of aggravation” “Practitioners directly request for those who need immediate hospitalization = no time lag” “Health observation of close contacts, no need to allocate hospitalization destinations” “= Eliminate the collapse of the health center” and three merits are mentioned. That’s important. ” He also said, “There is a silver bullet called ivermectin that anyone can use. It is a drug that is usually used for the treatment of scabies. It will be distributed to all people.” He also proposed a “suganomectin” system that is comparable to “abenomask.” On top of that, Dr. Nagao said, “If I make a mistake, I will take responsibility and quit the doctor.” It only looks like it’s waiting for it to change. If you treat it early, it’s over. No one I’m seeing is dead.

All of these quotes are extremely hard to find now, so thanks to readers who sent in these links (see the hat tips at the end). I keep all those emails.

A search for “Ivermectin in Japan” now though will turn up 50 news stories categorically saying that “No, Ivermectin Did Not Help Japan Bring Down Covid-19 Coronavirus Delta Surge”. Apparently the fall is a complete mystery, but was absolutely, definitely not due to ivermectin.

It might be because Japanese people wear masks, though they did that through all the other peaks too and it didn’t stop the rise, nor cause a sharp fall. It might be because Japanese people have a rare gene called APOBEC3A, though they probably had that gene in waves 1 and 2 as well and there were no miracles then. It might be because the Delta virus in Japan mutated itself out of existence. That creative theory centres on the A394V mutation, which occurs on nsp14 – a viral gene that checks for errors. The idea is that if nsp14 is faulty the virus might just make such bad baby viruses that they stop infecting people. It doesn’t really sit well with natural selection. Somehow the virus was incredibly fertile til August 25th, then the superspreading dominant Delta variant was somehow outcompeted by a baby that couldn’t make good copies of itself. Which sort of begs the question of why one of the other offspring-of-delta didn’t just take over and outcompete the dud baby. And as John Campbell points out, that same gene occurred in the virus in 24 other countries. It can be found in strains AY.1 AY.3 AY.4 AY.5 AY.6 AY.7 and AY.12 strains.  No miracles.

At the point when the caseload peaked and suddenly flipped, only 44% of Japanese people were fully vaccinated. It’s hard to believe that reaching the number 45% the next day somehow triggered the miracle.

Not to mention that many other countries vaccinated a similar number of people but they didn’t crush Covid. 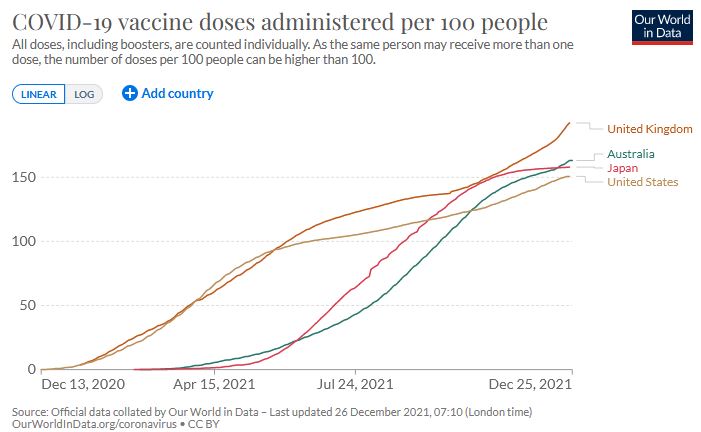 One eighth of the death rate?

The third big peak in Japan was really quite remarkable. Despite having four times the caseload of all previous peaks, the deaths per day were half as high as the first and second peaks, even though the biggest peak was almost solely due to the deadlier Delta variant.  The second peak was 90% Alpha variant (the UK variant). Mortality in the UK, Scotland and Canada was worse for Delta.

So some of the reduction in death rates is due to the vaccination program, but when half the nation wasn’t vaccinated, it doesn’t make sense that the death rates would fall by a factor of eight. 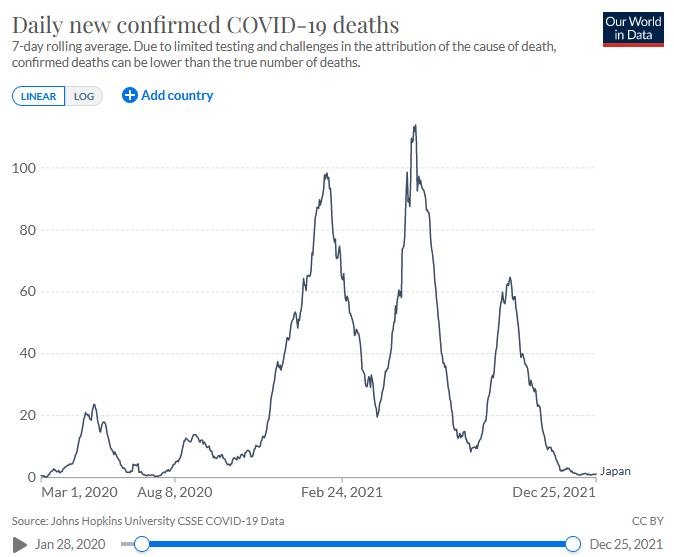 Despite the third major peak being the highest case load in Japan, and due to the Delta variant Covid deaths per day in Japan were half the previous peak.

According to OWID, currently 71% in Australia are fully vaccinated, 69% of the UK, and 78% of Japan.  Clearly the vaccination rate doesn’t explain the massive discrepancies in death rates. 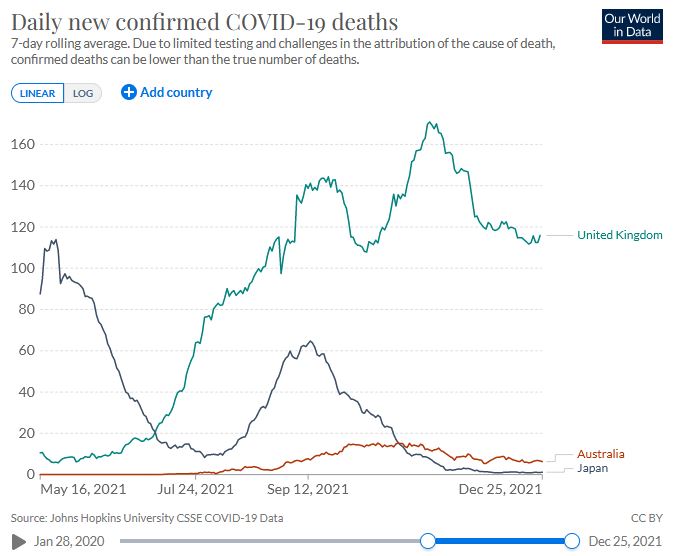 The UK has half the population of Japan but 100 times the deaths. | Source: OWID

Apparently, Ivermectin is still being used in Japan and people are not happy

BY OSAMU TSUKIMORI ,  Dec 21, 2021, Japan Times
Authorities have flagged concerns over scores of messages posted on websites for agents that import drugs into Japan from those who have mail ordered the anti-parasite drug ivermectin.

“I just received the package and, to prevent (coronavirus) infection, I’m going to take it from today,” a 52-year-old man wrote in a message posted in September.

There are agents in Japan that order in ivermectin?

So the bottom line is that officially in Japan, the vaccines are being rolled out and boosted, like everywhere else in the modern world. But unofficially, doctors in Japan are speaking out publicly saying that ivermectin works, and people are ordering it in from India. The government of Japan doesn’t need to mandate or approve ivermectin use. Word of mouth will do it, especially when lives are on the line.