In March 2020 a group of doctors working in nursing homes in Toledo, Spain faced a new pandemic with no effective treatment plan. They figured out their own protocol as best they could with what can only be described as freakish success. In nearby Albacete when Covid struck 1084 nursing home residents, 303 of them died, a 28% fatality rate. But in Toledo, of the 90 patients in nursing homes under Doctor Blanco’s care, only 6 died, and they all died before the team figured out their own new treatment plan. Of the 84 residents who were then treated with antihistamines like Polaramine, all 84 would make it. Every single one, even though their mean age was 85.

It seems too good to be true. Antihistamines are used to calm an overactive immune system (itchy, sneezes and runny noses) but they are not known for their anti-viral activity, though it turns there is some.

And while the antihistamines are possibly very helpful, the whole treatment protocol was so much more, and also included nasal washes, antibiotics, and prednisone, as well as something called “respiratory physiotherapy”. Somehow these doctors, saints or geniuses, had figured out a combination that worked, and there was no obvious reason why it should be treated like a lucky freak and ignored while millions literally died, yet that of course is precisely what happened.

Another research group in Spain studied nearly 80,000 people to see whether there were patterns in who got infected the most often. Only a few things ended up being significant and one of those was histamine use. People using antihistamines were half as likely to catch covid. (Vila-Córcoles).

But make no mistake, their treatment plan was a lot more than just Polaramine, and the antibiotics and nasal washes would all be important too.

For example, azithromycin works against a lot of viruses:

But antihistamines have their own toolkit against viruses and cytokine storms:

Regarding antihistamines, in recent years molecules with antihistamine activity have been identified as having powerful antiviral properties, inhibiting the entry of certain viruses into the target cell, such as the Ebola virus (filovirus) [28], or the hepatitis C virus (flavivirus) [[29], [30], [31]], or by other mechanisms [32]. Several H1 receptor antagonists have demonstrated inhibitory properties on the production and expression of interleukins, chemokines, and other cytokines [33]. Specifically, cetirizine decreases interleukin production [34,35].

There’s a whole lot more in the paper, but right now I’m just thinking of all the times a doctor told me that antibiotics won’t help with a viral infection.

We’ve been living in an age of antivirals for years, but we didn’t know it. That probably wasn’t an accident…

Naturally, instead of waiting for people to get sick, tested, and admitted to hospital Dr Blanco and co started treatment straight away, and even prophylactically — giving caregivers 12 vaccines. (Not!). They gave caregivers and others in the nursing home polaramine or some other equivalent before they even got sick. 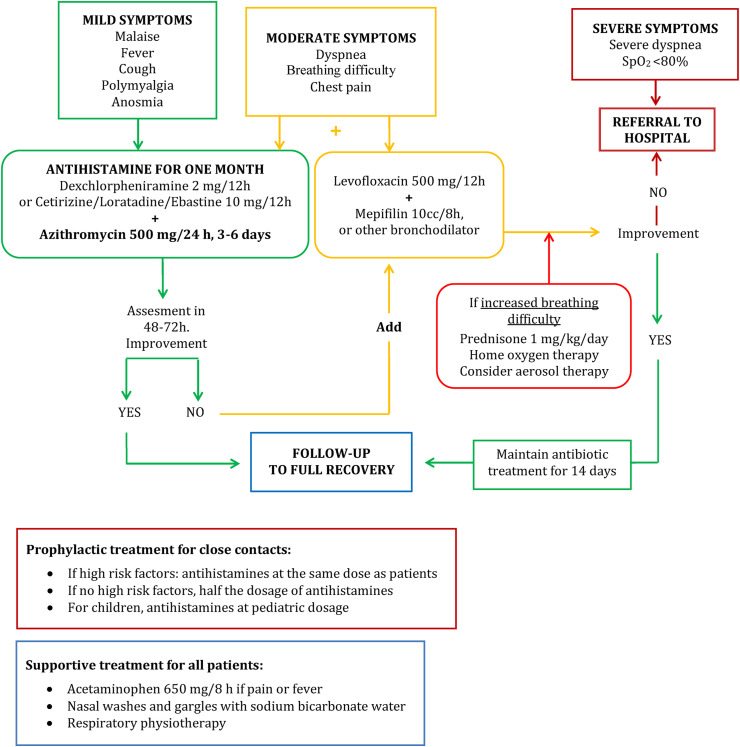 I’ve added the common brand names in brackets below.

1.Early start of treatment, regardless of the severity of patient symptoms.
2.Patients with mild or recent-onset symptoms (cough, fever, general malaise, anosmia, polymyalgia):
3.If symptoms of severity (dyspnea, breathing difficulty, mild or moderate chest pain, with SpO2 >80%, heart rate <100 beats per minute at any time of the process):
4.Prophylactic treatment for close contacts, including all asymptomatic residents:
-Antihistamines at the same dose as symptomatic patients.
ARS-2 infects the ACE-2 receptor, which is expressed on MAST cells, which are an immune cell loaded with histamine, notorious for their role in allergic reactions.

Take this paper to your doctor?

It is only an observational study, not a randomized, blinded one, but the results are remarkable.

As always , you must check out the side effects and cross reactions with medications yourself. Polaramine is well known for making people drowsy, so don’t drive or pilot a passenger aircraft. The antibiotics need a prescription.  But you may want to have some antihistamines on hand, so consider them now, before the FDA or TGA bans them.  I’ll say more sometime about other antihistamines. This study was based on 90% polaramine, though other studies use the other varieties.

It was obvious this treatment plan was doomed

Listen to Dr Blanco and co:

This safe and inexpensive treatment protocol could have a crucial impact …

Antihistamines and azithromycin are drugs with extensive experience of use, good safety profile, good tolerance, low cost and wide availability, so this combined treatment regimen may respond to the global therapeutic needs for COVID-19 for all age groups. Clinical trials are necessary to determine its efficacy. As there are no commercial interests, they should be promoted by national health systems as a social responsibility.

If only. How many people might have been saved?

Image of Polaramine by Ver no navegador