The most surprising thing about the Brandon government is that it hasn’t done this before the Babylon Bee. 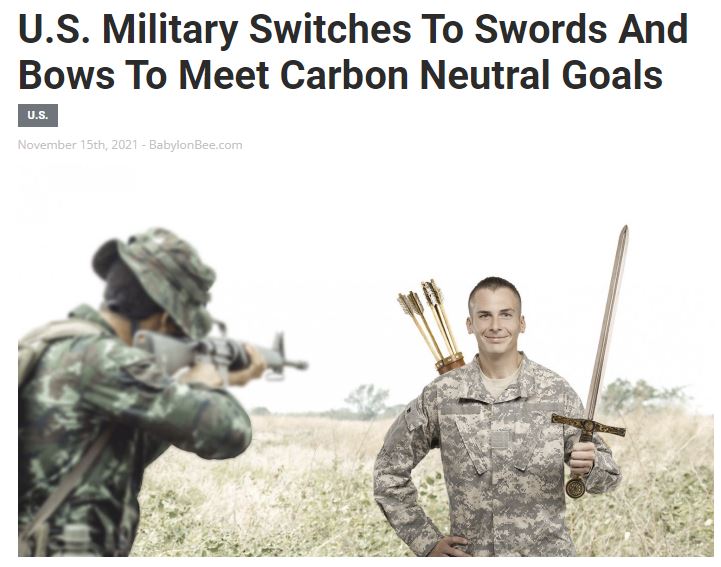 “We have a deadly enemy out there,” announced General “Sparkles” McKenzie, “and it’s called carbon. The problem with modern-day weapons is that they take a lot of carbon to make. But if we get some nice bespoke swords or bows and arrows, that will help us stay carbon neutral, and you can all sleep safe at night.”

There are some problems with the new policy, though. Some military simulations have shown that swords and bows do put the military at a disadvantage against armies that still use irresponsible gunpowder and explosive weapons. “We have a modern weapon for that,” explained McKenzie. “It’s called the hashtag #StopTheBang.

Looks like the US Army will skip the Solar Powered Tank transition proposed by NATO. But swords, bows and arrows are easier to carry on carbon neutral sailing ships. And better for marines using attack-bicycles.

In other news (which is not parody):

In response to a question of “which is a bigger threat, the climate or China?” [Pentagon spokesman retired Adm. John Kirby] said, “You’ve heard the secretary talk about the climate as a — a real and existential national security threat . . .  And we considered China as the number one pacing challenge for the department. Both are equally important. Both are — are challenges that the secretary wants the senior leadership at the Pentagon to be focused on, as well as many others, too.”

After questioning Kirby was unable to state whether Climate Change or China posed the greater threat.

He appears to be 200 years behind the times. After a hundred thousand years of losing to climate change, living in caves and dying in blizzards, humans defeated climate change with fossil fuels.