This will make some public health officers sweat

In Sweden, a new study followed 840,000 people who were double vaccinated for nine months which is longer than any previous study. The researchers matched them or “paired them” with another 840,000 people who were the same, age, sex and from the same area. Out of this 1.6 million pooled sample, 27,000 people went on to get infected, and most of them were unvaccinated (21,000). So that’s not surprising, but underlying this data was an extraordinary trend showing efficacy falling month after month. In the first two to four weeks, the double vaccinated were very well protected. But by nine months later, the efficacy was not just zero, but negative.

The study considered protection against severe disease too, which lasts for longer, but after 6 months, the older men and people most at risk of Covid (sadly) were more likely to catch Covid that the matched same-age unvaccinated controls they were paired with. Nine months after vaccination, the average person is still less likely to end up in hospital, but protection is trending downwards for everyone.

If only they had something better to offer than just another dose of the same thing?

Not surprisingly, this means that for high risk people in states where all good alternative treatments are banned, booster doses are the *only* option.

The  effectiveness against severe illness seems to remain high through 9 months, although not for men, older frail individuals, and individuals with comorbidities. This strengthens the evidence-based rationale for administration of a third booster dose.

The study, of course, tells us nothing about how well Booster doses work.  But it does suggest that “Evidence based” is the most abused and misused phrase on Planet Earth.

The graphs (golly) suggest some trouble ahead:

The vaccines start off with impressive protection against symptomatic disease. However it falls quickly. By the eighth and ninth month the average vaccinated person appears to be more likely to catch Covid than someone who wasn’t vaccinated. 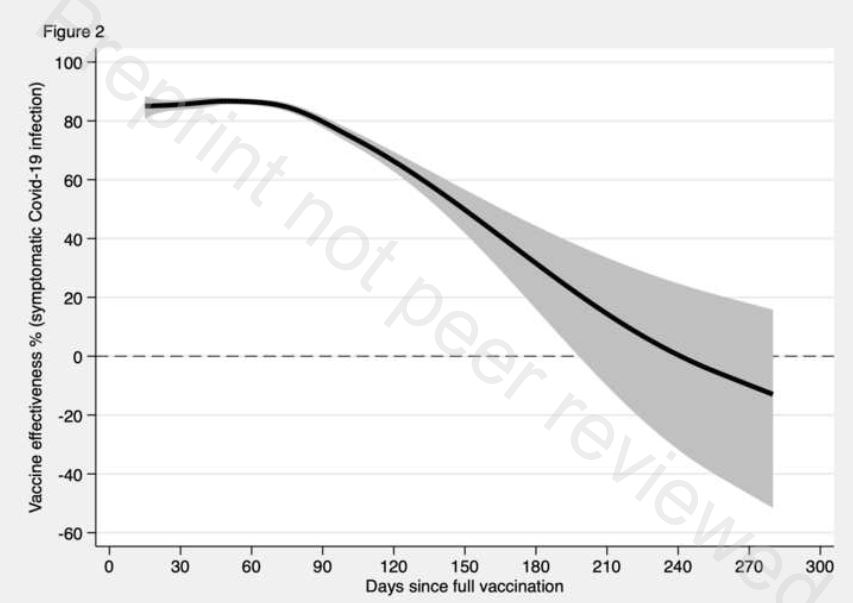 In the graph below, protection holds up well against severe disease for four months. But by nine months the average person is only 20% protected. That can’t be good.

Cities which rely solely and completely on vaccination to protect them may appear to cruise for a while, but by five or six months post vaccination, things may unravel unless the population has managed to catch the disease, recover and gain natural protection, or sweep through the Deep State and stop bureaucrats telling doctors what they can and can’t prescribe.

Unfortunately the window to gain natural protection while being protected by the vaccine is just not long enough to avoid overwhelming the hospitals. 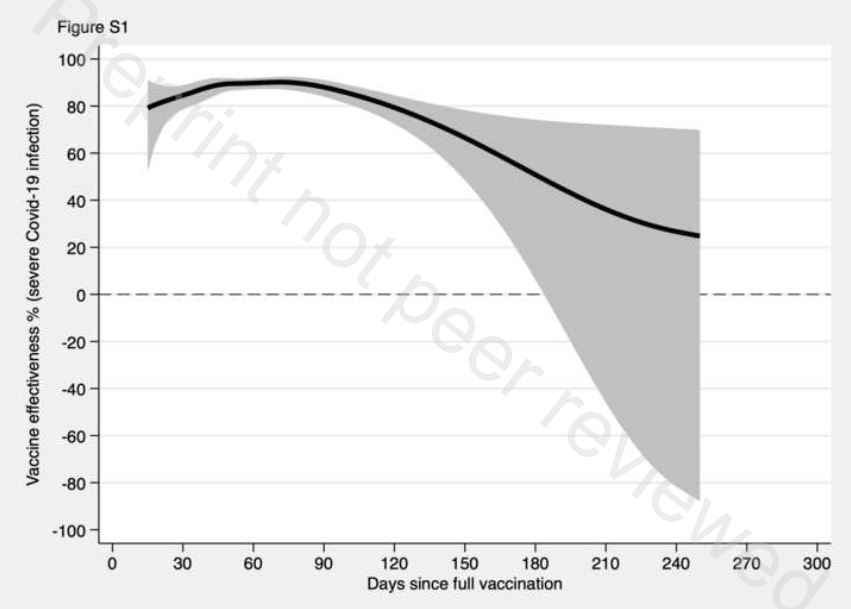 Swedish Vaccine, protection against severity after 6 to 9 months. Graph.

If only there was some other drug we could use, one that was cheap, safe, in large supply and  also worked against Covid in many stages? Imagine how many lives that could save…

In our wildest dreams this hypothetical cheap out-of-patent drug might even have been tested for us on states with two hundred million people to show how well it worked. If only…

Notice in this graph above, protection keeps improving for six weeks after the second dose? Our immune system spends weeks tweaking the antibody profile — and selecting slightly better antibodies. A fully mature immune response is slow,  another reason that testing vaccines is not a fast process. And perhaps giving a second dose while the first dose response is not even finished is not the best plan?

On the plus side, researchers tossed out anyone known to have caught Covid, so the study-groups didn’t have a large confounding slab of people with strong natural protection skewing the results — though a few people would have inadvertently or asymptomatically done that anyhow. (Swedish testing rates weren’t that great).

Maybe things are not as bad as these graphs look? (Boy do they look bad).

The problem with matched or paired studies is that whatever factors drive people to get vaccinated in the first place are the same ones putting them at risk of a poorer immune response. Obviously, people at higher risk of dying of Covid will be more likely to get vaccinated. The two groups don’t start out with the same risk. The negative “ratio” at the end may be exaggerated.

And the group who got vaccinated nine months ago, are obviously not the same sort of people as put it off til September. High risk people were vaccinated earliest and they are the first to reach the “nine months” mark.

The Swedish study is large (to put it mildly) and they even tested a bigger cohort too. By relaxing the matching process they managed to put together a second sort-of-matched cohort of nearly 4 million people. That’s pretty much the whole population of Sweden and it largely confirmed the trends.

In other news, they found that mixing and matching vaccines appear to give a bit better protection than sticking with the same brand.

The real message though, that the authors didn’t say, was that we need to use the damn antiviral treatments we already have — and it’s a crime that we aren’t.

Unconnected with the study, someone somewhere put together a video that fits this occasion.