Bad news for athletes born as baby girls – unless they start testosterone therapy straight away,  it’s hard to see how they can win against babies with 18 years of DIY hormone “treatments” that help them grow six inches taller, with lower body fat, and larger hearts and lungs.

The old rules were silly, but the new ones are worse:

by Libby Emmons, The Federalist

Overturning the entirety of human history and understanding about biology, the IOC states that “No athlete should be precluded from competing or excluded from competition on the exclusive ground of an unverified, alleged, or perceived unfair competitive advantage due to their sex variations, physical appearance and/or transgender status.”

At this point, it makes more sense to just drop women’s events entirely and make each race open. May the best human win.

Or were we hoping to inspire little girls to excel in sport, and perhaps stop women from being injured on the Rugby field… 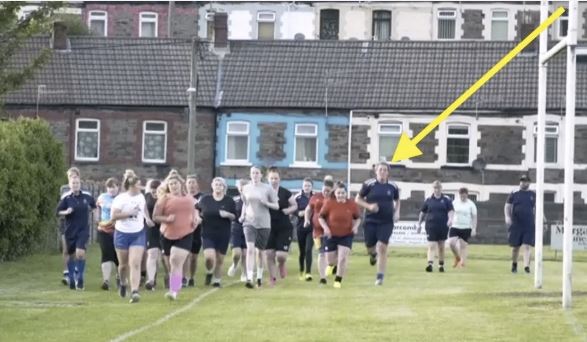 One transgender rugby player who is six feet tall has been nicknamed “Beast” by teammates on the Porth Harlequins Ladies squad in Wales, BBC Sport reported.

We don’t want to offend anyone, but crushing dreams of girls is fine:

The IOC said testing athletes’ testosterone levels to verify that they are able to compete against women, who have far less testosterone than any male person, is “invasive” and “disrespectful.” They did not issue a statement on how invasive or disrespectful it is to force women to compete against bigger, stronger, men, or to allow men to take women’s places in athletic competition.

It’s not binding, so only countries that want to win medals will make the most of the opportunity.

These rules are not binding, but they do mean that every country can essentially decide whether they will send women to women’s Olympic sports events. “What we are offering to all the international federations is our expertise and a dialogue, rather than jumping to a conclusion,” said Keveh Mehrabi, IOC director of the athletes’ department.

In an open human competition which events will baby girls hope to grow up and win medals in? On a page called Great examples of women competing against men. There are examples from Horse racing, sailing, equestrian events, motorbike racing, and darts. But in sports outside those, there’s …

How great a moment is it when a 29 year old woman beats a 55 year old man in three sets of tennis? Even the “great moments” list includes the story of Venus and Serena in 1998. The Williams sisters, at the peak of their game, thought they could beat any man outside the top 200. But Karsten Braasch, ranked 203 beat them both separately by 6-1 and then 6-2.  Good on the Williams sisters for giving it a go.

One sport that the average woman can do better than the average man is ultra long distance swimming.

by Melissa Dahl, The Cut

There’s something special about ultra-swimming, it seems. In 2014, for example, Knechtle published a paper looking at 30 years of finishing times for the Manhattan Island Marathon Swim, a 28.5-mile loop around the perimeter of Manhattan. On average, the best women were 12 to 14 percent faster than the best men. Another study, published in 2015, looked at 87 years of finishing times for the 20.1-mile Catalina Channel Swim, and found that when “the swimming times of the annual fastest women and the annual fastest men competing between 1927 and 2014 were compared, women were 52.9 minutes faster than men,” Knechtle and his colleagues write.

Steven Munatones [is] considered one of the foremost experts on open-water swimming. A few years ago — purely to satisfy his own curiosity — Munatones analyzed the finishing times of men and women who participated in the biggest ultra-distance swims around the world. He did this for three years, keeping track of “12 or 13” races — he can’t remember exactly. He never intended to publish these results anywhere; again, this was for his own curiosity, as a coach and as an open-water swimming fan. Here’s what he found. “If you’re looking at the average times — the average woman is faster than the average man,” said Munatones, who is the founder of the World Open Water Swimming Association. “Which, frankly, I was surprised to see.”

The reason women have an advantage in the water is because body fat floats better than bone and muscle. It’s easier for women to stay horizontal and reduce drag. It’s hydrodynamic.

But don’t get your hopes up. The fastest longest swims are still won by men. Munatones points out that at the most elite levels of ultra long distance swimming, like, in English Channel Swims, the fastest men still usually beat the fastest women. The events Knechtle studied, he claims, don’t attract the Olympian types. It’s interesting that at the highest level, in the English Channel Swims, the average women were 33 minutes faster than the average men. But males have wider distributions on most bell curves. At the thin tail, there may still be more men.

All this effort to find sports that women might, maybe, possibly could outdo men in — really brings us back to the point of the post. Ultra-long events are the only events without machines, tools or horses that people-born-as-women might have an advantage in.

Women will win Gold Medals for the ultimate in long distance events, longevity.  Otherwise, biology is what it is:

It’s not likely that women, at either the amateur or elite level, will be sprinting faster than men any time soon, whether that’s on land or in the water. “Women have lower hemoglobin levels, lower oxygen supply to their limbs, a smaller stroke volume in their hearts, and generally less power in their muscles,” Eveleth explained.“But even if it’s unlikely that a woman will break into the mens’ world record circle for the 100-meter-dash, at mile 100, they are catching up.”

We’re following the science all the way to oblivion.  Genes don’t matter. Hormones don’t count, and science is just a PR tool for tribal politics.