From Ian Plimer: My latest book, Green Murder, will be released on 22nd November 2021. All pre-publication orders I will sign and inscribe. (Put it on your Christmas wishlist, or give it to a friend!) 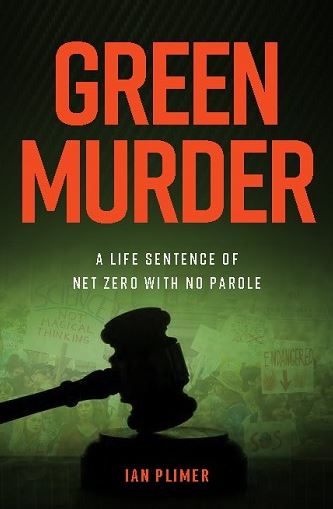 They murder free speech and freedoms and their takeover of the education system has ended up in the murdering of the intellectual and economic future of young people. They terrify children into mental illness with their apocalyptic death cult lies and exaggerations. They try to divide a nation. They are hypocrites and such angry ignorant people should never touch other people’s money.

The greens are guilty of murder. The sentence is life with no parole in a cave in the bush enjoying the benefits of Net Zero.

During the time I was writing this book, the coal price rose 100% and LNG price 500%. Don’t tell me that fossil fuels are on the path to extinction. They are needed for survival.

Civilisation advances one coal-fired power station at a time.

If this book has offended you, so be it. Take a daily teaspoon of cement to harden up, broaden your knowledge, reduce your biases and challenge your thinking.

No matter how offended you might be, feelings are not evidence. Green activists are able to get away with murder because they are unchallenged. Certa Bonum Certamen. Don’t let them get away with it.

The manufacture and charging of electric vehicles (EVs) produces 11-28% more carbon dioxide emissions than for an equivalent diesel vehicle. EVs use far more metal than conventional cars. EVs are a toy for rich virtue-signalling city residents who occasionally drive short urban trips. EVs survive on subsidies and subsidised infrastructure; overload the grid during charging; can’t be used in grid-locked traffic or for long distances and regularly catch alight. If countries change to 100% EVs, then grids are unable to cope because 70% of all electricity will be used for charging cars. The metals for 100% EVs have yet to be found. EVs owners knowingly support child slave labour in the Congo to produce cobalt, devastation of tropical rainforests to produce nickel and totalitarianism for lithium battery production in China.

Reefs have been on Earth 3,500 million years, coral reefs have been around for 650 million years and past reefs have died due to sea level fall and sediment and volcanic ash inundation. The 2,000-km long Great Barrier Reef comprises 3,000 reefs built on dead coral 50-100 metres thick. It is dynamic, has migrated, has died and recovered five times in the last 30,000 years and is not threatened by a higher carbon dioxide content in the atmosphere, by sea level rise or ocean temperature rise.

For hundreds of thousands of years, humans and other organisms have adapted and flourished to great and rapid natural climate changes. Surely adaptation by an advanced technological society would be easier.

What exactly is Net Zero? If it means no fossil fuel use then we go back 200 hundred years. We’ve been there. Endless mud, dung, shortened lives, disease, no heating, no cooling, nothing of the modern world and no hope. Some EU leaders are telling us that under Net Zero we will own nothing and be happy. I call this communist slavery.