Some poor sods will be paying extra to help Griffith Wind Farms cover the cost of shutting down for part of the COP26 Superhero Costume Party.  If only that secret charge was listed on their electricity bill. Where is the transparency? 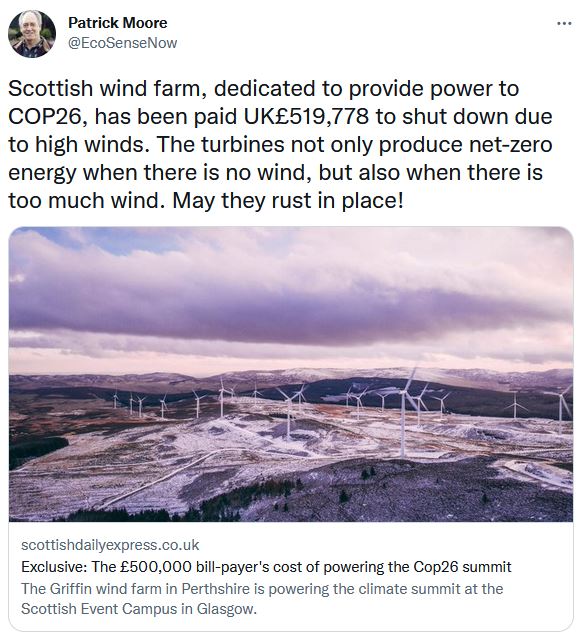 Big Lie Number 1: that the Glasgow COP26 event is powered by 100% renewables.

It’s hard to believe, but some people think the wind powered electrons can be tracked and relied upon.

There will be some accounting shell game where “100% of the annual supply” means they supply the whole years electricity in lumpy packets at times that no conference centre could run on. We know it’s wrong because lies don’t scale up. If the whole nation can’t be 100% renewable at the same time and in the same way, then the Conference centre isn’t 100% renewable either. It’s relying on coal and gas just like everyone else is.

The 100% renewable fakers are show-pony parasites on the system. They need the transmission lines, the back up, the inertia and the stable frequency but they Lord their 100% Renewable Badge knowing full well, that if everyone was “100% renewable” the system would collapse in a day.

… Dr Constable [of NetZeroWatch] claims that this is all “smoke and mirrors.”

He said: “Don’t be deceived by the smoke and mirrors, the reality is that like everyone else COP26 is running on grid electricity, where the bulk is conventional energy and security of supply is still guaranteed by nuclear, gas and even coal.

Meanwhile, now that the celebrities have gone home the punters who flew from all over the world are locked out of rooms that are too small, and told to stay in their hotels and watch online.

“Other UN participants fumed: “Wait wait. The biggest negotiating room at #COP26 has space for 144 people. There are 197 Parties to the UNFCCC. Who thought that was going to work?” “

These people just cannot do maths.