And they wonder why people don’t believe them?

The Daily Mail in the UK put in FOI’s and got back virtually nothing but blackness:

This newspaper used Freedom of Information rules to obtain a cache of 32 emails about a secretive teleconference between British and American health officials held early in the pandemic.

But officials blacked out almost every word before releasing the crucial documents.

Before this discussion, several of the world’s most influential experts believed the new virus most likely came from a laboratory – but days later, the scientists began dismissing such scenarios as ‘implausible’ and branding them conspiracy theories.

At this point our rulers are mocking us. The people have no Freedom of Information, we only have “whatever the bureaucrats want to show us”. 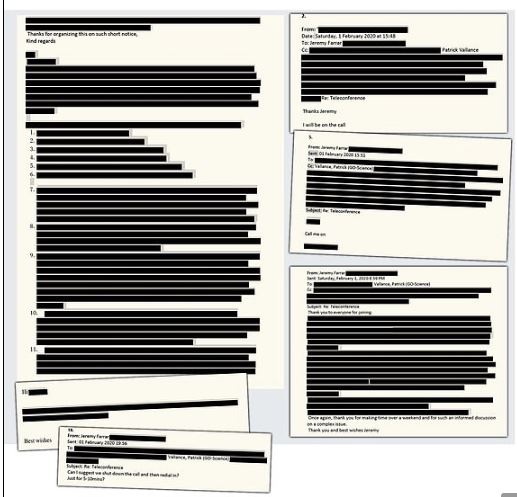 The same people who tell us the vaccines are completely safe are hiding everything they said.

There should be immediate calls for dismissal until these emails are received. Presumably, the contents are so damning these people would be sacked, if not charged, so dismissal is the barest minimum:

The critical call is at the centre of concerns that the scientific establishment tried to stifle debate on the pandemic’s origins, as damning new evidence emerges of US ties to high-risk research on bat viruses in Wuhan, where the first cases emerged in late 2019.

The Mail on Sunday requested emails, minutes and notes on the call between Sir Patrick Vallance – Britain’s chief scientific adviser – and its organisers Sir Jeremy Farrar, director of the Wellcome Trust medical charity, and Anthony Fauci, the US infectious diseases expert and presidential adviser.

Sir Patrick Vallance was Mr Herd Immunity, the man who stopped the UK from closing borders when Chinese Bioweapons could have been kept out, and 133,000 deaths, long-Covid, and debilitating long lockdowns could have been easily avoided.

Fauci, of course, was the man who sent millions of dollars to the Wuhan lab where the virus came from, then allowed the virus to enter the US.

Apparently many experts thought it was a bioweapon until this call:

These emails must be so radioactive that the tiny few sentences they reveal still don’t look good. There are “natural” inserts in viruses, but if that was what they were discussing, why the “blackout” of all that context?

The lines left intact include a demand for the discussions, involving 13 participants around the world, to be conducted in ‘total confidence’, and an intriguing email line suggesting ‘we need to talk about the backbone too, not just the insert’.

The Daily Mail describes how many experts were talking about how it looked like an engineered virus until something changed in this conference call.

The teleconference was led by Farrar, an expert on infectious diseases, who admits that he saw the ‘huge coincidence’ of a novel coronavirus erupting in ‘a city with a superlab’ that was ‘home to an almost unrivalled collection of bat viruses’.

Many prominent scientists, including several participants on the call, feared the new virus looked engineered – among them California-based immunologist Kristian Andersen, who told Farrar beforehand he was alarmed by Covid’s unusual properties.

He said the binding mechanism ‘looked too good to be true, like a perfect key for entering human cells’ while its furin cleavage site – a feature not found on similar types of coronavirus that allows it to enter efficiently into human cells – might be expected ‘if someone had set out to adapt an animal coronavirus to humans by taking a specific suit of genetic material from elsewhere and inserting it.’

After the call suddenly everyone was dismissing the idea of a lab leak as a “conspiracy theory.”

When billions of dollars and so many lives were affected, how can “the cost” of providing these documents be “too high”?

A request for emails, notes or transcripts of Vallance’s conversations with Farrar on origins of Sars-CoV-2 (the strain of coronavirus that causes Covid-19), Wuhan Institute of Virology or Shi Zhengli, its infamous ‘Batwoman’ expert, was rejected on cost grounds.