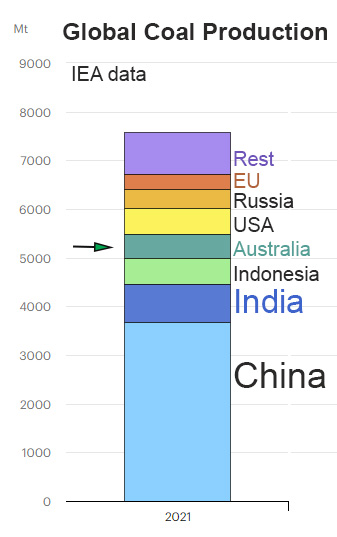 What will it solve if Australian coal stays underground?    | Graph IEA

If Australia stops digging up clean high energy coal, hands up who thinks Indonesia, Russia, India or China will cut back too? Anyone?

Australia is stopping the world from digging up more dirty coal.

But it’s never been about carbon dioxide…

Australia is typically the second biggest exporter of coal. But we are not the dominant producer of coal. Australia produces only about 6 per cent of the world’s coal. China produces about 50 per cent of coal globally.

Most nations that use coal have some coal of their own. Australia, with such a small population of 26 million, exports most of its coal. Our biggest coal export competitors are Indonesia, Russia, Colombia and South Africa.

In the event that we were self-destructive enough to abolish our coal industry, global coal use would not decline. Our export markets would be taken by Indonesia, Russia and so on. Countries such as China and India would be forced to use more of their own coal. 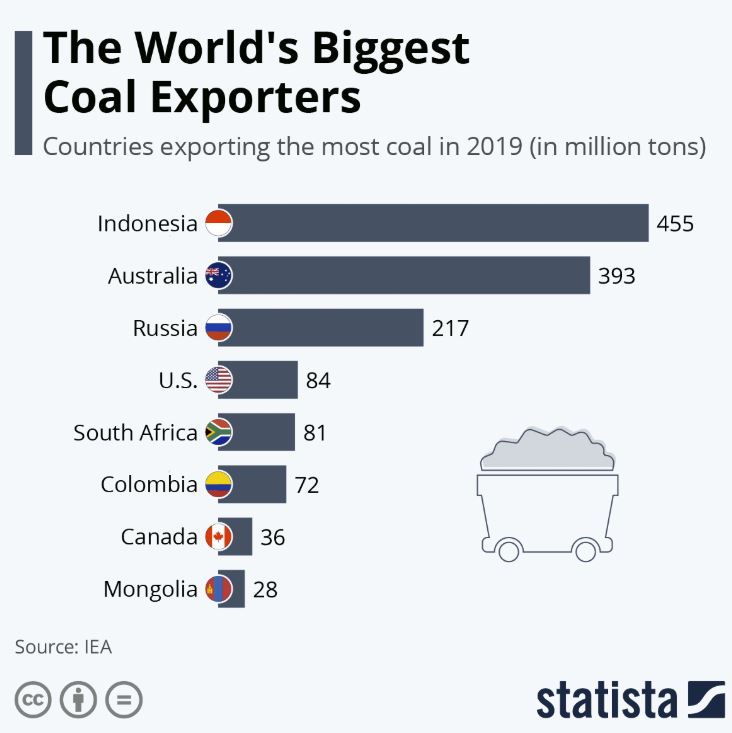 But Australian coal has a significantly higher calorific value than Indonesian, Chinese or Russian coal. This means it produces more energy per tonne. You burn less coal to produce a kilowatt-hour of energy. Coal-fired power stations using Australian coal produce fewer greenhouse gas emissions per unit of energy than those using Indonesian, Chinese or most other coal.

This is simply geological happenstance. But it’s also reality. Therefore if we follow the UN’s diktat we increase carbon emissions globally and impoverish ourselves.

Between thermal coal and metallurgical coal we typically earn well over $40bn in coal export income every year. We derive billions upon billions of dollars in royalties and in the tax payments of the companies and their 40,000-odd employees. The idea that anything substitutes for this in the short term is nuts.

Australian coal is a symbolic target.