The irony — the renewables propaganda was so overdone that the EU and UK got caught with their pants down without enough stable fossil fuel powered electricity. European investors were so afraid gas and coal would be stranded assets that they stopped building reliable power generators. Russia supported the “anti-frack” movement in the West in order to sabotage competition, and now wants to squeeze a hot deal on its Big New Pipeline, so it has reduced the gas supply, so gas prices are headed for record highs and businesses are collapsing, food shortages are predicted.  In the short run coal is being reinstated — Drax is thinking of keeping coal plants running. But the only long term path out of the Green-Energy-Quicksand without breaking the sacred “anti-carbon-dioxide” jinx is with nuclear power.

So thus, the greedy power grab and profiteering by the renewables industry, the globalists, the Chinese, the Russians and the Greens may force out cheap coal in the long run, but accelerate the dawn of a new era of nuclear power. 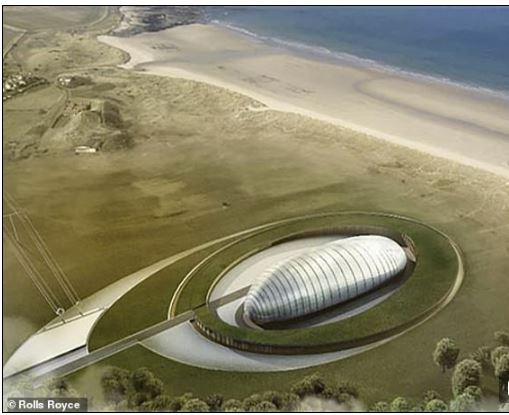 According to the Sunday Times, a consortium led by the engineering firm has secured the necessary £210million to get matching funding from the taxpayer.

Business Secretary Kwasi Kwarteng is poised to approve funding for British engineering giant Rolls-Royce to create a fleet of mini-reactors.

Ministers are understood to have adopted a ‘change of focus’ towards nuclear power amid the current crisis caused by rocketing global wholesale gas prices.

It comes amid news that Chinese investment in Britain’s next generation of nuclear power stations is set to be banned on security grounds.

Mini reactors, known as Small Modular Reactors (SMRs), generate around 450 megawatts of power – around a seventh of what a conventional power station such as Hinkley Point produces.

ADDENDUM:  Maybe Russia doesn’t have the gas to spare?

At least one commentator thinks there is more to it:

[Ben] Luckock said he was skeptical that Russia, the biggest gas supplier to Europe, was intentionally tightening the market for political gain, suggesting that Moscow was already pumping as much gas as it could right now.  “It’s easy to say that’s politically motivated, but I think it’s simpler than that: Russia is facing maintenance in many gas fields, very low domestic inventories, substantially increased flows to Turkey, and Gazprom is struggling to increase production,” he said.

Luckock is head of Oil Trading at Trafigura Group.