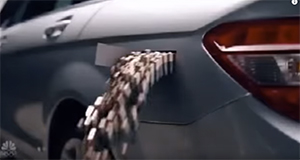 The people don’t really want Electric Vehicles, so the US Government is thinking of forcing them on the buyers by squeezing the industry that makes them. There is talk of new rules which apply to the companies selling cars. The control of production could be hidden in something called the Corporate Average Fuel Economy or CAFE standards. By averaging the fuel consumption across a whole company,  those brands will have to find a way to sell more EV’s and to limit their own sales of gas guzzlers. It’s a supply and demand thing, if a company can only make so many large internal combustion engine cars, the prices of those will be artificially high. Only the wealthy will be able to afford them. The poor will still pay more for cars than they do now, but the cheapest cars on the market will be EV’s — subsidized by inflated prices on petrol driven cars.

This is just a thought bubble for now, but obviously, the message is to buy your big cars and look after them. They’ll be hot property in the second hand market.

Say goodbye to the free market: The Soviets would be proud of it

The way it works will be well hidden. Instead of telling you and me what we can buy, they in effect tell the car makers what they can make. I am not making this up.

The result is rationing and it has been for many years. The car makers limit the production of bigger cars and trucks, with higher fuel consumption, to stay below the standards. In reality what is rationed is stuff like power, size and safety. I have even heard that they raise the prices of big cars to cut the prices of little ones. This is called a cross subsidy.

So it sounds like the CAFE standards are going to be ratcheted down over less than a decade, until 40% of the vehicles sold are EVs.

Hopefully this abuse of the efficiency standards will be found to be illegal.

But as David goes on to explain, the Brits have their own form of weird plans to make big trucks run off electric overhead wires? See “Trolley Trucks” and read it at CFACT. 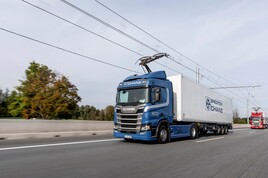 Imagine having hot wires strung just above all the nearly 50,000 miles of interstate highways, carrying enough juice to power all those big trucks. Massive accidents waiting to happen? How about them ice storms?

Seems like the wires will only run over the slow lanes, so maybe just 100,000 miles worth.

Blackouts due to unreliable electricity grids will clog up the roads and cripple the country. Good target for foreign adversaries.