What a can of nematodes

Fully-vaccinated people who catch Delta Covid variant really may be JUST as infectious as the un-jabbed, Government figures suggest

But health chiefs insisted the current crop of vaccines still cut the risk of catching the virus in the first place.

Vaccination clearly isn’t going to stop the spread, eliminate the virus, or do a lot to protect your loved ones or work colleagues. It makes it hard for companies to justify mandatory vaccination “for the greater good”. The question, “Would you sit next to an unvaccinated person” isn’t quite the loaded probe it was. And you can always reply: “Would you work with someone who was Vitamin D Deficient“? I mean really, they are defenceless.

When will companies set up mass Vitamin D testing and free supplements?

A couple of weeks ago the Israeli data suggested only 16% of people were still protected from infection six months after vaccination. Presumably Governments will argue that vaccines still reduce the burden on the health care system but new mutations may render that moot too.

The lines that matter in the graph below are the three in the bottom right. That’s the viral loads of the vaccinated, and unvaccinated, with Delta variant. The lines trailing up on the right are probably the last vestiges of the old alpha (UK) variant which only exists anymore in long recovering patients with low viral loads. 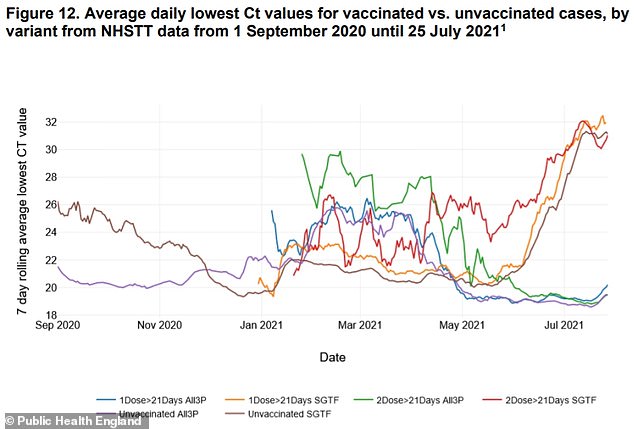 The graph shows the Ct values for people who catch the Alpha variant (called SGTF, shown in orange, red and brown) compared to those who catch the Delta variant (called All3P, shown in blue, green and purple). Ct values reflect the amount of the virus found in people’s positive nose and throat swabs, with higher numbers equating to lower levels of the virus. Public Health England compared levels between unvaccinated people, those who have had one dose and those who are double jabbed. It found that Ct values were almost identical, regardless of a person’s immunisation status

Being low on this graph is bad (for us, if not for viruses). The lower the Ct value, the higher the viral load. When there is hardly any virus (or fragments thereof) it takes a lot more cycles to detect and so has a higher Ct value.

Meanwhile, it was only slightly higher for fully-vaccinated Brits (18).

There are qualifiers, but it is an act of some optimism: We don’t know if the ages of both groups were the same, and if the vaccinated group were older they might have lower viral loads than unvaccinated people their own age. We need to follow both groups through their infections as they progress to know what the real peak is. These groups may have got tested as different points on the curve.

But the figures are similar to the US findings and the US CDC said “wear your masks” to the vaccinated:

The PCR test picks up fragments of the virus, not whole virus, and viable virions are usually much lower in number but that probably applies to both groups equally.