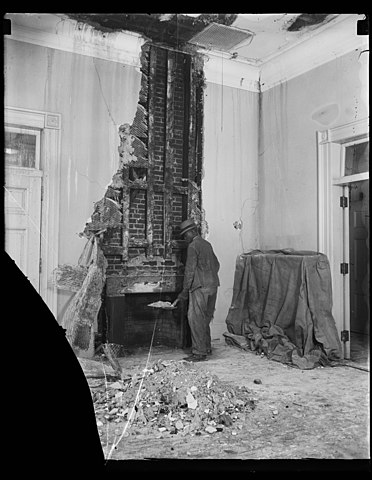 Stepping right into the fray here with the hazmat suit on.  Some very bright people are missing the point of locking down with only one known case.

Imagine a virus is like a house fire. When the flames start, we don’t say, “it’s just a curtain, it’s only 1% of the house.”

On Tuesday, New Zealand found one sole Covid case and locked down the entire nation immediately at, like, Defcon level 4. Which sounds bonkers, understandably, to someone living in a place that’s had 38 million cases. But the brilliant Glen Greenwald, bless him, just got this one wrong. “They seem demented (and) oblivious to the costs of sustained isolation” he said, at a point when NZ had sustained all of 13 hours of isolation its first national lockdown for a year.

In similar form, the excellent Nigel Farage, declared Jacinda Ardern had lost her marbles. In response to the foreign critics like these,  defiant New Zealanders flocked to the #NZhellhole hashtag and let rip with thousands of scenic photos of ski slopes and beaches mocking what a tough life it was in the NZHellhole prison. 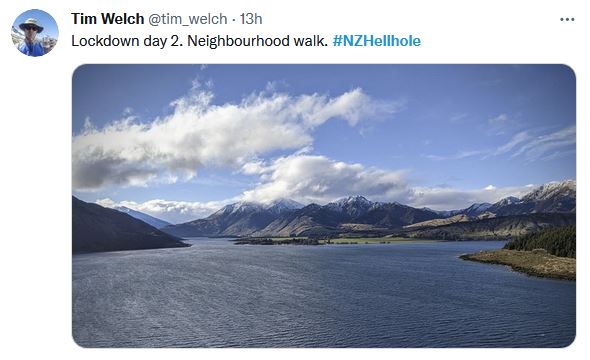 It’s worth mentioning at this point that the death rate in New Zealand of the whole Covid pandemic so far has been just 5 per million — which is 7 times smaller than the Australian death rate and 380 times less than the US and UK.

Think of a bioweapon outbreak like a spark on dry grass.

Exponential growth changes everything. Once there is an uncontrolled flame, the best time to put it out is straight away.

Furthermore — If the strategy is going to be a lockdown of any sort sooner or later — because the hospitals will break at some stage — then every day that passes makes the eventual lockdown longer and more horrible. We can have lighter lockdowns or shorter lockdowns, but not both. 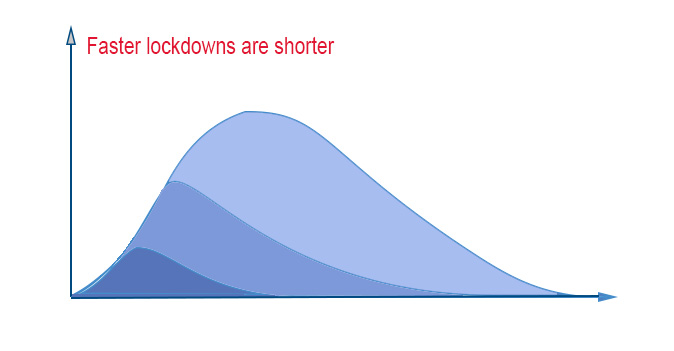 A graph with no data, no units and no numbers because it’s pretty obvious.

So we’re all watching New Zealand in another round of Epidemiology-Games. It is the Delta variant, and they’ve now figured out it came from Sydney making it a clean sweep of infection spreading Delta from NSW to every state and nation in Australasia.

This is still democracy in action. Most New Zealanders probably figure it’s better than Gladys’ plan:

…a disastrous outbreak of the Delta variant in Sydney has helped galvanise New Zealand’s “team of 5 million” – and across the country, the government’s tough strategy on Covid-19 has enjoyed widespread popular support.

New Zealanders have consistently supported even the toughest anti-Covid measures. About 80% rated the government’s Covid-19 response as overall good, according to polling commissioned by the Spinoff in February, and 59% rated the response as “excellent”.

Eliminating Bioweapons has its advantages:

New Zealand’s strict border controls have allowed citizens to live relatively normal, unimpeded lives for most of the past year – complete with packed restaurants, music festivals, and uninterrupted schooling. The country has surpassed the US and UK on measures including unemployment, quality of life, freedom of movement, and debt to GDP ratios. It has also suffered a relatively tiny number of deaths, hospitalisations, or serious illness and disability from Covid-19.

“We have spent very little time under restrictions compared to other countries,” says Wiles. “And we know that the stricter those restrictions are, if you use them well – we’ve lived those benefits. We’ve been living in this incredible bubble.”

But here is a surprise…

Instead of going into overdrive to put people in long queues to get vaccinated, the New Zealand vaccination program has been suspended entirely. Presumably it will start soon with drive-by vaccines or some format that reduces the risk of spreading Covid.

Vaccines are slow medicines for a fast virus which increase the spread of the virus now, in order to prevent infections in a couple of months time.

Prime Minister Jacinda Ardern has announced Covid vaccinations will be suspended for 48 hours due to a nationwide lockdown. “We want to ensure vaccinations can still take place in a safe environment… we will be providing a further update in the next 24 hours,” Ardern said this evening.

She said officials would be considering whether drive-through vaccinations were the best option and what other precautions could be put in place to ensure it was safe. Director-general of health Ashley Bloomfield echoed Ardern’s comments, saying we wanted to minimise movement as much as possible.

This is what a health department does if it is serious about stopping the spread rather than just being a promotions machine for Big Pharma, not mentioning any names Gladys Berejiklian.

This may seem like an esoteric discussion to people in places where elimination seems impossible, but in the Bioweapons Cold War Era, we still need to get this right. There are 1600 more bat viruses in the freezer at Wuhan.

Fire in the Whitehouse 1929: Wikimedia