At some point, the ice sheets want their land back

We’re balanced at the end of a ten-thousand-year warm spike, in an ocean of ice-ages, reshaping our economy to try to stop a half a degree of warming.

Ken Stewart compared the current interglacial with the last three, and found our favourite – the Holocene — has already run longer than all of last three did.*

Global Warming or Global Cooling: Keep an Eye on Greenland

There are several ways of identifying the start and end of interglacials.  I have chosen points when Antarctic temperatures first rise above zero and permanently fall below zero relative to 1999.  Graph 3 shows the length of time between these points for the previous three interglacials compared with the Holocene. 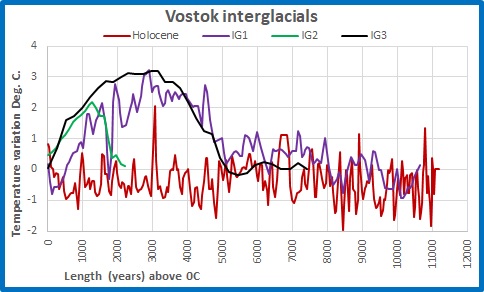 The Holocene has lasted longer than the previous three interglacials: and is colder.

The point where the green, black and purple lines end is when temperatures fell permanently below our current baseline temperature (1999 give or take a decade). We can also see just how tame the current interglacial has been — with all the others getting 2 – 3 blockbuster degrees hotter.

The key question is when does a little ice age become a Big One? Where’s the point of no return?

Possibly it’s the point when the Northern Hemisphere turns into a giant white mirror:

Many scientists think glacial periods start when summer insolation at 65 degrees North decreases enough so that winter snowfall is not completely melted and therefore year by year snow accumulates.  Eventually the area of snow (which has a high albedo i.e. reflects a lot of sunlight) is large enough to create a positive feedback, and this area becomes colder and larger.  Ice sheets form, and a glacial period begins.  This is a gradual process that may take hundreds of years.

Well before global temperatures decrease, the first sign of a coming glacial inception will be an increasing area of summer snow in north-eastern Canada, Baffin Island, and Greenland.

Despite fifty years of greenhouse gas production, snow on Greenland isn’t melting away in summer as much as it used too. If this trend continues, Ken calculates Greenland might be completely covered in snow all year round in just 45 years. 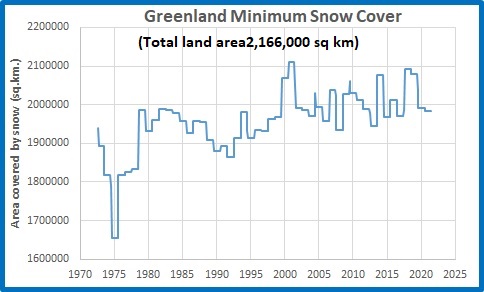 But as Ken says, it’s only a short trend, and the Little Ice Age was colder but didn’t trip the albedo feedback loop and plunge us into a Big Ice Age, which was very convenient.  We probably have a few centuries yet.

More to the point though — if climate models actually understood the climate, we might know the answer. What are our governments doing about that? They’re working hard to make the planet cooler, which is probably the best thing they could do, since they’re so bad at it, they might unwittingly help.

If the start of the endless winter was 50 years off, would we even know or will we still be holding UN Conferences to stop the warming as the Ice sheets reach Ontario?

Thanks to Ken. Go and say hello at his blog. It’s great work.

*Inasmuch as water evaporating off then falling as snow at Vostok represents global temperatures.