Chevron spent $3 billion to put just 5 million tons of carbon dioxide under the ocean floor. The project was plagued with delays and problems with sand clogging the machinery.  They captured about one fiftyth of the Chevron emissions in a five year period.

CCS is a modern industrial talisman:

Chevron is understood to have spent more than $3 billion building the carbon capture facility, but it took several years after the start of gas production for the Gorgon CCS project even to begin operation due to delays and technical difficulties. The first CO2 was injected into an undersea deposit in 2019.

It is understood regulators may ask Chevron to offset the emissions it failed to store by purchasing offsets from either local or international carbon markets. If Chevron is made to buy Australian Carbon Credit Units, which currently trade at above $20 per tonne, the cost to the company could easily exceed $200 million.

So they could have done it all 30 times cheaper. (Or, if they had used it to grow plants and make beer they might have broke even and made something useful.) 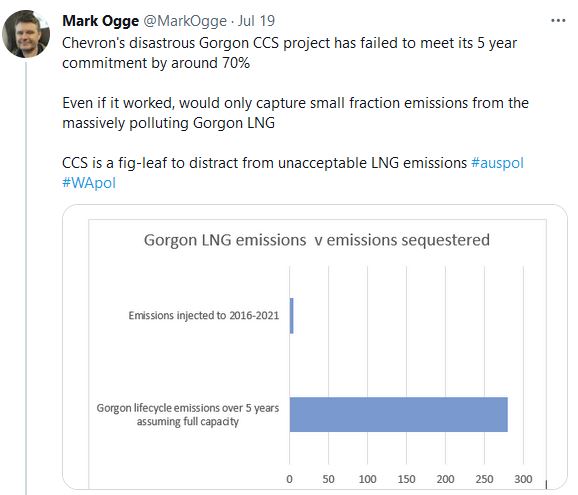 The Australian taxpayers put in $60m which could have been used, say, to add one medical MRI in every capital city.

CCS is a fantasia wand for weak leaders who don’t want to brave up and just say “Carbon is useful”.  Greens know it doesn’t work, and so do skeptics.