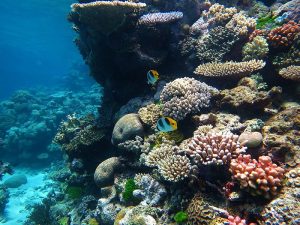 Ever since Australia asked for an investigation into the source of Covid, China has been accidentally-on-purpose sticking pins into our trade deals. Pop went the wine, coal, beef, barley and lobster markets.

Now after concreting corals reefs in the South China Sea and plundering the Galapagos, China is suddenly concerned about the Great Barrier Reef.  Overnight Chinese players in the UN have pushed it to the top of a list that had 82 more fragile ecosystems ahead of it. Pop, goes the tourism trade as the headlines ring out that UNESCO says the Reef is “in danger”.

At the moment, the only tourists that could possibly be frightened away are a few New Zealanders, because no one else can easily get around the two week quarantine. But when flights reboot, Australia just needs to send photos of the glorious corals to the world and “pop” goes the UN and China’s reputation.

That would “pop” some of the CCP web of influence. What’s a Veto of a dead committee worth?

How many other environmental scares have been pumped and carved to serve Beijing?

If China is so adept and willing to use fake environmentalism as a cold war weapon, what other environmental knobs have they turned?

China-led ‘ambush’ on health of the Great Barrier Reef

Australia has been blindsided by a push by a China-chaired UN committee to declare the Great Barrier Reef “in danger” without proper consultation or scientific process.

Any downgrading of the reef’s status would threaten the 64,000 jobs and $6.4bn in tourism revenue linked to the natural wonder in a normal year.

Australia is a member of the 21-nation World Heritage Committee, but the body – under the chairmanship of China’s Vice-Minister for Education Tian Xuejun – is considered likely to accept the recommendation.

China also holds the position of UNESCO deputy director-general, the presidency of ­UNESCO’s International Union for Conservation for Nature, and is head of Asia at the World ­Heritage Centre – all three of which contributed to the World Heritage Committee’s draft ­decision.

The World Heritage Committee has not visited the reef since 2012, and there has been no mention of an “in danger” listing since 2015.

Commenters at The Australian get it:

AndrewL:
Where is the UN Committee on Democracy Heritage, which could declare free elections (and everything else valued by champions of liberty) endangered in China? What a joke.
Mark:
Perhaps we should pour a heap of concrete over the reef and build a military base on it? China wouldn’t say no to that.