It was ten degrees below normal at Scott Base, in June, and usually July is the coldest month. 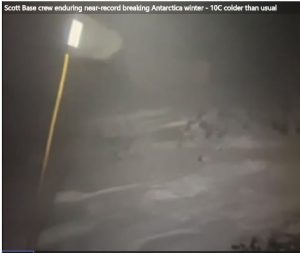 Pitch black, minus 81C and a howling wind.

Spare a thought for the hardy crew who are wintering down in Antarctica, experiencing near-record breaking cold temperatures.

They’ve come very near to the coldest ever recorded temperature of -89.6C.

Cap Allon at Electroverse points out that some of that Global Warming has made it up to New South Wales where it had the coldest June day in 122 years two weeks ago.

A few weeks before that, Dunedin Airport New Zealand hit a record of minus 8.8C in May. It was the coldest day ever recorded there in any month since records started in 1963. One cold day doesn’t mean a lot climate wise, but if Antarctica was close to record warmth would most of the worlds media have barely said a word?

Remember the poles are warming twice as fast as the rest of the world.