Mutations of SARS2 are roaming. Currently there are 19 million active (known) cases of Covid. Due to copying errors, mistakes are accumulating in the genes of the virus. It’s a relentless process of trial and selection. A trillion monkeys on keyboards blindly working its way around vaccines, and immune systems. To beat this, we need to understand it.

Below is a map of known variants created from the samples which have had full sequences done. This is the remarkable “Nextstrain“ — an opensource tool. I have labelled a few clusters by their “country names”, (though we’re not supposed to do that. Let’s all say “WuFlu”.)

The family tree of SARS-Cov-2 starts at the bottom left corner with two samples from Wuhan around Christmas 2019. This is called the 19A clade, which appears to have almost died out now, though there are still remnants left of this original virus in corners like Iran and PNG. Otherwise, the Wuhan 19A virus has been superseded by its children.

The branches and time marches to the right.

The code for one full virus is 29,000 bases long and as best as I can tell, all the dots on the branches have been sequenced in full. At the Nextstrain page you can mouseover and click on every point to find out which lab and town the sample came from, and which mutations it has.

Be aware the “tree” above is heavily shaped by the nations doing the most testing and sequencing. Australian labs pop up often, sampling the cases flying into airport quarantine. But India has done very little sequencing and Mexico even less. Some African nations have virtually none. So there will be thousands of invisible branches and strains that we can’t see above, because no one has tested them.

The only reasons the Indian and Brazillian variants are not branching as much as the UK variant is because those variants haven’t yet dominated countries which do a lot of sequencing. That not-so-fortunately is about to change as smart wealthy countries have, daftly, let these variants in.

The UK variant has spread far

These graphs below on the Nextstrain Covariants by country page show the predominance of each variant. The UK variant is marked as an orangish brown. It was first noticed in October last year, but within a few months was responsible for nearly every infection in the UK. Similarly, throughout the European lands the takeover is almost complete.

The US is a different cauldron. There, the pink zone is successfully competing with it in the USA graph is the Californian “484K” variant. But starting to spread are both the #P1 Brazillian variant and the Indian ones.

But the strains that will dominate in just a few months time may be invisible now.

The graphs below show that the newer faster-spreading variants usually wipe out the older slower ones. Partly this is because a new strain brings a new wave, and as infections rise (not shown in these graphs) the proportion of older strains is squeezed out. But in the end the faster-spreading arrivals breach the previous norms for quarantine, restrictions, and hospital care. After new cases rise rapidly and set off alarms, governments and citizens inevitably raise their own level of response. The new stricter restrictions, by default, then wipe out the old slower variants. Obviously, some combination of restrictions, masks,  isolation and lockdowns work — starving the old variants out of existence by depriving them of new bodies, but at great expense. The cheapest restrictions, of course, start at the border. (Just stop the flights!) A hard border means almost no need to lockdown. It also means no new mutants arise within that country. 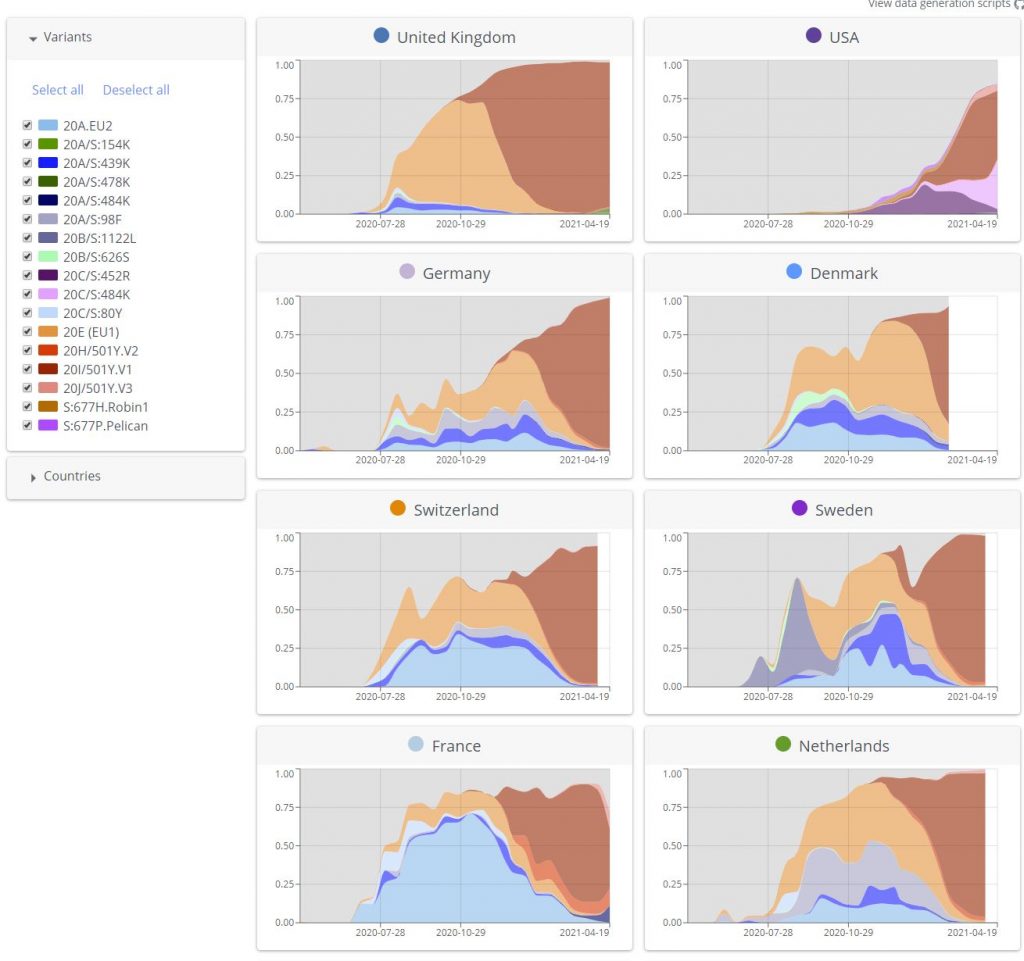 The UK variant has taken over nearly everywhere in Europe. The grey background were the unknown variants.

It’s barely visible above — but seeping into the latest UK data (top left graph above) is a tiny barely visible, green wedge. This is the ominous strain from India. In India, the new double mutants are growing rapidly, but despite the catastrophe unfolding, they’re still only half of all the samples.

Most of the variants in India are “grey”. Not known. 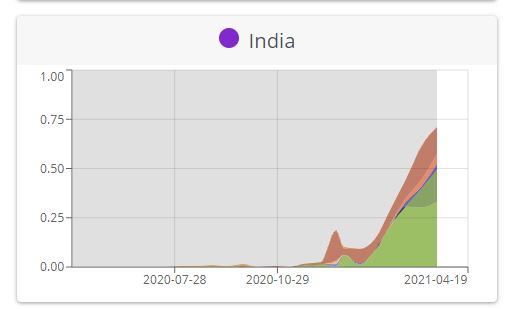 The Indian variant has arrived in South Korea. See how fast it is growing. 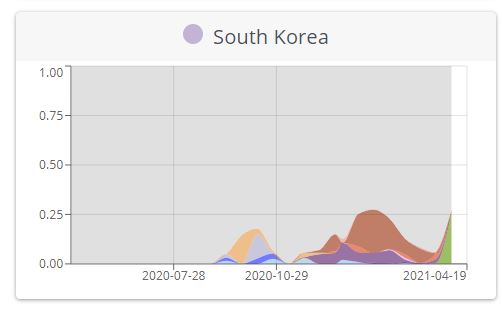 To appreciate how much data is held in this system, here’s the information for one “dot” in the orange section growing from the “UK Variant” branch. A 41 year old man was diagnosed in Raipur India, 3 to 7 days ago. His sample was sequenced with a full list of mutations. (To see this, mouseover a dot, then click inside the black small data box to see the larger more detailed one. Or not. It’s a nerdy thing. But you will be able to appreciate just how far and fast these versions are travelling.) You can, if the urge takes you, trace the branches and see how often the strains are leaping borders. Even if you are a data nerd, and not a Covid one, the Nextstrain system is impressive. The data can also be sliced by country, by region, by strain and by mutation. Scroll down — agog. Click particular strains in the legend to clear the clutter out. 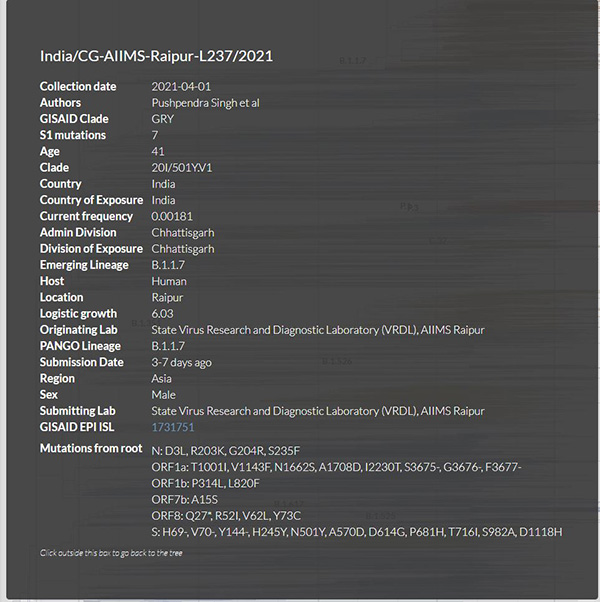 The virus exists. PCR is useful. The virus has been sequenced in full many times. Symptoms and transmissibility are linked to different variants. Never before has the world had live data like this. Yet we still need more. There is almost no data from so many countries that matter.

The variants are coming — as long as people are getting infected somewhere, this virus is adapting. New variants may well throw a spanner in the works of vaccine programs, and natural immunity. Herd immunity to a virus that no longer exists may not be useful, and in some cases can be a disadvantage. Eliminating the virus stops the mutations arising. Vaccination will slow the development of new mutations locally, but once they arise it will select for viruses that escape the vaccination.

PCR looks, smells and acts like a useful test. The PCR test is used to sequence viruses (and to do legal, forensic, medical and paleo-fossil studies). Like any tool, it can be overdone, abused, or faked. But the tree at the top of the page was made with a continuous branching structure and with data from hundreds of independent labs on five continents. That suggests, Occams razor style, that despite the masses of money and vested interests doing their best to skew results, that the bulk of these PCR tests and mapping would be hard to fake.

Restrictions are eliminating strains: That less infectious strains are universally wiped out shows that restrictions (as expensive, ugly, and unpopular as they are) do work. If the higher restrictions were used, without the presence of the newer strains, obviously that would eliminate all versions of Covid. (See Australia, NZ etc). As the virus gets more infective and transmissible, restrictions would need to be harder and faster.

Eventually a nicer strain of Covid will probably arise, one which doesn’t overwhelm hospitals. It may however become a nastier strain on the path to being kinder. Spanish flu did that and took three years.

We need antivirals: The arms race means there will be an ongoing competition between our immune systems, vaccines, anti-virals and new strains. “Herd immunity” is likely only a temporary illusion. Antivirals that act on our enzymes or entry portals are more likely to work against multiple strains because our biochemical machinery isn’t changing like the virus is, and it’s much harder for the virus to find a new port of entry into our cells, or a new path to hijack. If we used antivirals as well as vaccines, we’d prevent more mutations and eliminate clusters faster.

This is why it is still a rank scandal of the highest order that our public medical research dollars have not focused first on antivirals and our public health responses failed to do the most useful, cheapest restriction of all — just closing borders. Anthony Fauci should have been fired a year ago.

The UN WHO is responsible for every case outside China which could have been stopped. It was obvious to anyone with microbiological training on Twitter by February 2020 that the borders should have been sealed.

The WHO should be defunded immediately. It serves the CCP but fails the world.

The Indian strain looks bad, it’s hard to tell how bad, the data is awful (as in, poor testing, inadequate sequencing, high positivity. What’s the actual mortality rate? Who-the-heck knows. ). The governments dilemma is the competing duty of care to people at home versus abroad.  One case getting into the community could cost millions to resolve. But we owe it to citizens to find a way to get them home. I’d like to see us offer them tents near military air bases (or something!) and give them at least one path to return? It’s not five star, but it might still be better than a small apartment in Delhi. Those with better options will just wait. The desperate will be grateful to get home anyway they can.