Who voted for Superannuation funds to decide energy policy?

And you thought we elected a government to manage our National energy policy?

Businesses must adopt Paris emissions targets even if the government fails to do so, big investors say.

So even if voters don’t want “climate action”, by default, it’s sneaking in the back door, unless they pay attention.

The “big investors” in this case being a small team of activists running a club that some Superannuation corporates have joined, though it’s not clear why. Perhaps they joined to “look Woke” or perhaps they are feeding the crocodile for fear of being targeted?

The Australian Council of Superannuation Investors (ACSI) is not trying to persuade funds or investors to go Green with reason, instead they seem to operate by Cancel Culture principles on a corporate scale. Their aim, apparently, is to bully Directors of your Superfund into themselves bullying the companies they invest in. In a Saul Alinsky fashion they effectively threaten Directors that they might be personally isolated and targeted if they are not seen to be supportive enough of the Woke religion (ie, climate, slavery, femo-glass-ceiling stuff). Somehow ACSI may “recommend members vote against the re-election of directors”?

In Australia the government forces everyone to put money into “Superannuation” (like the 401K in the US). ASCI gets some of that forced money from the Superfunds as membership fees, then, in turn, demands companies use your money to achieve something you wouldn’t have voted for or invested in yourself. It’s big bucks. ASCI has a “membership” of 36 Superannuation funds: together they manage over one Trillion dollars worth, or as they say… they “own on average 10% of every ASX200 company”. Last year ASCI creamed off nearly $4m in fees for themselves from superfunds in order to put greenie-woke pressure on superfunds. See how this works?

SBS leaked the news with glowing praise last night that ACSI was going to target (and bully) Directors of companies that were more concerned with making profits for you — rather than with meeting the Paris agreement. The shame!

This week ASCI has a “new climate policy” thus appointing themselves rulers and Science Geniuses.

If the media exposed this power-grab and activism, people en masse might pull their funds out and Superfunds which indulged in these pointless “fashionable” councils for misusing your money would abandon them. 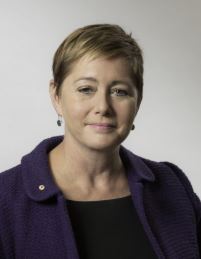 “Instead of just asking people to report and to talk to us about what they’re doing, we’re now saying governance for this sits with the board, and we will hold the board accountable if we don’t believe that the company is doing as much as they need to on climate.

“Climate change risks are deeply embedded in the financial system and impact all sectors and asset classes. For long-term investors, this poses a serious challenge to long-term value creation across investment portfolios.”

ACSI’s “active and constructive engagement” with the top 200 listed companies had led to improvements in company practices, she said, as she cautioned that more needed to be done.

“Not all companies have listened to investor expectations … In order to increase the focus on climate-related risks in the companies they invest, ACSI may recommend members vote against the re-election of directors.”

One of the mysteries is why any fund would be a part of ASCI? What do they get? According to ASCI, they get lectures, and the opportunity to join their board and lecture other people, but not much else.

Is membership of this group just driven  by spineless fear or is it an advertising strategy?

Time to vote with your dollars

If your fund is  listed here, it would be helpful if you wrote to them to ask why they are members of a group that specifically says its aims are “not on returning a profit to shareholders”? Does your superannuation fund support you or the Religion of Woke? If they don’t give a satisfactory answer let them know you plan on finding another fund, and on spreading the word. If you get a response, please share it with us.

Who is this energy and climate genius — CEO Louise Davidson?

She knows a lot about generating electricity and making profits (not):

Appointed as the investor group’s chief executive in April 2015, Ms Davidson has more than 20 years’ experience in the financial services and superannuation industry.

She joined ACSI from Cbus, where she managed their Environmental, Social and Corporate Governance (ESG) investments.

Who’s happy to hide their role as corporate bully?

Ms Davidson says ACSI often gets described as “social activists”, but the intent is not to act against companies. She says it is to engage and help them become more successful and profitable.

It’s just another way to take power out of your hands.

But all’s fair in love and war, and they are taking advantage of sleeping investors who think they can give their money to other people without paying attention. Parasites wouldn’t get away with this if the media cared, the politicians were brave and investors were able to invest in funds that “chose cheap profitable energy” over Voodoo and fads.