The Sequel is out– Absolute Interference is the followup to the Absolute Proof video is out. There’s new information in here, more details, cross checks, and missing pieces. The vote rigging appears to have happened across every state and county. The software is opaque, no one can check it. We’re told the machines are not connected to the internet but they are. The Democrats were worried about the electronic voting machines a year ago but now, it’s just a conspiracy theory. US intelligence agencies say that cyber attacks from foreign entities are happening regularly. In Dr Franks analysis of Ohio (a state thought to be okay) there was an improbable 100% registration in all 88 counties, and the same voting proportions in each age bracket in every single county.  In other news, it looks like poll workers may have had phones built by a Chinese electronics company that acted as a wifi hot spots sending messages back to China.

“Proves we had foreign interference in our election”.

It’s history in the making — the highest stakes, most aggressive political battle since the cold war, but this time the US is losing. Things can still be turned around, but will they?

In January, every day the media rang Mike Lindell right up until Feb 5th when his video with the evidence  AbsoluteProof came out. Then the phones stopped ringing. They wanted the evidence but when it came it was banned by Vimeo, Youtube, and when 50,000 people a minute were coming in, Facebook put a big sign over the footage, saying it contained “nudity and profanity”.

If this video disappears, search “Absolute Interference” on Bitchute to find another.

Vote flipping and rigging was widespread, across the states and counties.  All machines in New Hampshire started election day with 300 votes for Biden. There may have been as many as 35,000 votes added in Arizona.

The FBI and CISA gave alerts out warning that Iran was interfering in the election.

“We might be buying the best 21st  Century military in the world when the battlefront is Election Security. “

38 minutes: Mike Lindell interviews Dr Douglas Frank who describes how someone with an algorithm used the Census data, and changed votes to the point, where every state has 100% registration, and the ratio of registered voters to ballots cast at each age brackets was the same across the state.

He focused on Ohio and thought it would be good, but was shocked to find repeated patterns of voter behaviour across the state in all 88 counties. Not only did almost every possible voter register to vote, the same proportion of each age bracket voted in every county. 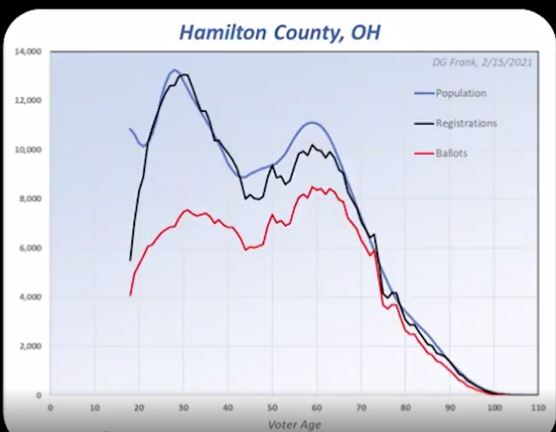 Red Flag #2: The exact same proportion voted at every age bracket across 88 counties. 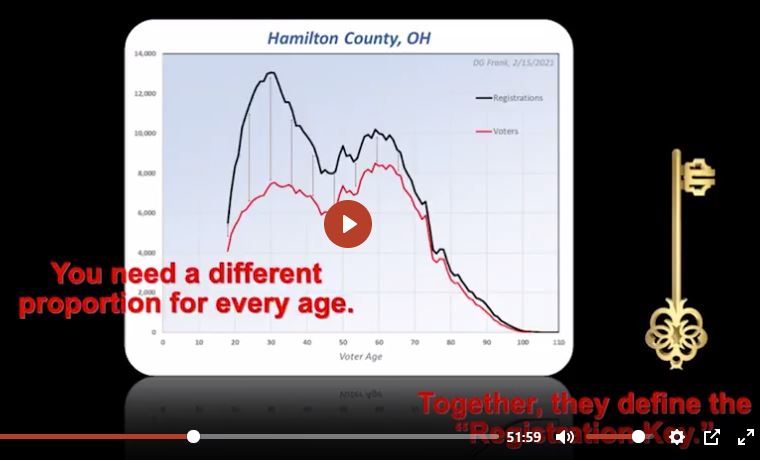 60 minutes: People ask Frank, if they were cheating in Ohio as well then why didnt they win that too?  But they didn’t need to win in every single state, and he argues that in some states they just ran out of “spare registered voters” to flip. The votes were so strongly pro Trump that there were not enough spare voters to make up the difference.

He repeats the count that in their estimates Donald Trump won around 80 million votes.

Mike Lindell argues that we were blessed that Trump won with such a huge margin that it exposed how much cheating was going on as they were caught unprepared and off guard.

1:10 Anonymous insider ” a well orchestrated poll theft” by a Chinese state company in 14 US states

Poll workers got in touch with him and they were very uncomfortable with the phone that they had. It was a 4G wifi hotspot. The manufacturer appears to be AT&T, but it was in fact  Alcatel, which is expected to be a European company, but the parent company is  TCL, the operating system is KaiOS, Google invested $22 million dollars with this. TCL is one of China’s largest electronic giants. They’ve been caught scandalously incorporating backdoors into their TV’s and weather forecast aps.

He built a Raspberry Pi detector to pick up Wifi signals and found that TCL had access to over 150 servers in 14 states. This was the Local Area Network to connect the signals detected in the international flip signals.

Mike Lindell seems very confident — he will be releasing new evidence — dumping it — across the next six weeks. He is sure the Supreme Court will consider it this time. (I’m not so confident, but that’s part of the problem, if hundreds of thousands of Americans were sure (like they should be) the energy, the outrage, the protests, and the demands on the Supreme Court could make it happen. If the mainstream media were showing the footage in this documentary — the masses would be in the streets. But Mike Lindell and everyone concerned about election fraud is up against the media blackout, the tech-giants block, the incumbent government, the corruption in the intelligence agencies and the whole Deep State inertia.

It’s still possible that good Americans can win the day, but it’s going to take real action and effort to make that happen.

It’s easy to be a cynic and say it’ll never work, the whole system is corrupt (it is). But that’s what the corrupt want you to say. “I give up”.

Spread the word instead… the good guys in this battle need all the help they can get.