Could we halve the death rate if we just exercised 25 minutes each day?

A lot of people were asked how much they exercised a couple of years ago. In follow up, about 50,000 went on to catch Covid last year. They were sorted into three levels of exercisers — the 7% most active consistently got 150 mins of week of something akin to “brisk walking” or more.  The slowest moving 15% qualified as true couch potatoes — doing less than 10 minutes of exercise a week.

These are pretty stark figures — making sedentary behaviour more risky than obesity, smoking, diabetes and high blood pressure. Which all seems a bit surprising given how many hours of data collection and TV commentary has been spent on all the smaller risks. How did we manage to miss one of the most important variables there is?

Exercise is “one heck of an anti-viral”

If these results are correct, it suggests most of our medical priorities are barking up expensive trees when they could be achieving so much more just by convincing most of the population to switch off the screen and go for daily walks. The real story is probably not quite this stark, but there is plenty of information to confirm the trend is real even if the slope is not as certain.

Obviously, there’s a gaping hole in public medicine which doesn’t include exercise in most surveys, admission forms, adverts, or advisories. Public policy hasn’t been tasked to ensure quarantined populations got 150 minutes of vigorous exercise each week. We get reports every night on the minutae of vaccination timetables, but the information that exercise might save your life or keep you out of hospital is a once a year kind of thing.

The problem with solving medical issues by telling people to walk the dog for half an hour is that no one gets rich. If they did, we would get the “National Exercise” report nightly — “…exercise figures across three states were up 4.2% this week, with most of the increase in golf, but less so in swimming”.

Opposition leaders would demand to know why the government hadn’t set a Zero-lost-minutes-Target where no person misses out on their 150 minutes. They’d petition for pedometers in 58 languages to be provided free to at-risk and marginal postcodes. We all know the drill, but all we’re seeing is the Black Hole of inaction.

The media, of course, could change all that. Where are they?

The Sydney Morning Herald is telling us to exercise the day we get the vaccine.

Past research on vaccinations, such as influenza and HPV, has shown that exercise – even training shortly before injection – can both boost their effectiveness and reduce the risk of side effects.

The catches and caveats

It’s an observational study, not a randomized “cause and effect” study. People were also not recorded exercising — they were just asked how much they did. And as the famous saying goes, recollections may vary.

The most intractable problem is that people who were sick or weakened for all kinds of reasons probably did less exercise too. Sallis et al controlled for all the known risk factors as much as possible, but there is still that nagging issue that to some extent exercise is a proxy for good health.

In other news, men have 1.7 times the risk of dying from Covid compared to women. Where are those activists? 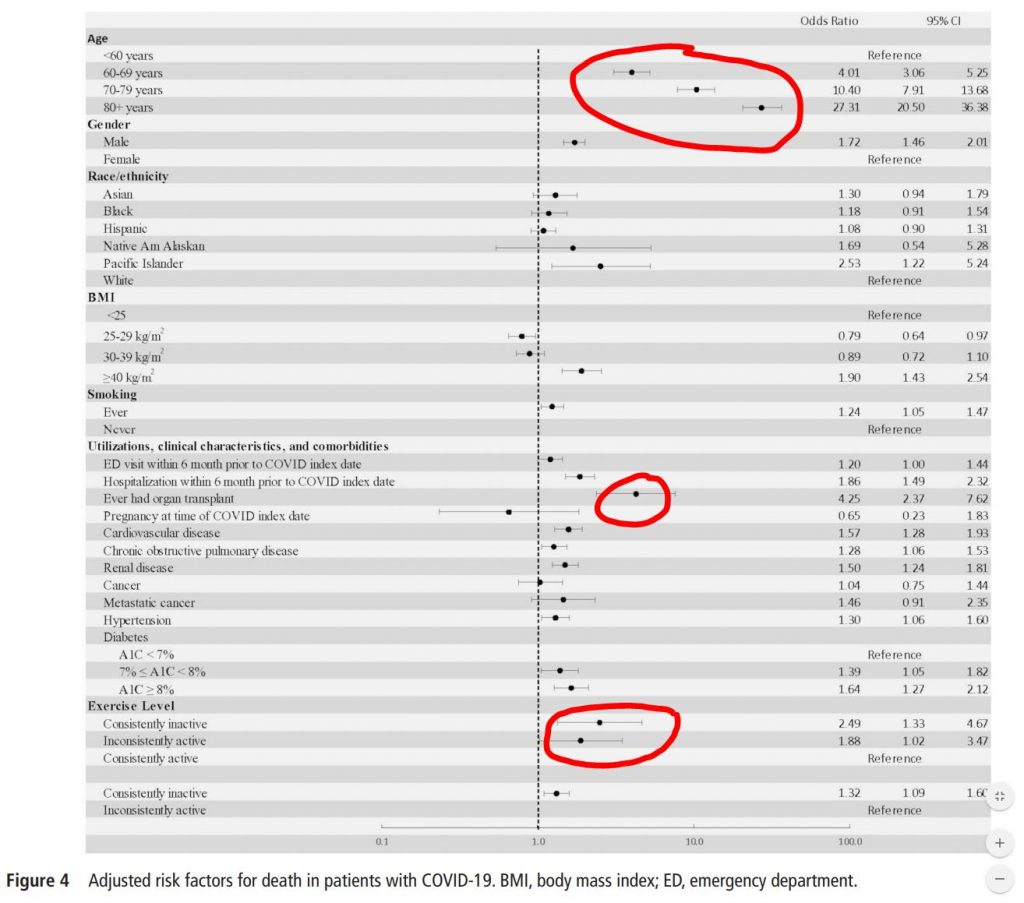