Hmmm. What one thing might unite the polarized sides of the USA?

Prof Kerry K. Gershaneck  is a former US Marine who has worked in Thailand and Taiwan in academia and military intelligence. He writes that the West thought they defeated communism in 1990. They assumed China would play nice, but they were very wrong. Instead China studied the West and Russia, and is waging a Political War. There is a whole PDF book linked under that book image. 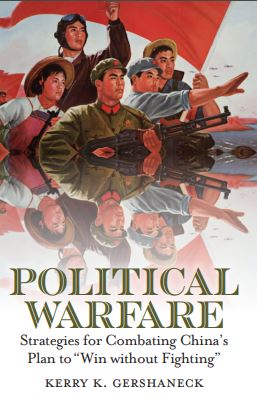 China is an expansionist, hyper-nationalistic, militarily powerful, brutally repressive, fascist, and totalitarian state. It is essential to understand each word in that indisputable description. The CCP poses an existential threat to the freedom and democracy that India and the US represent. Failure to understand the nature of the CCP regime undermines our countries’ ability to fully understand the danger the People’s Republic of China’s (PRC’s) PW poses and to build our capacity to combat it.

Officials in democracies such as India and the US have been too easily deceived about PRC’s political warfare for several key reasons. When the Soviet Union collapsed around 1990, many in our countries naively believed there would be no more expansionist, totalitarian threats. They were wrong, of course. Chinese communists still quietly harboured plans for regional (and ultimately global) hegemony. As PRC rulers proclaimed China’s “peaceful rise”, they built massive economic and military strength and engaged in global political warfare operations to subvert the democracies.
Meanwhile, the US and other democracies dismantled their Cold War political warfare capabilities and foolishly assumed the PRC would join the community of nations as a “responsible stakeholder”…

From the CCP perspective, PW is total war—it is unrestricted warfare using every means just short of large-scale military combat. The PRC’s form of political warfare is generally standard worldwide: it uses the same playbook to achieve its political, economic, and military objectives globally without having to fight conventional wars. Tailored strategies and tactics, however, are adapted for each region and country.

It’s important to understand that PRC’s PW—this unrestricted warfare—is designed to get others to do what the CCP wants them to do. The PRC says unrestricted warfare means “the battlefield is everywhere” and there are no boundaries between “war and non-war, and between military and non-military affairs”. In essence, the PRC says that everything, legal or illegal, is permissible in order to achieve its ends. Specific examples the PRC gives of how to conduct its unrestricted warfare include biological and chemical warfare and terrorism, means particularly pertinent to note and consider in the Covid-19 era.

A noteworthy recent addition to this list of PW weapons is social media warfare. The PRC uses social media to amplify its psychological warfare, intimidation, coercion, and propaganda. With social media, the CCP floods societies with propaganda and disinformation to weaken people’s faith in democracy and create political instability. In pursuit of social media dominance, the PRC has established a PLA cyber force of perhaps 300,000 soldiers as well as a netizen “50 Cent Army” of perhaps 2 million individuals who are paid a nominal fee to make comments on social media sites supporting CCP propaganda and coercion.  In conjunction with the PLA Strategic Support Force, many of these so-called “netizens” use social media to intimidate and coerce multinational corporations, celebrities, foreign governments and organizations, and critics of PRC genocide and expansionism.

This is all part of the CCP’s totalitarian thought control.

In general, the PRC’s rulers wage political warfare for three key reasons: (1) to achieve regional and global hegemony; (2) to maintain absolute control over China’s subjects internally; and (3) to co-opt or coerce other nations into becoming vassal or tributary states and to destroy states perceived as adversaries.

Download a free copy of Political Warfare: Strategies for Combating China’s Plan to “Win without Fighting” by Kerry K. Gershaneck

Prof Kerry K. Gershaneck  was a Visiting Scholar (Taiwan Fellow) at the National Chengchi University in Taipei over the past three years. He was also the Distinguished Visiting Professor at Thailand’s Chulachomklao Royal Military Academy and the Royal Thai Naval Academy. He is a former US Marine officer, and has extensive national-level strategic communications and counterintelligence experience.