Watch this space. The Western Australian election is four weeks off and the new young Liberal (“Conservative”) opposition leader has just made this a “climate change” election and launched himself to the left of the Labor Party by suggesting the state can close all government run coal plants by 2025.

Epic loss coming.  The opposition leader may even lose his own seat (Dawesville, in Mandurah, held by only 0.8%). The National Party and minor conservative parties could do well from the aftermath.

Aiming for political correctness in a politically incorrect state?

[ABC News] One major party is making the case that renewables are the way of the future, the other is warning they will cripple jobs and send power prices skyrocketing.  …it is politics as usual in Australia for the past decade. Except in this case, it is the WA Liberal Party calling for coal to be tossed aside and wind and solar to take its place, with Labor blasting the idea as “reckless”.

The Liberal Party were on a hiding to nothing before this announcement. The local Labor Premier hit 90% approval at times in 2020 with his policy of closing borders, keeping out the virus, thus letting West Australians live like Covid doesn’t exist for most of the last year. The economy is booming.

Public polling has been next to non-existent, but at least one private poll has put Labor’s two-party preferred lead at 61 per cent to 39 per cent.

The new Opposition leader, Zac Kirkup, 33, has decided to burn off his base, just in case there were still supporters who might have handed out how to vote cards on election day. He is apparently trying to win over Green voters who may give him a token thumbs up but never vote Liberal, no matter what he says, because its against their religion.

The best outcome conservatives or skeptics can hope for is that the Liberals lose so badly they drop the young green Kirkup leader the day after the election (assuming he doesn’t un-elect himself first). 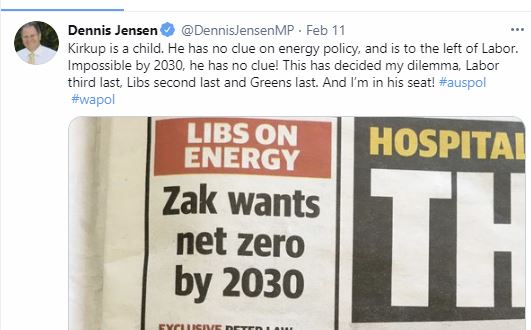 The vision of Hopey Change Ambition

This is the reasoning — it’s the past, the future, a rainbow colored vision! It’s not how you run an electricity grid:

“This is exactly in the vision of Sir Charles Court and Sir David Brand — it’s in the Liberal Party DNA to make sure we position WA for the future,” he said. “It is ambitious, but it is obviously something we need to do or we will be left behind.”

Left behind in what? A race to peak lefty fashions?

Apparently big subsidies for uncompetitive industries are now a part of the Liberal Party DNA too?

Mr Kirkup promised $400m of direct investment by a Liberal government into what he said would be the largest renewable energy project in Australia’s ­history.

Zak Kirkup has managed to make the Labor Party speak the same lines climate skeptics do:

The plans were slammed by WA Premier Mark McGowan, who said they would be disastrous for the state. “All it would mean is many, many billions of extra debt, a huge increase in family power bills, rolling blackouts across the state and huge job losses,” he said.

“The time frame they’ve put on their policy is totally unachievable and everyone should be very fearful about what they’ve just put forward.”

The Greens hate it anyway:

The WA Greens said the Liberals couldn’t be trusted on the environment.

Kirkup is evidently unaware that for every Green Job created between 2 and five real jobs are lost.

As well as this, there are millions of dollars raining for “investments” in retraining coal workers ($100m), a zero emissions Taskforce ($50m) an International Market Diversification Fund ($100m) and an Industry Attraction Fund ($100 to get businesses to go to Collie, the town where the coal power is based). Plus $50m for the Critical and Strategic Manufacturing Fund (which means PPE and “fuel security” or something like that).

I reckon this was all Morrison’s idea: Scomo to Kirkup: “Hey Zac, you take this radical climate change plan to the WA election – billion dollar renewable projects, dead coal industry, zero emissions targets, the full monte. You get smashed at the polls. Six months later I call a federal election and say: West Australians have categorically rejected radical climate action – so it won’t happen!”

But it might be a stupid plan by the Gas and Oil industry.

Watch Western Australia: It’s a small islanded grid with no interconnectors to rescue it

As well as being a showcase for how to destroy a conservative party, WA is headed to be a Renewable Energy debacle too. Current coal generation is about 30%. Four years to go!

The South West Grid serves about 2 million people, has about 6 GW of total generation and generates about 18TWh per annum. It is permanently “islanded” by ocean and deserts, and there are no interconnectors across Australia.

In the past, this has saved the WA grid from stupid experiments because it was too small to mess with. However the grand solar power experiment has run away with itself and about one in three homes have solar panels. As subsidized green power policies pushed up electricity prices, West Australians, predictably, had little choice but to add solar power as the only legal way to keep costs down. Solar PV spread across roofs everywhere is within ten years will be the largest single generator on the grid. Too bad when those cloud banks roll in…

The Duck Curve (below) continues to grow a fat belly and a wildly big dinnertime tail. The lunchtime demand has fallen to record lows averaging about 1.5GW. But the dinner time peak is still 2.5GW. Meaning a whole coal plant or many gas turbines are required to sit around unprofitably all day so they can be ready to rescue the grid every night as the sun goes down on all the solar rooftop panels.

The WA Duck Curve as solar PV eats away at lunch time demand but causes wilder ramp up demand for dinner as it shuts down.

The Muja Coal plant in WA is state government run and currently producing 850MW with units C and D. But units C  are already planned to close by 2025.  The D units are two 227 MW turbines, which were (or are) expected to run for decades.

There is a privately owned coal plant in WA called Blue Waters which was built in 2009. It has two 208MW turbines. The owners have written off the value of the asset to $0 from $1.2b because of the rapid forced rise of intermittent renewables which have eaten away the profitability for reliable power.

Unlike many other “renewable stars” the one reliable renewable source — hydro — isn’t coming to rescue the green plans. The last big viable hydro plants in WA closed a billion years ago when the Darling scarp eroded into low hills. There is no hydro industry to speak of, and probably won’t be until the next continental uplift.