If only climate modelers had warned us that children would know what Frozen Fish Tanks were?

Instead Texas spent most of the last decade and billions of dollars trying to cool the world by changing its electricity grid.

Thanks to market-distorting policies that favor and subsidize wind and solar energy, Texas has added more than 20,000 megawatts (MW) of those intermittent resources since 2015 while barely adding any natural gas and retiring significant coal generation. — Jason Issac

Indeed Texas has the fifth largest windpower fleet in the world — bigger than everyone except China, the USA, Germany and India. But having that industrial fleet of free clean energy didn’t save Texas this week. What happened appears to have been a systemic wide failure on so many levels. But one of those levels surely, is the failure to winterize the grid. There are plenty of gas and wind plants in colder places like Canada and they run through winter just fine.

But the awful truth is, that it costs more to add these “heat and de-icing” features and with everyone planning for Global Warming, well, who needs ’em?  It’s almost like ERCOT in Texas assumed the weather would never get that cold again. Like perhaps they were afraid of endless droughts, more cyclones, and deadly heatwaves, but not Arctic ice storms?

Renewables fans will point to this as mere incompetence. But if the government had built the “fifth largest nation” of windmills with all the cold bells and whistles, it would make them even more unaffordable.  Anyone with infinite money can make wind plants more useful in cold weather, but it makes them more expensive all year. 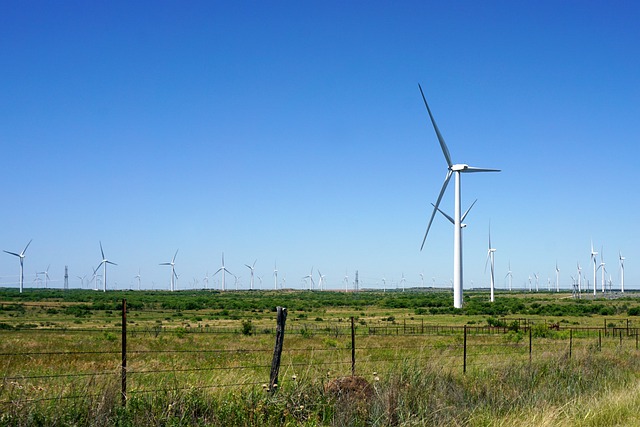 Image by RJA1988 from Pixabay

… this is Texas . . . so the need for winterizing assets has always been an afterthought. Other parts of the country that deal with colder temps annually have solutions for a lot of these issues. For example, natural gas power generation can have heat tracers on pipes, valves, and various connections; insulation around key equipment; indoor power generation vs. open to the elements. Insulation would be near impossible to implement in Texas due to the heat, but the other components could be installed as a retrofit or at the time of construction. The only problem is, it costs money. Wind turbines can be outfitted with insulated turbines, oil and fluid heaters, resin covered blades to limit ice buildup, and other high-grade components to protect the asset . . . but again, it costs money. Wind also decreases in the winter months due to the physics of how wind is created, so ERCOT already had a massive range of expected wind output: 12%–43%, and in really bad weather 6%–7%. Many of Texas’s wind turbines (except for those along the coast initially) ended up freezing, limiting total output, while solar panels were covered with snow or ice, limiting capacity. Most of the renewables in the country (especially in Texas) are backed up by short-cycle gas turbines, which are assets that can turn on in 2–3 hours. These assets are called peakers, or peak shaving, and can come online quickly to fill a growing electricity need during peak hours or surging demand, such as heat waves or cold spells. Coal can be used as peak shaving, but there are limitations: it is costly and timely to maintain because it can take 24–48 hours to bring it online, coal piles can freeze together if not rotated, etc. All of these restrictions make natural gas the preferred and cost-effective method.

Texas paid for unreliable energy, not for spare capacity

Ryan also makes the point that Texas doesn’t pay people to sit around with ready capacity. (They certainly got what they paid for).

ERCOT is an “energy only” system, which means producers are only compensated for power produced, while a capacity market provides compensation for readiness or spare capacity for power as well.

And Planning Engineer spells out just how this set the grid up for failure:

Assigning Blame for the Blackouts in Texas

Unlike all other US energy markets, Texas does not even have a capacity market. By design they rely solely upon the energy market. This means that entities profit only from the actual energy they sell into the system. They do not see any profit from having stand by capacity ready to help out in emergencies. The energy only market works well under normal conditions to keep prices down.

And he asks the key question, and the answer is “renewables”:

Why has Capacity been devalued?

If you want to achieve a higher level of penetration from renewables, dollars will have to be funneled away from traditional resources towards renewables. For high levels of renewable penetration, you need a system where the consumers’ dollars applied to renewable generators are maximized. Rewarding resources for offering capacity advantages effectively penalizes renewables. As noted by the head of the PUC in Texas, an energy only market can fuel diversification towards intermittent resources.

So the core values of a strong grid were eaten away in the haste to make the grid “renewable friendly”. Those same artificial forces pushed coal plants below profitability — and now having destabilized the grid, when the trainwreck occurs, the Greenblob wants to blame the failure on fossil fuels.

To paraphase Planning Engineer: — why would anyone build a perfectly good power plant to sit around most of the time doing nothing and just waiting for the wind turbines to fail?

More emergency peaking units [gas plants that can be brought on at a moments notice] would be a great thing to have on hand. Why would generators be inclined to do such a thing? Consider, what would be happening if the owners of gas generation had built sufficient generation to get through this emergency with some excess power? Instead of collecting $9,000 per MWH from existing functioning units, they would be receiving less than $100 per MWH for the output of those plants and their new plants. Why would anyone make tremendous infrastructure that would sit idle in normal years and serve to slash your revenue by orders of magnitudes in extreme conditions?

On Monday night that is an awfully sharp fall. That was a sharp loss of 10GW in the dead of night. Did all the gas wells freeze at once, or was there some common safety feature of automatic shut downs triggered? (I’ve seen no suggestion that there was, I just wonder). Perhaps it was the middle of the night when lots of people in Texas suddenly put their gas heater on and took the supply from the power stations? 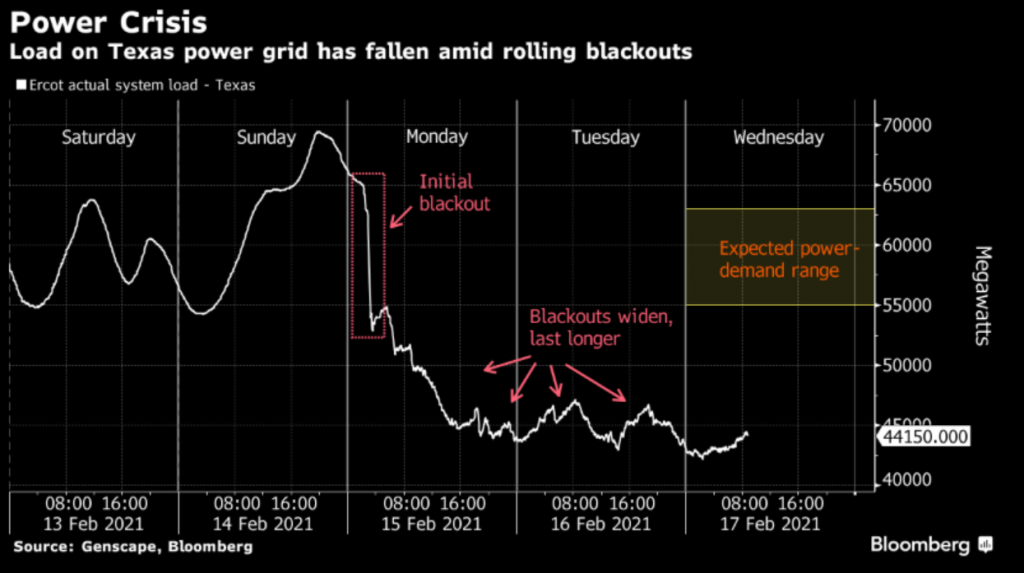 These blackouts wouldn’t have happened if Texas hadn’t shut down so much coal power.

The Green blob is trying to tell us that the ghastly blackouts was all the fault of fossil fuels — mainly because gas powered plants went offline. But the truth is that if Texas hasn’t swapped coal plants for wind towers the grid would have been fine. They certainly couldn’t run a 100% wind and solar grid. But we all know they can run just fine on 100% fossil fuels.

Bills going through the roof

Tyler Durden on ZeroHedge explains how some people are paying for power on variable or indexed plans. So when the grid gets $9,000 price spikes, their bill rockets up obscenely:

Royce Pierce told Newsweek he owes electric company, Griddy, $8,162.73 for his electricity usage this month. He said that’s a massive increase from his usual $387 bill.

“It’s not a great feeling knowing that there is a looming bill that we just can’t afford.”

Pierce was one of the lucky ones who maintained power through the entire grid crisis, but it came at a steep cost.

“There is nothing we can do now. This is already an insane thing and I don’t care about the money when it comes to people’s health,” Pierce said, adding that if the virus pandemic hadn’t affected his work, “we could have taken care of this.”

Other horror stories of soaring power bills flood local television stations across the Lone Star State. When food and housing insecurities are incredibly high due to pandemic job loss, many folks in Texas who were on variable power plans could be financially devastated.