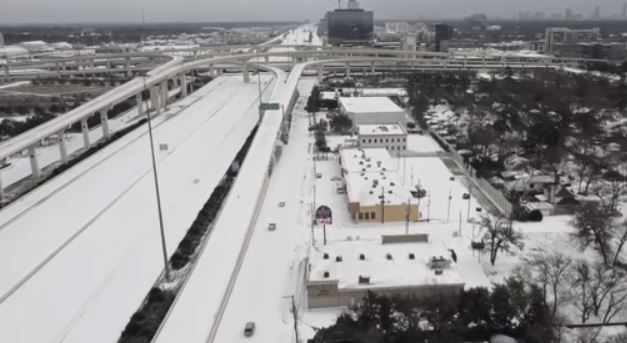 The Green Experiment could have gone so much worse. Here’s a man who was a gas industry executive involved in a near miss in New England in 1989. The four day blackout sounds bad, but it was a lottery win compared to the worst case scenarios. Not only was a full state-wide blackout possible, which may take months to correct, but the gas system is a bomb waiting to go off too.

ERCOT officials admit they only just averted a blackstart:

The Blackstart in Venezuela took weeks to restart — rebooting an induction motor takes six times the normal current. Energizing a substation can cause explosions. It’s much easier to add load to an operating grid than to rebuild one from scratch. Surges on start up can break things, that fail. It can take rolling rounds of rebooting to get back in action. (Read all the gory details thanks to Lance at the link).

But there was a potential gas powered disaster in the works too. As the cold bites, and everyone with a gas heater switches it on, the flow in pipes ramps up, and pressure falls. If gas powered plants also swing into operation, the gas pressure can fall so low that air can leak in to the pipes. The system has one way valves but at low pressure any faulty valves in the system allow air with oxygen back into the pipes. As Vic Hughes warns “Whole city blocks could be destroyed in an air/gas explosion.”

So when a big freeze arrives, the wellheads may be icing up and reducing supply at the same time as demand is exploding. In New England in 1989, gas supply fell 95%.  Hughes reports that the decisions that came next were gambles on major scales. On the one hand, the low pressure might lead to deadly suburban explosions, but cutting the gas to areas might be even worse. When every home in that area then switches on their electric heaters, the grid faces an electricity blackout as well. As blackouts spread, homes switch on their gas heaters, and so it unravels.

An Insider Explains Why Texans Lost Their Power

To maintain safe gas pressures, the operators wanted to shed load with localized gas shutoffs.  Since all non-critical gas loads had already been shutoff, only critical loads were left.  This included houses and hospitals.  To save the gas grid, the operators had to cutoff gas to a very large number of customers.

Whose gas to shut off?

After the gas was shut off:

The houses without gas would rapidly lose heat and quickly become unlivable.

Anyone who had any kind of electric space heater would plug it in.

That would blow the electric grid.

The electric grid in areas well beyond the gas shutoff area probably would be blown also.

Widespread blackouts would impact not only shut off gas customers.  It would kill the electric blowers in furnaces that could still get gas.  How many?  No way of knowing.

Lots and lots of people are in the cold and in the dark.

Many would probably get in their cars for heat and try to drive somewhere, although in reality there is nowhere for that many people to go.

Since the blackouts killed the electric gasoline pumps, filling your tank would be impossible.

As cars ran out of gas, abandoned cars would block traffic and create massive traffic jams, possibly for days.

In the end, it was only luck that the gamble paid off:

The decision was made to just let the gas system pressure drop and hope it would stay high enough to get by.  If it didn’t, a few blown up neighborhoods would be less damage than a gas shutoff.

Luck saved them.  An unexpected break in the weather lowering demand, along with some unexpected supplies, saved the city.

If you aren’t properly scared, all this relates to the short-term deaths.  Longer-term deaths from a gas shutoff were incalculable.

Hughes goes on to explain that shutting off the gas en masse can take as long to reboot as a blackstart. Frozen houses get burst pipes, basements flood, things ice over, then every furnace and gas line needs to be individually cleaned and inspected…

Wind power did this to Texas.  Be very afraid of the Green New Deal.

Read it all at American Thinker.

PS: Hanrahan sent in an excellent long comment from an Engineer in Texas. I would like to post that, but am hoping to find out if we can get permission, or if it is published elsewhere. I’m hoping Hanrahan will check his email, or perhaps someone else has seen a forum with perhaps “Goatboy” and these words: “ I’ve been an engineer in the Fossil Power Generation industry for over a decade. I am based in Texas, but have worked at plants around the US and even around the globe. I literally know these plants inside and out. ” He mentions AEP Turk. And AEP Walsh and “Sickening Schadenfreude”.

PPS: While the media has roasted Ted Cruz for leaving the state during the crisis, they are praising Joe Biden for not turning up.

On Sunday, the Washington Post enthusiastically relayed that the White House’s pronouncement that Biden is “eager” to visit Texas and might even go there this week. According to the WaPo, Biden’s hands-off approach is a virtue:

Biden is taking a notably low-key approach to the storm relief process. It’s a marked contrast to predecessor Donald Trump’s habit of making himself the often-hostile center of attention during natural disasters.