Hypothetically, if someone were trying to divide a nation this survey is Paydirt

It’s almost like a team is winding up the young and impressionable, stoking their fears. Republican Voters worry about policies, but Democratic voters are just scared of Republicans.

h/t David for the “school of fish”.

Look at the top four concerns:

According to Kristen Soltis Anderson, the cofounder of Echelon Insights, Democrat voters are more concerned about “Donald Trump’s supporters” than anything else. 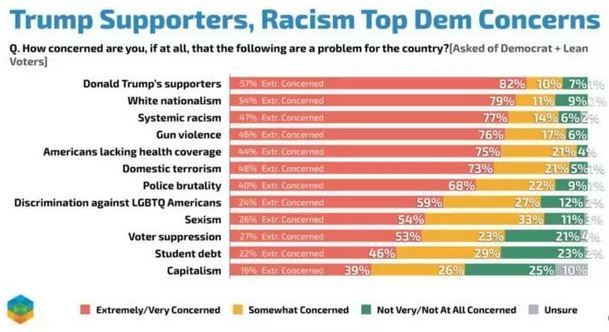 Democrats are less concerned about policy issues than they are about people with whom they disagree politically. To them, Trump supporters are more dangerous than Islamic terrorists, a more pressing issue than gun violence, and even more important than issues that affect their various constituencies, like discrimination against LGBT Americans, sexism, student debt, alleged voter suppression, etc.

To these voters, Trump supporters are a bigger issue than all of those and more. Imagine being a store owner minding your own business and thinking that the Democrat voters around you think you are a bigger issue facing this country than anything else, even more than the issues that directly affect their own families.

Who runs the national conversation — the media, the tech giants. Who controls the fish? No one and everyone. They are just following the cues fed to them every day on TV and Facebook. Once the ripples of hate start, they are amplified by “Friends.”

Meanwhile the GOP worry about foreigners, taxes, and media bias

What don’t you see on the chart? “Joe Biden’s supporters.” And why not? Because Republican voters clearly care more about real issues. Democrats, on the other hand, are still obsessed with Donald Trump and the people who voted for him. They would rather whine about Trump than actually solve the problems facing this nation. That’s why Democrats went through not one, but two bogus impeachments. 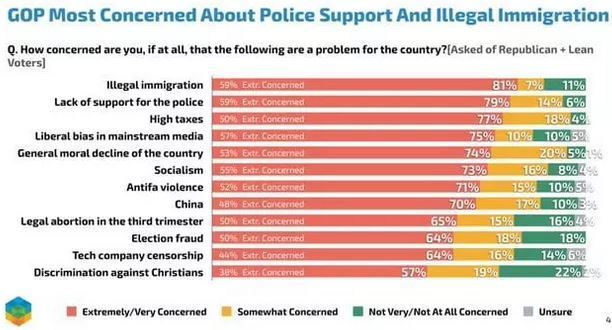 If someone were fomenting fear the last thing they’d want is a healthy national conversation.