Don’t look now, it’s a climate disaster of massive proportions and it has nothing to do with CO2.

Scientists have just discovered what they say was a wild era 42,000 years ago — where the Earth’s magnetic field practically disappeared. They’ve called it the Adams Event (after Douglas Adams of Hitchhikers Guide fame).

This was hidden previously, just before the Laschamp Excursion which we’ve known about since 1969. That event happened about 41,000 years ago – during which the Earth’s magnetic field briefly flipped. It was a pretty big deal in itself. For 800 years the field strength fell to 28% of it’s current strength and was reversed North-to-south.  Due to the weak magnetic field, the theory is that cosmic rays zinged further into the atmosphere and created a layer of enriched beryllium 10 and carbon 14 which remains to this day in a thin slice around the world buried under all the layers of dirt that came after it. 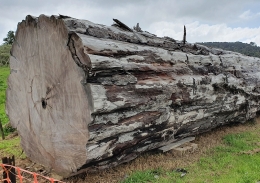 Extraordinarily, during all this, one giant Kauri tree managed to live for more than 1,700 years. It grew in New Zealand, and people got quite excited to find this log in 2019. They have now published a paper on it. (Yes, we are talking about tree rings from 40,000 years ago, and by teams that don’t want to talk much about cosmic rays in the modern era. )

What’s more exciting than a flipped field?  It’s having almost no field at all.

As far as the climate goes, if they are correct, this would have been a very tough and wild era. Around 42,000 years ago — in the lead up to the flip, they estimate the magnetic field was so weak it was at barely 0 – 6 % of current strength. Earth’s shield would have been down, gone, and the ultraviolet light and cosmic radiation was flooding in. Presumably, the ozone layer and jet streams, cloud cover, it all changes.

This is assuming that the dating is right and the layers mean what they think (and there are plenty of reasons to be skeptical). Anthony Watts asked Willie Soon, who is dubious. Cooper et al are talking about modeling some of these aspects (which I am ignoring). Even if their assumptions on the ozone layer are wrong, if the magnetic field dropped, it would be hard to believe that this would not change all kinds of events — like ocean cycles, cloud cover, and the sea surface temperature.

The real point of this paper that interests me and should not be lost under the personalities or junk modeling, is the Be10 and C14. Was there a point when Earths Magnetic field fell? If so, when and what flowed from that?

Somehow our ancestors survived this. Though the Neanderthals and some other species may not have. Indeed, a magnetic flip or fail, would be a decent candidate for the Neanderthal extinction. It was thought that the last of Neanderthals may have lived until 35,000 or even 28,000 years ago on the Iberian Peninsula, but better data suggests it really did all end “around 40,000” years ago. In which case, the timing coincides with what must have been a dreadful time to live — an ice age, plus magnetic shocks.

Prof Chris Turney describes a bad era (this is the climate scientist who was once stuck on a cruise-in-thick-Antarctic-ice). [Update: Though let’s not let personalities cloud what we might find in the data.]

Ancient relic points to a turning point in Earth’s history 42,000 years ago

Even though a GSM means less activity on the Sun’s surface, the weakening of its magnetic field can mean more space weather – like solar flares and galactic cosmic rays – could head Earth’s way.

“The ionised air ‘fried’ the Ozone layer, triggering a ripple of climate change across the globe.”

There would have been auroras all over the Earth, and many lightning storms.

Dazzling light shows would have been frequent in the sky during the Adams Event.

Aurora borealis and aurora australis, also known as the northern and southern lights, are caused by solar winds hitting the Earth’s atmosphere.

Usually confined to the polar northern and southern parts of the globe, the colourful sights would have been widespread during the breakdown of Earth’s magnetic field.

“Early humans around the world would have seen amazing auroras, shimmering veils and sheets across the sky,” says Prof. Cooper.

Ionised air – which is a great conductor for electricity – would have also increased the frequency of electrical storms.

“It must have seemed like the end of days,” says Prof. Cooper.

It may have caused many extinctions and changes in human behaviour

It’s a leap into pure speculation, but hey:

The researchers theorise that the dramatic environmental changes may have caused early humans to seek more shelter. This could explain the sudden appearance of cave art around the world roughly 42,000 years ago.

“We think that the sharp increases in UV levels, particularly during solar flares, would suddenly make caves very valuable shelters,” says Prof. Cooper. “The common cave art motif of red ochre handprints may signal it was being used as sunscreen, a technique still used today by some groups.

“The amazing images created in the caves during this time have been preserved, while other art out in open areas has since eroded, making it appear that art suddenly starts 42,000 years ago.”

If human art did leap 42.000 years ago, I think there would have been a bit more to it, than time indoors. If times were so tough, there would also have been a major genetic bottleneck, similar to the one circa 70,000 BC when the volcano Toba exploded and nearly wiped humans off the planet.

The Earth’s magnetic field does seem to be wandering around |  Courtesy of John Hillhouse, USGS

The whole 1.5 degrees of apocalyptic warming won’t seem quite so apocalyptic if Earth’s magnetic field shrinks. We might miss our satellites and electric power grids…

While the magnetic poles often wander, some scientists are concerned about the current rapid movement of the north magnetic pole across the Northern Hemisphere.

“This speed – alongside the weakening of Earth’s magnetic field by around nine per cent in the past 170 years – could indicate an upcoming reversal,” says Prof. Cooper.

“If a similar event happened today, the consequences would be huge for modern society. Incoming cosmic radiation would destroy our electric power grids and satellite networks.”

What does this mean for the current climate scare machine? It means lame excuses.

Prof. Turney says the human-induced climate crisis is catastrophic enough without throwing major solar changes or a pole reversal in the mix.

“Our atmosphere is already filled with carbon at levels never seen by humanity before,” he says. “A magnetic pole reversal or extreme change in Sun activity would be unprecedented climate change accelerants.

“We urgently need to get carbon emissions down before such a random event happens again.”

So if Earth’s magnetic shield is about to collapse don’t build underground bunker-cities inside Faraday cages — get cracking installing solar panels as fast as you can.

It will be interesting to see what becomes of this paper and the Adams Event in the wash… In the meantime, it’s a spectator sport to watch how the Apocalypse Science absorbs some conflicts of catastrophe.

UPDATE: There are criticisms that not all extinctions are occurring at 40K years ago as stated in the paper. This would be the weakest part of the claims of environmental catastrophe.

Also: The lead author Alan Cooper got sacked recently for allegations that he bullied staff. He denies it. Skeptics ought be aware but also wary that this necessarily means much in a debate about data and observations. Ad homs are still ad homs.