On January 6th Pence showed his real colours. All Trump and Guiliani were asking for was a ten day delay so that the evidence could the audited and the states might have another chance to uncertify one of their sets of dual electors. The people’s real choice remains locked away in ballots and voting machines that observers were blocked from seeing and no one has been allowed to fully audit in the last two months. Pence could have chosen that option. If he was on Trump’s side, he would have told Trump what he would do in advance, instead of leaving Trump to “hope” the day before. As Patrick Byrne said “Pence… Not going to do anything, but in a way that he hopes makes him viable in 2024. Boy, is the joke on him.”

Patrick Byrne summed up the moment:  Do not go violent. We must maintain the moral high ground. … I condem all violence in DC tonight. That’s not us and it is how we lose.

President Trump has been HORRIBLY served by his advisors and remains so.

Last night we watched election data flow real-time from Georgia to Islamabad and China. They take a blank ballot, check live voter rolls overseas, pick one to attribute the vote to, and accept it.

Unlike Biden and Harris, Donald Trump immediately denounced the violence in Washington DC and called for peace. So Twitter promptly blocked him for 12 hours. That’s long enough for the legacy media to paint him as a dangerous threat, and to twist the arm of world leaders to denounce “something”.

Donald J. Trump:  I am asking for everyone at the U.S. Capitol to remain peaceful. No violence! Remember, WE are the Party of Law & Order – respect the Law and our great men and women in Blue. Thank you!

During a Constitutional Crisis, The President is being censored.

Real Mark Latham:  “So unelected tech-nerds in Silicon Valley now have more power than the elected President of the United States, in openly censoring Trump. How hollow does all the ‘protecting our democracy’ talk sound now?”

Graham Young: Twitter: We demand you call on your supporters to go home, but we won’t allow you to broadcast it on our platform. Obviously not a neutral public square.

Appallingly, a woman, Ashli Babbitt, was shot dead by police. She was a 14 year Air Force Veteran and was described as being “unarmed”. Three others have died in the chaos, though their deaths are being described as “medical emergencies”.

Jack Posobiec: Can’t remember anyone calling for the anti-Kavanaugh protesters to be shot when they stormed the Capitol and hundreds were arrested. Thank God!

Greg Kelly : Wow. Last summer they RIOTED AND PULLED DOWN STATUES in front off the WHITE HOUSE and they put it in a NIKE commercial and OBAMA said how “proud” he was. Today—we have people WALKING abound a building (the Capitol) and and the media are call it CHAOS. 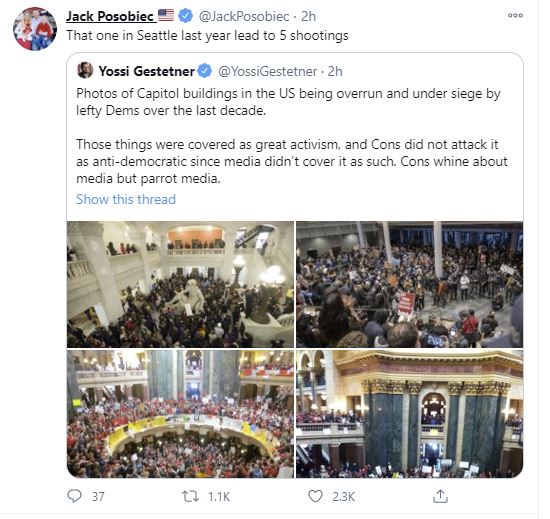 Was this caused by a few bad eggs, or was it deliberate sabotage and a false flag event? It’s impossible to say at the moment, but in the past Antifa has instructed members to disguise themselves and create havoc. It’s a known pattern, and an obvious way to damage the President. Which legacy media journalist is even investigating that possibility?

@SidneyPowell:This is a tragic day for the Rule of Law and the #Republic If this isn’t corrected quickly, it will be the greatest failure in American history It’s already an affront to all who sacrificed everywhere for our freedom & to protect our Constitution It is wrong.  …  It was a set up. 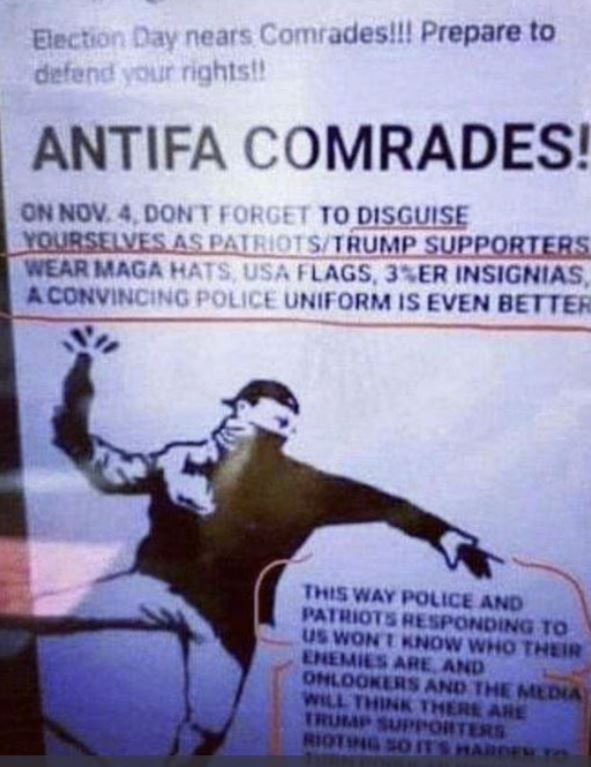 Antifa calling for disguise and violence for November 4th.

There are also claims that the man with horns was photographed at a BLM event. Is this the same man? The tattoos appear identical. He is supposedly Jake Angeli, “well known” QAnon guy and being called a “Trump supporter”. Though merely attending a BLM event does not make him a BLM supporter. UPDATE: I hear but cant confirm that the sign he was holding showed he was not supporting the BLM. 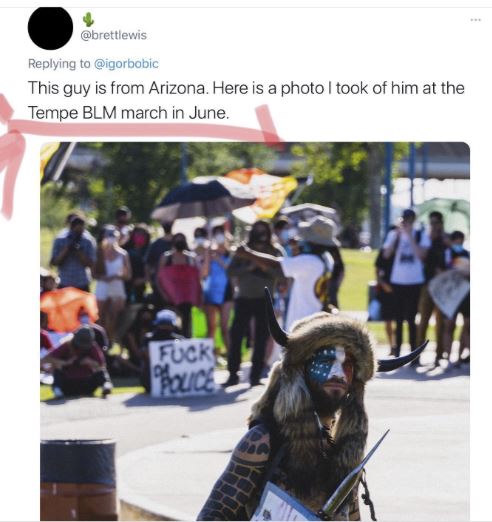 Man in hood with horns seen at BLM rally

Jon Rapport asks if this was a successful false flag event:

He points out how useful it would be to the anti-Trump crew:

I’ve read and seen reports of Antifa members (from Philadelphia and Tempe) being inside the Capitol building. A close-up photo of one of the protestor’s wrists shows a hammer and sickle tattoo. There is a claim that Antifa members were bused into DC a day before the rally.

Obviously, if the assault on the Capitol building was a false flag, all the blame cascading down on Trumpers paves the way for Biden and his handlers to carry out even more draconian measures on the American people, under the rubric of National Security—piled on top of the COVID lockdowns.

To be effective collective media amnesia is needed. Who remembers all the violent Antifa protests, storming of government offices, and that Biden and Harris did so little (nothing?) to stop that:

For the next 20 years, media will play up Wednesday, January 6, 2021, as the dark day America almost broke apart. You can bet a few dozen production companies are already editing footage for “stunning, award-winning” documentaries.

Democrats are feeling a burst of confidence that Trump’s career as a politician is over—since he will forever be linked to “The Insurrection of January 6.”

In their eyes, this is far better than a physical assassination.

On the night of February 27, 1933, a fire was set in the German Reichstag, the national parliament. It burned a significant portion of the structure. Many historians state Hitler’s people set that fire—which at the time was successfully blamed on his main political opponent, the Communist Party. The tactic allowed Hitler to consolidate his final needed piece of national power.

Alongside the endorsement and support of IG Farben, the biggest pharmaceutical and chemical cartel in the world, the Reichstag false flag gave Hitler control over the fate of Germany.