Not acting like a team that won Eighty Million votes

Democrats have fed division so well they now don’t trust the National Guard. 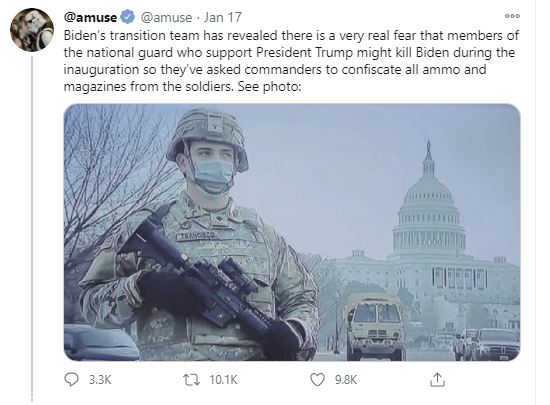 WASHINGTON (AP) — U.S. defense officials say they are worried about an insider attack or other threat from service members involved in securing President-elect Joe Biden’s inauguration, prompting the FBI to vet all of the 25,000 National Guard troops coming into Washington for the event.

The massive undertaking reflects the extraordinary security concerns that have gripped Washington following the deadly Jan. 6 insurrection at the U.S. Capitol by pro-Trump rioters. And it underscores fears that some of the very people assigned to protect the city over the next several days could present a threat to the incoming president and other VIPs in attendance.

According to @amuse, the Biden transition team have confiscated their ammo, and wanted to ask who the Guard voted for. The insulting request was refused initially, though eventually, sadly, the Army acquiesced.

”We’re continually going through the process, and taking second, third looks at every one of the individuals assigned to this operation,” McCarthy said in an interview after he and other military leaders went through an exhaustive, three-hour security drill in preparation for Wednesday’s inauguration. He said Guard members are also getting training on how to identify potential insider threats.

The FBI got involved. @amuse says “Any soldiers who believe there was election fraud are being referred for disciplinary action and removed from the Capitol.” Sounds dreadful.

It’s all Trumps fault of course. If only he hadn’t been so popular, all that cheating wouldn’t have been necessary:

In contrast, the threats against Biden’s inauguration have been fueled by supporters of President Donald Trump, far-right militants, white supremacists and other radical groups. Many believe Trump’s baseless accusations that the election was stolen from him, a claim that has been refuted by many courts, the Justice Department and Republican officials in key battleground states.

The Democrats get to play the Victim card on the national spotlight, they add more loaded questions. And perhaps this horrible “vetting”  process has a side  “benefit”? It might work like the CCP brainwashing techniques. Getting guards to publicly state who they voted for (or lie about it) might work. If people do it often enough they might start to believe they really did vote for Biden and that the claims of voter fraud were “baseless”.

But even if that doesn’t work, many members of the National Guard will be that much warier next week to say who they voted for.

Welcome to the world of Democrat Healing.