The Capitol Hill Police Force has 2,300 officers and a budget of $460 million, it’s bigger than the entire Atlanta Police force, yet Jake Angeli, or “Buffalo man” made it all the way into the Senate Chamber with a full metal spear “disguised” as a flag staff with just a cable tie.

And they even had three days warning.

The whole force answers to Nancy Pelosi. If the storming of Capitol Hill was “a coup” in progress, Pelosi’s leadership was an incompetent failure. But if the storming was a Publicity stunt, allowing Mr Spear-n-Horns in to star in front page spreads was a success. 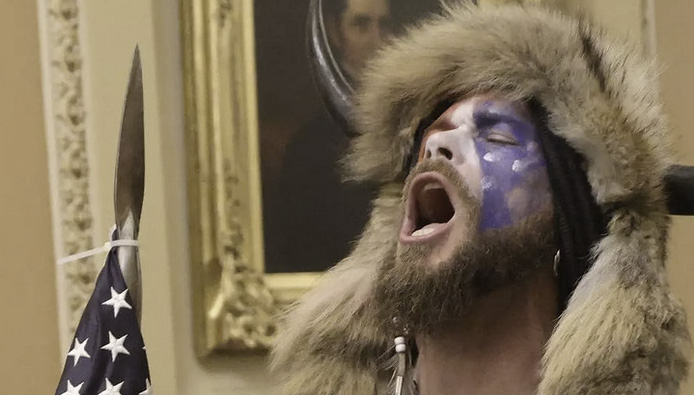 Jake Angeli, the Buffalo man, in Congress with horns and a Spear

The Capitol Hill Riot Was Pelosi’s Fault, Not Trump’s

The media has constructed a false narrative in which the White House overreacted to BLM and underreacted to the Capitol riot. But it wasn’t the White House’s job to protect Congress. That’s why Congress has a force of 2,300 people and a $460 million budget with just one job to do.

The question of why it failed at that job ought to be directed to Pelosi and congressional leaders.

The Capitol riot is Pelosi’s disaster and she’s making the most of it by blaming it on everyone else. Her private police force had the resources and the people to keep out the Visigoths, never mind a few hundred people, and instead turned what should have been a riot into a disaster.

Congress’ private cops are the 19th largest police force in the country. It’s a larger force than the police forces of Atlanta, Baltimore, Denver, or Milwaukee with a massive $460 million budget.

While Democrats advocated defunding the police, their private police force budget shot up from $375 million in 2016 to $460 million in 2020. After the Capitol Hill riot, expect it to go higher.