We’re in an Information War. What the collectivists want is for fans of Trump to watch their filtered news, feel demoralized, and surrender to the new order. What they are most afraid of, are 70 million Trump fans getting organised, and turning up in the streets with their red MAGA hats on.

There are rallies in many other states as well. See StopTheSteal for details. 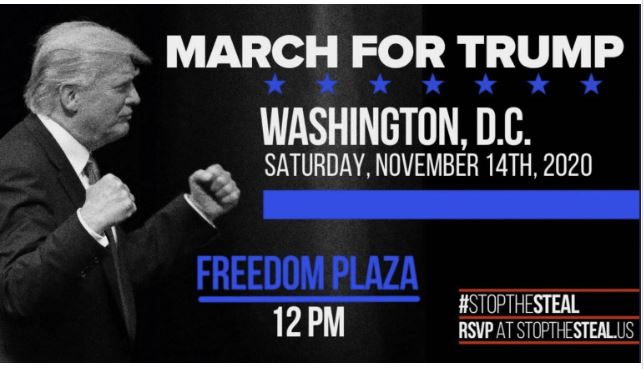 Imagine the effect if the major news outlets were letting people know this was coming?

The Right urgently needs to shore up new communication lines.  Sign yourself up to newsletters and lists. Join Parler and Gab. Check Bitchute. Share emails with friends. And do wear the MAGA hat if it’s safe to do so. In some places it’s already too risky to wear the hat — but it wouldn’t be, if lots of people wore them.  The anti-dote to censorship and  suppression is

Whatever you do, don’t wait to hear about up and coming rallies through your local media. They’re too busy cheering that China, the EU and the UN are looking forward to friendlier deals with Joe Biden. They would, wouldn’t they? That’s their admission that Trump won harder deals out of them.