Giving up on science, the UN is competing openly now to be The Big Religion. The Rapture is next?

“The future of mankind looks very bleak” says the Earth’s Medicine Man. We can save you. Give us your money, your children, and your frequent flyer miles.  Follow their plan, they can stop Fire! Flood! Earthquake! Storm! Tsunami! Your car causes tsunamis. Who knew?

The UN claims there’s been a staggering rise in extreme events in the last 20 years. Instead, the only staggering rise are the brazen errors in UN reports. As Roger Pielke and the GWPF say: The UN have a graph in their own report, Figure 5 page 10, showing that climate related disasters have declined by 15% in the last 20 years. As CO2 increases — the world becomes a safer place. :- ) Obviously the UN couldn’t use that to generate apocalyptic headlines. Better to compare it to the 20 years before. Inflation is your friend! 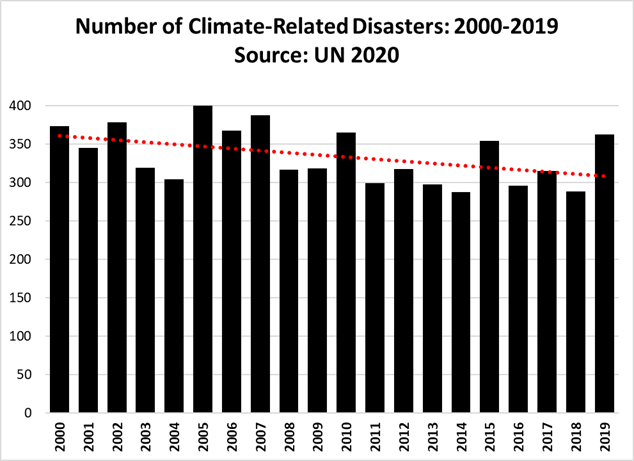 Benny Pieser says: It’s a shambles; a catalogue of errors”. “The UN should withdraw the report immediately and apologise for misleading the public in this way”. He is far too kind. The UN should be disbanded. There is no saving it.

As Pielke reminds us: The UN uses EMDAT which is not data about the climate but about human impacts.

Frozen out of International Headlines by a Chinese virus, the UN has gone full pagan witchery —  to try to steal ten seconds of airtime in the lead up to the US election.

The UN-committee-of-doom compared death rates and dollar losses from the last twenty years to the twenty before that, because, yeah, world population has stayed the same, and the rise of mobile phones and The Internet did not make disaster reporting a professional hobby. Everyone, even tiny children, knew what a study like that would show.

So many people died, perhaps “more than once”:

…there were 7,348 recorded disaster events worldwide, during the last two decades. Approximately 1.23 million people died – approximately 60,000 per year – with more than four billion affected in total; many more than once.

The UN team know exactly what they are doing:

Although better recording and reporting of disasters may help explain some of the increase in the last two decades, researchers insisted that the significant rise in climate-related emergencies was the main reason for the spike, with floods accounting for more than 40 per cent of disasters – affecting 1.65 billion people – storms 28 per cent, earthquakes (eight per cent) and extreme temperatures (six per cent).

Plus today we find out Russia, China, Saudi Arabia join the human rights council of the UN. As Malcolm Roberts says “FLICK the UN”.

UN Hellfire Report or Words To That Effect [PDF]