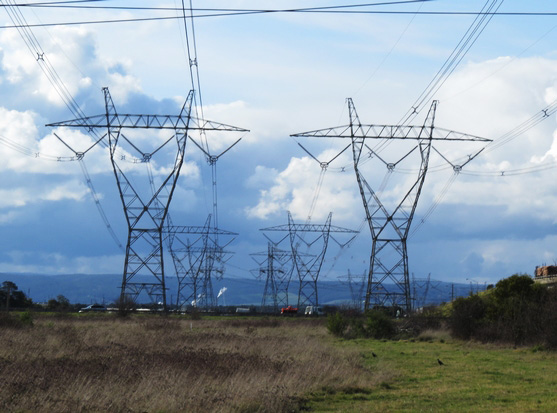 The totally non-essential new interconnector between NSW and SA will now cost nearly a billion more than was expected. It will add no new baseload generation but allow the random energy surges from South Australia to interfere with New South Wales supply. Surges of subsidized energy will break the balance sheets of cheap baseload infrastructure in NSW, making them less profitable, and driving them out of business unless they charge more for the fewer hours they operate. Both states will spend more on electricity but be less self sufficient, and more dependent on other states.

Why aren’t NSW generators complaining? Because they know prices will rise, not fall. Ask AGL — the more coal plants it can close, the more profits it can make from the gas and unreliable generators.

The extra interconnector won’t solve the real issues — it “probably” won’t change the massive high pressure weather systems that stop wind towers working in both states simultaneously. The magical transmission lines “probably” won’t stop the sun setting in Adelaide one hour after it sets in Sydney either. But it will make some property developers rich.

The $2,400 million dollars won’t fix the real problem which is that low density energy sources are inefficient and intermittent, and productivity gains from the generation of green electrons are zero, or less. It’s just physics.

But that kind of money would pay for a lot of HELE Coal power. A gift for generations to come.

He was concerned the interconnector would force SA’s gas-fired generators to close, losing the state’s capability to power itself.

The death of the entire Australian Aluminium Smelting industry is a mere sideline in the modeling:

The economic comprehension of electricity markets is childlike:

If only electrons were bananas, it might be true. But the last decade in Australia shows that electrons are not priced like tropical fruit. In the last ten years Australian demand for electricity has declined while renewable generation has been added like fairy floss, but prices went wildly up, not down.

The modeling will deliver whatever the modeler wants.

As usual, the Labor Party gets it exactly backwards.

In a Budget reply speech on Thursday night, Federal Opposition Leader Anthony Albanese said if the ALP was elected it would invest $20bn on creating a Rewiring the Nation Corporation which would build national transmission lines.

“As more renewable energy gets built, we need the transmission network to support it,” Mr Butler said.

To which, Jo Nova says: We don’t need the transmission lines at all. The renewables industry needs them.

When will the Labor Party start acting like they serve the people instead of the Renewables Industry? When will the ABC?

When will the Liberal Party grow a backbone and say the obvious?