Spring snow has fallen in Ballarat and even parts of mid north South Australia, and regional NSW.

Unlike warm spells which are caused by air conditioners and SUV’s, cold spells are due to “polar air masses” that evidently got lost on the way to school or something.

Someone was reported Skiing in mid north South Australia. The normal ski season here was winding down, normally closing in early October, and that’s in the Alps.

In the many posts under #Snow, Australians are reported to be confused, mistaking white stuff for blossoms and other things.  One Australian cried at seeing her first snow. Others just wonder what it is:

“Whyte Yarcowie resident Judy Lewis said she initially could not believe what she was seeing when she noticed a white blanket over her car and front yard.

“I got up to make a coffee and I looked out and I thought, ‘What’s all that white on the car?'” she said.” 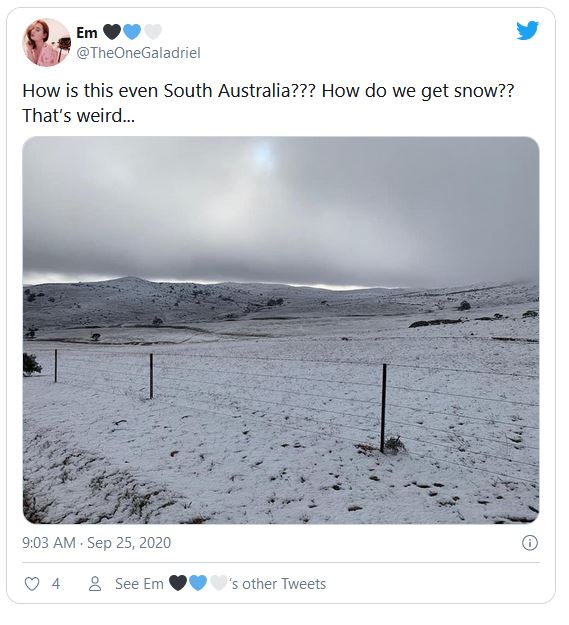 Snow in Australia in places that almost never get snow.

Spring snow has blanketed parts of regional South Australia — with falls in the state’s Mid North thick enough for some to start skiing — amid an unusually cold snap at the end of September.

Snow fell at altitudes as low as 200m above sea level in Victoria.

Victorians have been left shivering by an Antarctic blast that swept across the state, bringing significant snowfalls and the coldest September day in more than half a century to the regional city of Ballarat.

Nicole Lewer had lived in Lismore for more than a decade and had also never seen so much snow.

“I thought someone was losing their blossoms in the wind, and on closer inspection it was snow,” she said.

The Bureau of Meteorology said Ballarat recorded its coldest September day since 1969.

Have you seen snow or hail in your area this morning?❄️
Jodie woke us this morning to find this magical winter wonderland in her backyard in Canowie Belt in the Mid North of South Australia.