They told us if we stopped driving our cars that global CO2 levels would fall. But after 6 months of the most draconian low carbon diet ever, Cape Grimm Tasmania is still measuring a normal rise in CO2 levels.

Here’s the wild absurdity — Covid restrictions are expected to cut human emissions by 4 – 7% but to reach the Paris Target, we “need” exactly that kind of reduction every single year for the next ten years.

Carbon dioxide levels over Australia rose even after COVID-19 forced global emissions down. Here’s why

…our measurements show more CO₂ accumulated in the atmosphere between January and July 2020 than during the same period in 2017 or 2018.

Look at the graph (below) of CO2 levels rising on their annual cycle each year.

There was a huge reduction from 2016 to 2017. It’s almost like China built lots of coal power plants, then disassembled them. That, or perhaps CO2 levels are controlled by plankton and have nothing much to do with human activity. 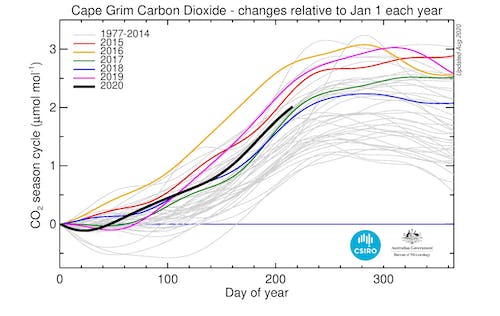 It’s clear COVID-19 has not solved the climate change problem. But this fact helps us understand the magnitude of change required if we’re to stabilise the global climate system

Their excuses are entertaining — Cape Grimm doesn’t show any reduction yet because it’s a long way from the Northern Hemisphere where the biggest reductions were, and the reductions are a “drop in the ocean”.

Spot the effect of coronavirus: 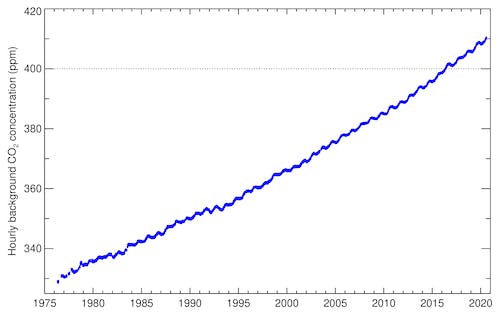 Do the emissions maths

Covid restrictions are expected to cut human emissions by 4 – 7% but the bald truth is that we need a 3 to 7% reduction every single year. And for the next ten years.

Research in May estimated that due to the COVID-19 lockdowns, global annual average emissions for 2020 would be between 4.2% and 7.5% lower than for 2019.

Let’s simplistically assume CO₂ concentration growth reduces by the same amount. There would be 0.08-0.23 ppm less CO₂ in the atmosphere by the end of 2020 than if no pandemic occurred. This variation is well within the natural 1 ppm/year annual variability in CO₂ growth.

To achieve [The Paris Target], global CO₂ emissions must decline by 3% and 7% each year, respectively, until 2030, according to the United Nations Emissions Gap Report.

Flashback to the importance of phytoplankton:

Previously Tom Quirk found a huge 2.5Gt carbon spike in 1990 (which is 9Gt of CO2) — as if three extra Chinas were suddenly emitting CO2 that year. The best explanation was that changes in wind patterns and ocean currents meant it was a bad year for phytoplankton. When phytoplankton struggle, they don’t draw down the usual CO2, hence the spike.

Another study (Martiny, 2013) found that phytoplankton might be drawing up twice as much carbon as modelers thought.  While Guidi et al 2015 looked at viruses and discovered that only 10 out of 5,000 were predictive of CO2 levels and these were viruses that infected plankton.

Humans put out only 4% of global CO2, so in terms of whether humans can outcompete cyanobacteria et al, the answer appears to be “no”.

Ocean plankton suck up twice the carbon we thought they did

The mystery of a massive 9Gt of CO2 that came and went — could it be phytoplankton?

Phytoplankton are much bigger players in CO2 levels than realized