Not only is the second peak  bigger than the first one, but it’s all community spread this time. Fully 191 new cases of Covid19 were announced in Victoria today. Ominously, only 37 so far can be traced (so far), which means this is not just about spot testing in the nine high rise towers that are now locked down. So , no indoor sport, no gyms, or concerts, museums or zoos can open. No more dining in restaurants and given the disturbing number associated with schools, the start of Term 3 has been delayed by a week for years 1 – 10, and possibly longer. But fishing, boating, golf, and surfing are OK. It’s good to see the quarantines are evolving, recognising the minimal benefit of stopping dispersed outdoor activity.

For people overseas, the Australian style of lockdown permits people to move for work if they can’t stay home, and to shop for essentials and to exercise.  Jobs are considered essential, but people are encouraged to work from home if they can.

UPDATE: There will be immense pain for businesses who only just set themselves up again, or workers who just got back to work. Hopefully we can find a way to share that burden fairly. Commiserations to all.

Victoria is testing over 20,000 people a day, and around 0.5% of all tests are positive. In comparison, in Arizona test positivity is more like 25%. 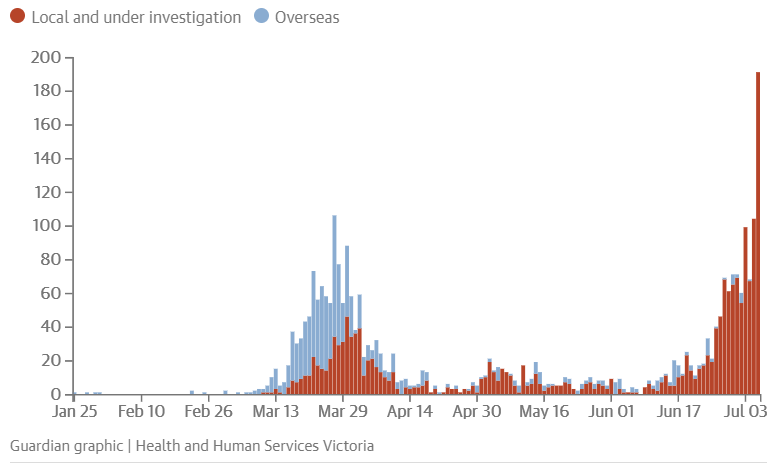 How fast the coronavirus can get out of hand. Victoria, Australia. (Click to enlarge). Graph, Guardian, Vic Health.

The Border Wars in Australia are suddenly over

Finally, borders are treated like the bargain option they should be. Both Scott Morrison and Glady Berijiklian (NSW Premier) had been demanding borders reopen all over the country, repeatedly saying there was no medical case for closing borders. That was until the Victorian outbreak suddenly grew to be larger than their own state’s last weekend, and then closed borders suddenly became very appealing.

Yesterday Dan Andrews (the Victorian Premier, in need of all the help he can get) was happy to provide cover for the hypocrisy of the other two NSW based leaders. He was the one who announced the border closure. But he’s not imposing or enforcing the state borders. NSW is.

…after a phone call between Mr Andrews, NSW Premier Gladys Berejiklian and Prime Minister Scott Morrison, …it was agreed the Victorian border with NSW would be closed as of [Tuesday] night.

“That closure will be enforced on the New South Wales side, so as not to be a drain on resources that are very much focused on fighting the virus right now across our State,” Mr Andrews said.

Mr Andrews confirmed the border closure was a “joint decision” and wouldn’t comment on who first raised it.

Closing borders should be the first and cheapest solution to stop or slow any infectious virus. Only a small part of the economy in most places depends on interstate holiday and conference travellers. Most of the economy can continue without them as long as there is no local spread and thus no local restrictions. But the freedom within the borders is only as good as the strength of “wall”. (And suddenly all the Australian leaders are nervously tightening their slightly leaky borders). Victoria is the reminder that only a strong border stands between any Australian town and this virus.

In a household lockdown the border is the fence around each house. It’s obviously (and always was) that national, state and regional borders are a bargain — no matter how expensive they are — rather than trying to do household lockdowns.

Clive Palmer (the coal mining sellout to Al Gore in 2014) is taking WA to the high court to get the state to open borders, and Scott Morrison and the Federal Government officially supported him, which looks fairly comical now.

Mark McGowan Premier of WA says: “It does not make sense for the federal government to be supporting a border closure between NSW and Victoria but on the other hand challenging Western Australia’s border in the High Court of Australia.

Only a week ago Scott Morrison was saying Queenslanders are the “biggest losers” from border closures, and was accusing Qld and SA Premiers of “lacking perspective” over their decision to close borders with Victoria.

Scott Morrison, June 18th: …they [borders] should never have been closed in the first place.

He used the magical absence-of-evidence argument. Who noticed the dodge?

“That was never the medical expert advice that was given to National Cabinet. States have gone their own way,” he said.

Hopefully Morrison will now recognise the value of borders and stop pretending there is any medical excuse not to enforce them. For months now he’s been saying we’re keeping the international borders closed due to medical advice but demanded state borders were open for the same reason.

How many international leaders will be watching this and learning?

Some US states could stop the coming trainwreck if they just copied Australia. How many people in regional USA could lead normal safe lives if the big cities were ring-fenced? Why is the US still allowing viruses to fly in and fly around when they don’t have to?

Australian state borders include at least two “twin” cities which straddle a border. In this case, while most of regional Victoria is fine and free, the twin cities of Albury Wodonga have suspect cases (NSW) and new cases (Vic). Seems like it would be wise to lock and test those two pronto.

The Victorian government made four stupid mistakes, even as it imposed the toughest lockdown regime in Australia.

First, it didn’t supervise the quarantine hotels properly. It chose to use untrained security guards without even the most elementary common sense of having them supervised by police officers, soldiers or prison guards.

Second, it made no serious effort to stop the Black Lives Matter mass demonstrations, unlike other governments.

Third, Victoria was not as energetic in contact tracing as other jurisdictions.

And fourth, a state government that prides itself on its multicultural credentials was not effective in communicating the social-distancing message to several ethnic and religious minorities whose generally perfectly innocent cultural practices were prone to spreading the virus.

As I said, the BLM rallies may or may not have spread the virus, but they blew away the community compliance with isolation and restrictions. At least the other states in Australia tried to stop the rallies. In Victoria, Andrews just fined the leaders, but everyone else knew it was fine. How much did the BLM rallies matter? We don’t know.

Shelves being cleared out in some Melbourne stores. Can’t hurt to stock up wherever you are.

For the record, two weeks ago I started restocking supplies even though there is no community spread here in WA. It’s better to keep the back ups, just in case. If bad news comes, we won’t contribute to the rush. If it doesn’t, I’m buying things we’ll use anyhow.