Antibody tests versus PCR tests: PCR tests are nose or throat swabs that amplify up short fragments of viral RNA. They only detect infection in the day or two before symptoms show, and for a few days to a few weeks later. The PCR tests cannot show past infections. Antibodies take around a week or two to rise so don’t show active infections, but will show up past ones, though — in the case of Coronavirus, may still produce no result after a few months in some people as antibodies decline.

Test results like these must finally have convinced Donald Trump to change course. It’s long past time the US got serious about this disease, but hopefully rapid action now — masks and distancing and more testing can prevent the trainwreck of rapidly rising infections across the US in two months time as winter and the US election approach.

This study shows that most people in the US have not had this virus, and herd immunity is unattainable without hundreds of thousands more deaths. It also shows how inadequate testing is in the US.

Many antibody studies have tried to estimate the true extent of the Coronavirus infection. Some were ludicrously high (as I said they would be and these new results confirm), but this new study is better. Blood tests (called serology tests) can detect antibodies from past infections but few of the past studies were randomized which means they were doomed to wildly overestimate the rate of infection due to their selection bias. Infected people are much more likely to volunteer to get tested, and uninfected people are much less likely to roam to shopping centres or respond to ads to get tested. This study tested 16,000 people, and used leftovers of blood at large commercial pathology laboratories. In other words, these were people who got blood tests done for some other reason. Not randomized, still biased, but much better than past efforts.

The serum was collected from March 23 through May 12, so biased low in that they don’t contain infections from the latest outbreaks. But it was also biased high because people getting blood tests done are still more likely to be infected people turning up to get blood tests. The peak of NY infections was April 4, so the testing here relates to the week before that NY peak. Thus infections may have been easily twice as high in NY. But — healthy people were also much more likely to be avoiding routine blood tests during the peak week of the pandemic. So double it, halve it, chuck in a guesstimate. All we know for sure is that the 7% result here is not 25% which might have indicated NY was on its way to herd immunity. Cuomo is right to try to close the borders. There are still too many people at risk in NY.

Assuming that the low scorers here (like Florida) may now be up at NY levels, they still need five to ten times the infections to slow the spread. And we are still not sure if people can re-catch Covid a year later. 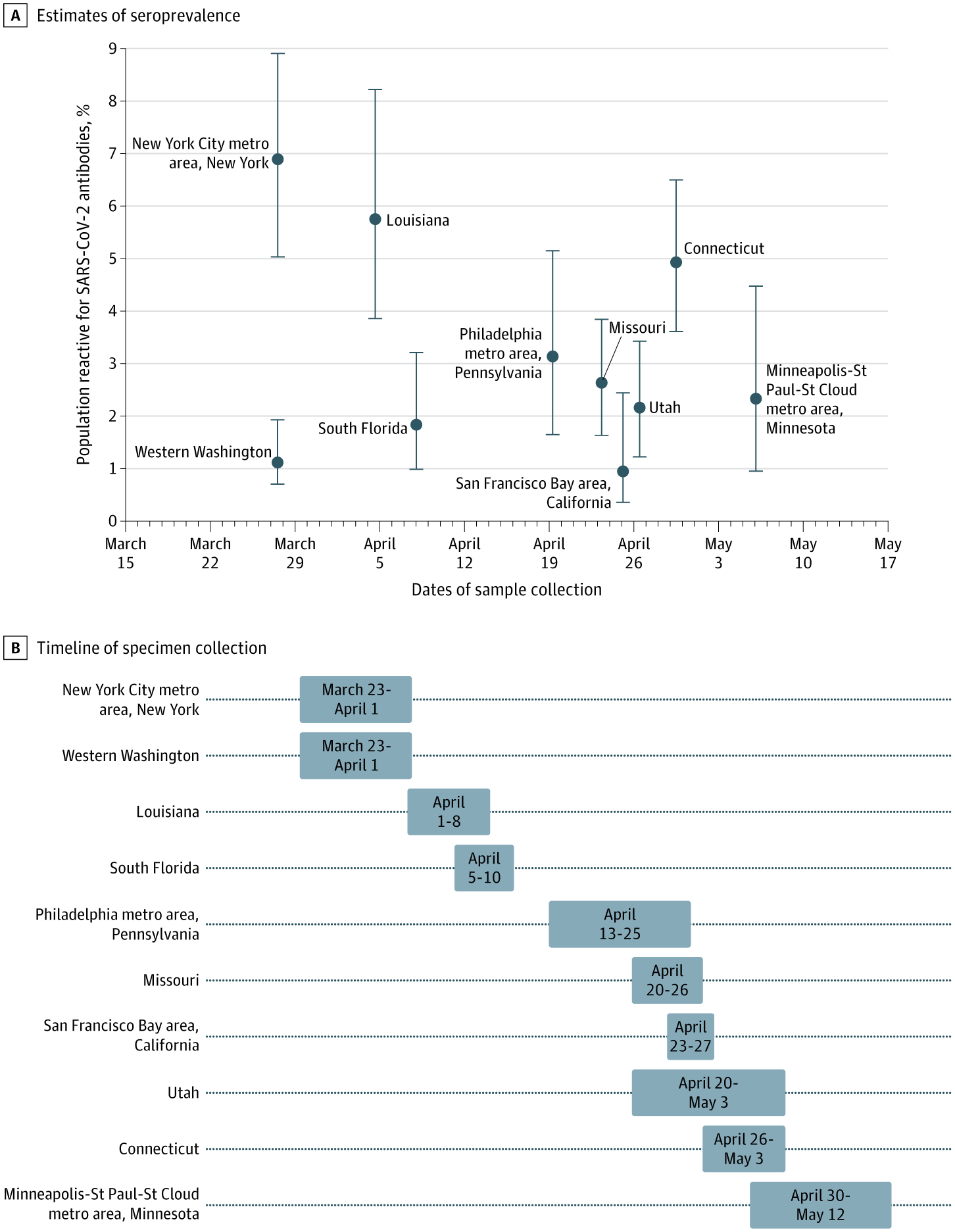 Where Australian “test positivity” is in the range of 0.5% of all tests, the range in the US is often 10 – 25%. The authors estimate the US would need to do 4 million tests every day to get a grip on this infection. Current testing is around 800,000 a day.  So they need to test five times as many people to be sure they are picking up most infections.

No useful info here on “asymptomatic”

The authors claim this shows most infections are asymptomatic, but given that data on symptoms is not even collected, this is not remotely reliable. Much better studies for that use PCR tests and follow up patients for 2 weeks in real time to see if symptoms develop. People in this test who had a bad case of Covid, but didn’t get a Covid swab done and didn’t end up in hospital could still end up falling in their “asymptomatic” category. Silly.

They allowed a 7 day lag when comparing PCR test results in an area to the antibody results.  The blood samples are biased towards older people, sick people and people with co-morbidities. They do correct for the age bias and standardize results accordingly, but can’t correct for the “sick people” bias.

Seroprevalence of SARS-CoV-2 infection varied across the country in the early spring, ranging from an estimated 1% in San Francisco to almost 7% in New York City, CDC researchers found in an ongoing study.

A serosurvey of around 16,000 people in 10 diverse sites across the U.S. estimated a range of 6 to 24 times more infections than reported cases of COVID-19 based on antibodies to SARS-CoV-2 spike protein, indicating asymptomatic spread may have played a significant role in transmission, reported Fiona Havers, MD, of the CDC, and colleagues.
Indeed, in a letter published Tuesday in the New England Journal of the Medicine, researchers at the University of California Los Angeles reported serology results from 34 patients with previous, mostly mild COVID-19. They found that antibody titers waned substantially over 90 days, with a mean half-life of 73 days.

Havers and colleagues performed a cross-sectional study on serum samples from around 16,000 people collected for routine assays at two commercial laboratories, during staggered times from March 23 to May 12. Samples were from 10 areas: the New York City region, western Washington state, metropolitan Philadelphia, Minneapolis, south Florida, the San Francisco Bay area, and the states of Louisiana, Missouri, and Utah.

While the seroprevalence was dramatically higher than the number of reported cases in all 10 areas, the gap between the two estimates varied: the smallest was in Connecticut (176,012 infections vs 29,287 cases) and largest in Missouri (161,936 infections vs 6,794 cases).