Do the BOM even care about Australia’s climate? 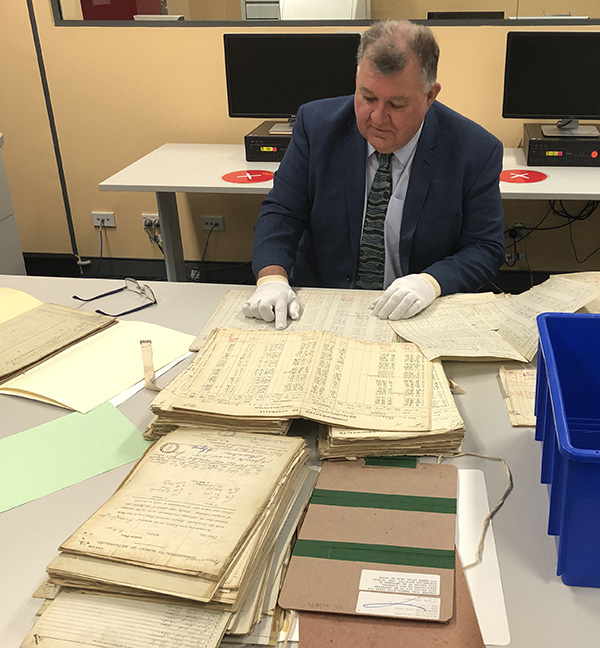 The hottest day ever recorded in Australia with modern official equipment was Jan 3rd, 1909 in Bourke where the temperature blistered at 51.7C (125F).

Yesterday the Honorable Craig Kelly MP trawled through historic archives looking for temperature records from a century ago to see if he could confirm that it really was 125F in Bourke that day, and whether it was almost that hot in Brewarrina too.  Craig Kelly wants the record restored.

The site at Bourke is one of the oldest in Australia, starting in 1871. It’s also very influential because it was used to estimate the temperatures of vast remote areas around it. By 1909 there was already nearly 40 years of data at Bourke, and the Stevenson Screen had just been replaced so it was almost brand new. There was no airport tarmac either, so in 1909 the site was probably better than most modern sites are today. But the 1909 “hottest ever record” was deleted after an investigation in 1997 by Blair Trewin.  It was written off as an error partly because it was recorded on a Sunday and the observer wasn’t normally at work. Supposedly a dedicated weather nerd wouldn’t pop in on a day off just because it was the hottest day of his lifetime. (Not when there were so many other exciting things to do in Bourke in 1909.)

Trewin argued that other surrrounding towns of Thargominda, Walgett and Coonamble were nearly 7 degrees C cooler than Bourke. But Brewarrina is closer and newspaper reports had the temperature there on that Sunday as 123F.  But the BOM didn’t have official records for Brewarrina til 1911. So Craig Kelly took it up on himself to do the research the million-dollar-a-day BOM couldn’t do, and today he found the official records for Brewarrina, and lo, confirmed that the temperature there was 123F. So two different guys over 100 km apart recorded almost the same temperatures on the same day.

As we reported here in 2014, at Cobar it was 117F, in Goodooga, 123 and  it was 117 at Riverstone. h/t Chris Gillham and Lance Pidgeon.  So Brewarrina was not the only town nearby with extraordinary heat.

Despite the long history of the Bourke weather data, the good people of Bourke only hear about temperature records since the year 2000. Jennifer Marohasy found the son of one of the original weather observers in Bourke, and he’s frustrated that the careful work of his father is as good as forgotten. Mr Cole owns the local radio station but can’t broadcast the records his father observed because the BOM only supplies data to “weatherzone” from the year 2000.

The original handwritten log books were tossed in the trash and it’s only thanks to non-BOM dedication that they were rescued and saved from the dumpster.

If the day wasn’t digitized, does it exist?

Craig Kelly also uncovered the data for Whitecliffs, another town of the far outback in NSW. There in 1939 an observer recorded the second hottest Australian day (of the last 120 years) at 51.1°C (124°F).

That too is not officially acknowledged even though it was recorded in a Stevenson Screen.  And the reason, Craig Kelly tells me, is because it hasn’t been digitized yet. Figure that! The greatest crisis is coming to destroy life on Earth but the BOM can’t find time to write up our old history. They get hundreds of millions of dollars of taxpayer funds and tell us the trends and records are accurate to a tenth of a degree, but they haven’t even bothered to manually go and fish out and type in the most extreme days as reported in newspapers all over the country.

Jennifer Marohasy, Craig Kelly and I all want to know — When with the BOM correct the record?

Brewarrina is the closest town to Bourke in outback NSW.

See the hand-written raw data in the photos as written up and explained by Jennifer Marohasy.

The Australian Bureau of Meteorology deleted what was long regarded as the hottest day ever recorded in Australia – Bourke’s 125°F (51.7°C) on the 3rd January 1909. This record* was deleted, falsely claiming that this was likely some sort of ‘observational error’, as no other official weather stations recorded high temperatures on that day.

However, Craig Kelly MP has visited the Australian National Archive at Chester Hill in western Sydney to view very old meteorological observation books. It has taken Mr Kelly MP some months to track down this historical evidence. Through access to the archived book for the weather station at Brewarrina, which is the nearest official weather station to Bourke, it can now be confirmed that a temperature of 50.6°C (123°F) was recorded at Brewarrina for Sunday 3rd January 1909. This totally contradicts claims from the Australian Bureau of Meteorology that only Bourke recorded an extraordinarily hot temperature on that day. 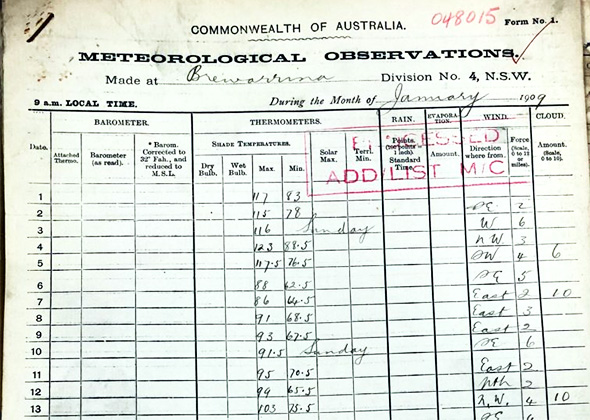 He has photographed the relevant page from the observations book, and it shows 123°F was recorded at 9am on the morning of Monday 4th January 1909 – published here for the first time. This was the highest temperature in the previous 24 hours and corroborates what must now be recognised as the hottest day ever recorded in Australia of 51.7°C (125°F) degrees at Bourke on the afternoon of Sunday 3rd January 1909. 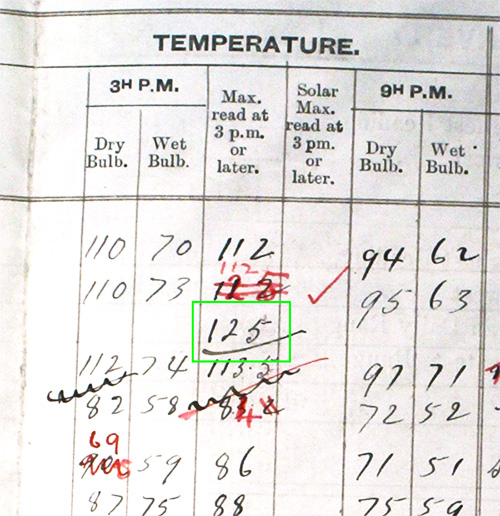 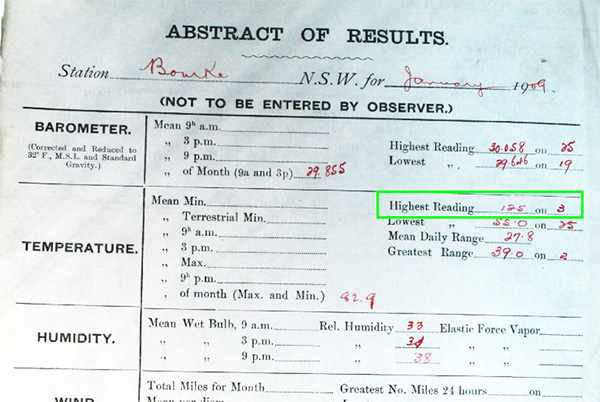 Australia’s hottest day ever was recorded at Bourke in 1909

That the Bureau of Meteorology denies these record hot days is a travesty. Is it because these records contradict their belief in catastrophic human-caused global warming?

The temperature of 50.6°C (123°F) recorded back in 1909 which is more than 100 years ago, photographed by Mr Kelly today at the National Archives in Chester Hill, is almost equivalent to the current official hottest day ever for Australia of 50.7 degrees Celsius at Oodnadatta on 2nd January 1960. These are in fact only the fourth and third hottest days recorded in Australia, respectively.

Not only has Mr Kelly MP tracked-down the meteorological observations book for Brewarrina, but over the last week he has also uncovered that 51.1°C (124°F) was recorded at White Cliffs for Wednesday 11th January 1939. This is the second hottest ever!

The evidence, a photograph from the relevant page of the White Cliff’s meteorological observations book, is published here for the first time. 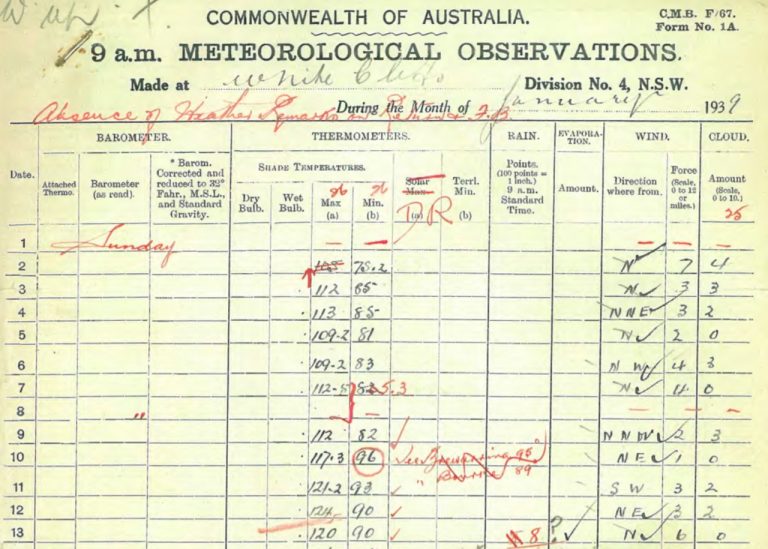 Until the efforts of Mr Kelly MP, this second hottest-ever record was hidden in undigitised archives.

It is only through the persistence of Mr Kelly to know the temperatures at all the official weather stations in the vicinity of Bourke that this and other hot days have been discovered.

If we are to be honest to our history, then the record hot day at Bourke of 51.7°C (125°F) must be re-instated, and further the very hot 50.6°C (123°F) recorded for Brewarrina on the same day must be entered into the official databases.

For these temperatures to be denied by the Bureau because they occurred in the past, before catastrophic human-caused global warming is thought to have come into effect, is absurd.

At a time in world history when Australians are raising concerns about the Chinese communist party removing books from Libraries in Hong Kong, we should be equally concerned with the Australian Bureau of Meteorology removing temperature records from our history.

If global warming is indeed the greatest moral issue of our time, then every Australian regardless of their politics and their opinion on greenhouse gases and renewable energies, must be honest to history and these truths.

The mysterious lost hot Sunday in Bourke, did it really happen?

Bourke: How 1km of land clearing can warm a million square miles