If only they had done that 3 months ago

As I predicted, borders need to close. Places that don’t close the state border end up putting a border around every single home. It’s the same all over the world. But no one seems to have noticed how spectacular this backflip is.

In March when New York was the epicentre begging for ventilators, Donald Trump suggested quarantining the tri-state area  to stop infections spreading to the rest of the US.  It was exactly the right thing to do, but Governor Cuomo was enraged — declaring the idea was “preposterous”, “anti-American” and a “declaration of war”. Cuomo even argued it would be illegal for Trump to do so, and threatened to sue:

“I’ve sued the federal government a number of times over the years. I do not believe it’s going to come to that on this,” Cuomo said. “This would be a declaration of war on states, a federal declaration of war.“

Right now there are 22 US states which could threaten to sue Cuomo for the infections New Yorkers gave them.

It was weapons grade bluster on March 28, 2020, but which media outlets and creatures from the Swamp supported Donald Trump, and pulled up Cuomo for statements like this?

“Then we would be Wuhan, China, and that wouldn’t make any sense,” [Cuomo] said, adding that this [a two week quarantine] would cause the stock market to crash in a way that would make it impossible for the US economy to “recover for months, if not years”.

“You would paralyse the financial sector,” he said.

How much healthier the financial sector must look now that the 52,000 New York infections have become three and a half million infections across the US?

So finally, hypocritically, but sensibly, Cuomo has started closing borders; though the enforcement is too weak, and leaks are already occurring. Australia tried this, and it didn’t work. The NY quarantine will get tougher.

In other handy hints from Downunder we suggest using security guards that don’t sleep with their subjects.

July 13: The move is part of the state’s effort to try to enforce its 14-day quarantine requirements for travelers from 22 states who, as of Tuesday, are under a travel advisory because of rising numbers of people testing positive for the coronavirus in their states.

“We can’t be in a situation where we have people coming from other states in the country bringing the virus again,” Cuomo said during a press conference. “It is that simple.”

Travelers who leave an airport in New York state without filling out a form could face a $2,000 fine and be required to attend a hearing and complete a mandatory quarantine. 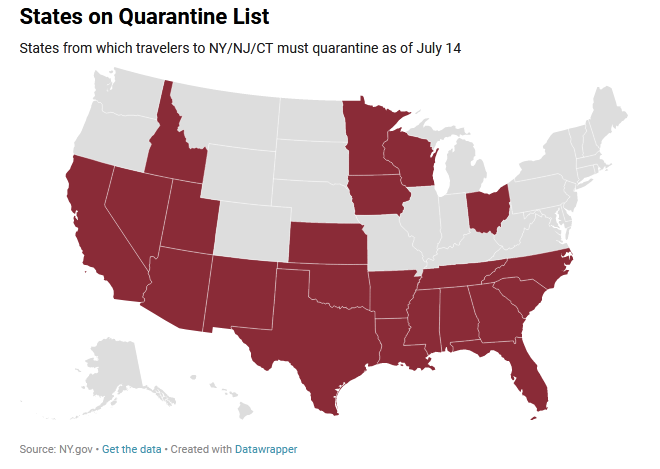 It’s not clear how NY officials will be able to enforce the 14 day self isolation required of travellers who fill in the forms.

It’s the same pattern all over the world

Borders are the bargain tools to starve viruses. Only arrogantly rich nations can pretend they don’t need them. But even they succumb after the first wave of rampant RNA.

As usual, it’s all so selfish. Infected states want to keep borders open, sharing deadly germs. The same states suddenly change their minds when the places-they-infected start to send infections back.  It happened with China, with New South Wales, and now it’s happened with New York.

How different the world looks when your home has survived the first spike.

How naive all the other states look for letting the virus fly in.

The Swamp has been either incompetent or sabotaging Trump. Borders should be the first tool (after masks) not the last.

If the state and federal lines had been shut in March, with masks and Vitamin D, with HCQ and mass testing, the US might have been down to just a couple of hundred new cases a day like Italy Some states would be completely free. Trump would have been seen as a hero. He’d be unstoppable.