The SARS-Cov2 virus can take over and does some pretty cool engineering. (At least in the case of monkey cells.)

The infected cells produce hairy tentacles that poke holes in nearby cells to help spread the virus. 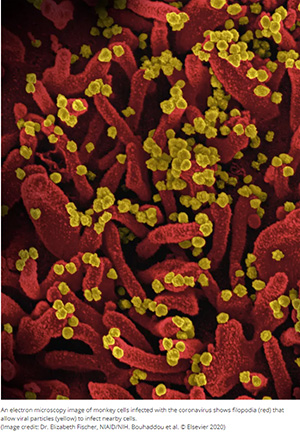 So once a virus is inside it can not only hijack the cell to make more viruses (the little yellow prickly balls in the photo) it also forces the cell to make all these hairy tentacles to push the viruses into neighboring cells. Apart from being a neat gee-whiz moment in molecular construction, this is worth knowing because it gives us more targets to aim for. (More moving parts to throw spanners at).

To that end, the team found 87 drugs that are already either FDA approved or in clinical trials that might help. And 7 of them have already shown they can inhibit the virus in both human and monkey cells.

There are some major molecular engineering battles going on

Coronaviruses are larger RNA viruses than most, so that gives the virus more tools to work with. All up we know that there are 27 SARS Cov2 proteins which are interacting with as many as 332 human proteins. In the new study the researchers studied all the human proteins that appear to be phosphorylated during infections. The proteins that slap on the phosphate groups (which phosphorylates the proteins) are called kinases. Marking a protein this way activates or deactivates the protein. It’s used in many intracellular pathways, and kinases are master switchboard controllers. So the virus is going straight to the top of the management team in a hostile takeover.

The research team found that nearly 10% of all the 500 kinases they studied were behaving differently, especially the Casein Kinase II (CK2) kinase. This gives us some idea of what kind of intracellular octopus we are dealing with.

From the press release:

Interestingly, while studying the impact of SARS-CoV-2 on CK2, high resolution imaging of virally infected cells produced by the NIH/NIAID/Rocky Mountain Laboratories and University of Freiburg revealed actin-rich filopodia containing viral proteins. Human CK2 and the viral N protein were found co-localized within the filopodia, suggesting that SARS-CoV-2 hijacks CK2 and co-opts it into creating these tentacle-like protrusions that poke holes in their neighboring cells.

Conversely, other viruses including vaccinia, Ebola and Marburg take over the host cell cytoskeleton to promote egress and rapid cell-to-cell spread. However, in SARS-CoV-2 infected cells, the filopodia exhibit longer tentacles and branches, enabling more aggressive transmission than some other viral infections.

Another kinase called the p38 MAPK which may be a zinger of a target since it’s involved in activating the inflammatory cytokines (the interleukin-6 and other messengers). So we may be able to throw anti- p38/MAPK drugs at the virus which appear to both switch off the deadly inflammatory cascade as well as slow virus replication by some unknown means.

Of course, the study was done in monkey cells so this may or may not be the same in human cells. And drugs that stop these kinases may  have side effects, and even if they work, the virus may still be able to spread through other means.  But if we even find one good spanner to toss in here, it may slow the spread of the virus, which buys time for our immune system to fight back and reduces the amount of virus a victim may shed. It also should reduce the amount of damage the virus can cause.

Possibly if the virus mutates to avoid triggering the deadly immune cascade it may become nicer and stop causing such a severe disease.  If we throw drugs at it that lock down this mechanism we will be in effect selecting for a virus that doesn’t need to use it.

Mark it up as part of the new era of anti-virals.

Information thanks to LiveScience