Adelie Penguins would probably benefit from a bit of global warming. When 175 were tagged and tracked it turned out that they ate more krill when there was less sea ice. This is not so surprising given that they swim better than they waddle, so long stretches of sea ice make it harder to get to the supermarket and back.

And Krill (dinner) apparently like less sea ice too. Phytoplankton bloomed when the sea ice was gone. 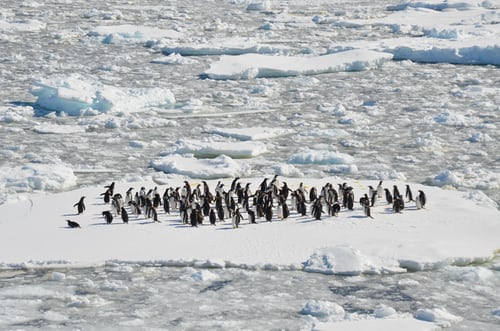 Penguins on sea ice.  Photo by Danielle Barnes on Unsplash

Penguins may be an unlikely winner from climate change

“Counterintuitively for this ice-dependent species, body conditions and breeding success ­improved in the ice-free environment,” wrote researchers from the Japanese National Institute of Polar Research, in the journal Science Advances.

The scientists used accelerometers, video cameras and tracking devices to plot each hunt. They found that when there was no ice the penguins did a lot more swimming — and this was a good thing.

“For penguins, swimming is a whopping four times faster than walking.

For the first three seasons the sea ice was large, then it shrank and the penguins went crazy:

When sea ice is higher penguins don’t breed as well, and populations are less likely to grow. Though for the 30% of penguins living in the warmer parts of Antarctica, the pattern is the opposite.

Of course, a warmer world may or may not mean more sea ice. For most of the last few decades Antarctic sea ice grew til it reached record highs in 2014-2015. Then during the last few El Nino years Antarctic Sea ice plummeted to record lows, and nobody can figure out why.  If only climate scientists understood the climate.

Whatever happens, it may take a while for Adelie Penguins to die out in Antarctica because there are about 15 million of them. And they are pretty well adapted to climate change since Antarctica was warmer 1,000 years ago, and about 40 other times in the last 10,000 years.

But penguins that need a perfect climate are dead.