Fascinating. Could one shot of radiation calm Covid infected lungs and stop the severe cytokine storm?

In a trial in the US, five very sick Covid patients with a median age of 90 were given a “low dose” (which is not so low) of 1.5 Grey (150 Rad) of Photon beam radiotherapy (in a front and back beam configuration.) It took only 10 – 15 minutes, and four of the five showed “rapid improvement” in 24 hours. Their oxygen levels and alertness improved. They were sent home from hospital 12 days later.

The good thing about this is that apparently most hospitals already have this equipment, so they could start helping people right away (assuming it works, which we don’t know yet).

In theory, the shot of radiation is not “killing the virus” but is changing the immune response — and may be able to stop the deadly cascade of the cytokine storm. It calms the immune system in at least three ways (see the chart). 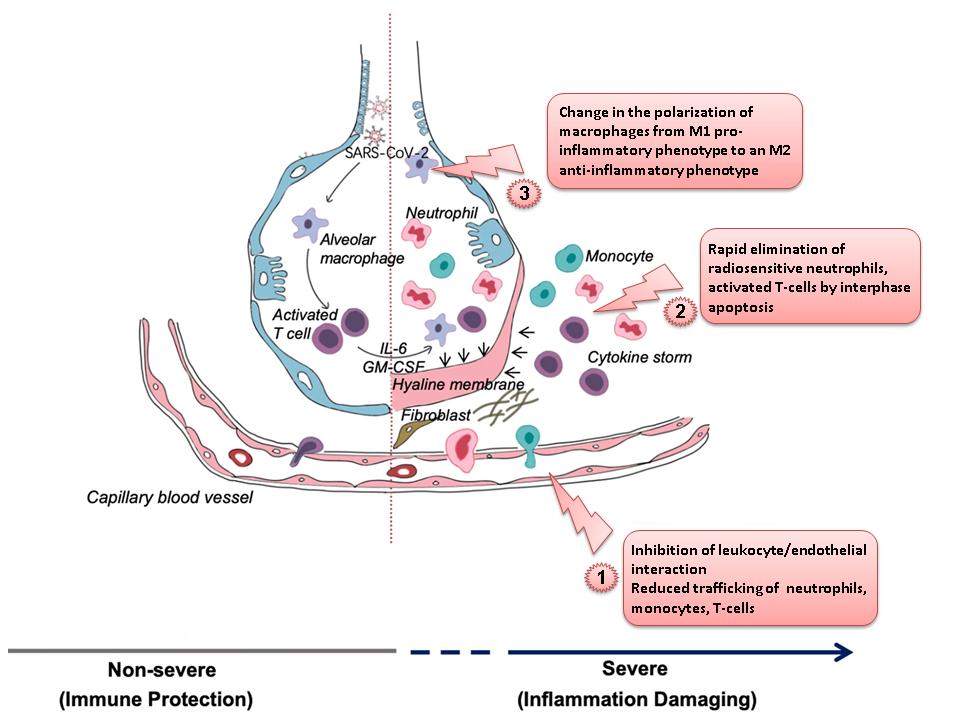 The curious thing about this is that it is an old treatment, and an old idea. “Hormesis” is a phenomenon where low grade damage elicits a healthier response than no damage. It’s the idea that our bodies are adapted to low grade toxins and healthy repair mechanisms have evolved to deal with them. When we eat toxic plant molecules, we now know it ramps up our liver “detox” pathways — which means for example — that garlic and broccoli up-regulate phase II enzymes of cytochrome p450. The activated enzymes then also remove other toxins faster, so the net effect of low dose toxins is beneficial. People have been suggesting for years that low dose radiation might not only be safe, but useful. Though in all things “hormesis” the dose is everything. Too high a dose has the opposite effect of a lower dose.

These studies indicated possible mechanisms by which low doses of radiation mitigates inflammation and facilitates healing, one being the polarization of macrophages to an anti-inflammatory or M2 phenotype. The M1 type tends to overstimulate the immune system which can lead to a cytokine storm, while the M2 type tends to suppress the overreaction of the immune system.

We kind of knew this would work because we did the same thing 70 to 80 years ago. Dr. E. J. Calabrese at the University of Massachusetts School of Public Health & Health Sciences and Dr. Gaurav Dhawan at the University of Massachusetts reviewed how X-ray therapy was used during the first half of the 20th century to successfully treat pneumonia, especially viral pneumonia like that caused by this coronavirus.

Unfortunately, 70 years of irrational and unfounded fear of low doses of radiation, even those doses that occur naturally in the environment, have prevented testing of many of these treatments.

How low is this dose? Don’t try this at home

According to this site, a normal background radiation dose is 0.00365 Gy (3,650 µGy or microGray). So a 1.5Gy dose is about 400 years of normal radiation. That doesn’t sound “low” to me! Though it’s only equivalent to 15 years of living in Ramsar, Iran, and 8 years on a Brazilian Monazite beach.

A full body 5 Gy dose will kill 50% of people within a month. So this 1.5Gy dose is rather serious. The docs report that there were no apparent side effects in these very sick 90 year old people.

Using radiation to treat pneumonia is an old treatment

When this tiny trial was announced in late April, they talked of people being treated with radiation successfully 100 years ago:

The therapy involves a single treatment with whole-lung LD-RT delivered on a quarantined linear accelerator, followed by a one-week observation period in which clinical, radiographic, and immune outcomes will be tracked for safety and benefit. Depending on the safety and benefit demonstrated by the first cohort, investigators expect to launch a second cohort of five patients. According to investigators, the inherent risks of LD-RT are low.

Given the not-so-low doses here, this is not a treatment I would want to rush into myself. But if I were 80+ and my choices were mechanical ventilation, or this, this trial would look pretty appealing.

Where is the data?

Frustratingly the sole report of this is the Forbes news story and it’s not explicitly stated if all 5 were sent home or only 4 were. Since the doctors were “excited” and no deaths were mentioned we presume that the fifth patient did recover, though even a 20% mortality rate in late stage severe Covid patients is not necessarily an awful outcome. Mortality rates are as high as 50% in this age group if they end up in ICU on a ventilator. No one is going to pretend a study this small is numerically significant, but the doctors obviously felt the results show great promise. Other doctors must be excited too. Trials are currently starting in the US, Italy, Spain, Iran and India (see the ClinicalTrials.gov website).

Clearly this is an interesting idea to toss about. Looking forward to some data…