New research of the WuFlu “gene” lineage in the UK show that the virus kept being introduced via planes, trains and cars. The entire time that UK residents were being restricted in lockdown, tens of thousands of people were allowed to bring virus in through the border. Sabotage or Incompetence? The single failure to quarantine arrivals in the UK means the lockdown has gone on longer than it needed, cost more than it had too, has been less successful, and now, as the UK reopens, it does it with infections still running, when it could be doing it “like New Zealand”.

The BBC news mentioned that there were a lot of imported cases, that the biggest variety of genetic variants came from Spain, France and Italy and not China. But one tantalizing finding was that the UK transmission lines now appear to be “very rare or extinct”. Which surely implies that the lockdown is working, the UK lines are dying out, and that … by golly, the new infections must be regular incoming virus?

Instead, according to the BBC the big surprise in this study was that there was “no patient zero” who went on to give 300,000 people in the UK Covid, though it’s hard to believe anyone older than six thought that was even possible.

In February a quarter of million people flew into the UK — that’s not in February “the month”, — it’s every single day. In a world of exponential rising infections surely even preschoolers can figure out the odds that millions of travellers were flying in from a world of sick, and somehow were not sick themselves.

In March, 20,000 people a day were flying in from Spain, where the infection was running rife. Many of these would be British people returning home. The study shows the incredible folly of keeping borders open.

Coronavirus came to UK ‘on at least 1,300 separate occasions’

The study, by the Covid-19 Genomics UK consortium (Cog-UK), completely quashes the idea that a single “patient zero” started the whole UK outbreak.

They found the UK’s coronavirus epidemic did not have one origin – but at least 1,356 origins. On each of those occasions somebody brought the infection into the UK from abroad and the virus began to spread as a result.

“The surprising and exciting conclusion is that we found the UK epidemic has resulted from a very large number of separate importations,” said Prof Nick Loman, from Cog-UK and the University of Birmingham.

“It wasn’t a patient zero,” he added.

The big surprise for me was that the number was so small. But the full study shows this is the tip of an iceberg. They analyzed data from 16,506 UK genomes, and another 12,000 genomes from other countries. So they looked at about 5% of the  known coronavirus infections in the UK (which is still an impressive sample). So when they say 1,300 separate infections arrived, the researchers admit “We expect the number is an underestimate”.  But it could be that 30,000 cases arrived across those open flowing borders. The researchers certainly don’t say that. They add that they do not attempt to measure the contributions of importation versus local transmission, nor to model the impact of the public health interventions. There are many caveats, and many assumptions. They have to estimate how fast the mutations are happening, how quickly they spread, how long it took to detect them, and how many of the subsequent transmissions they sampled.

Most of the 1,356 lineages lasted for a month or so and died out. If those variants had successful spread and mutated they would look different to what they did on March 1 but there would still be a continuous chain of changes. The lineage wouldn’t have died out. 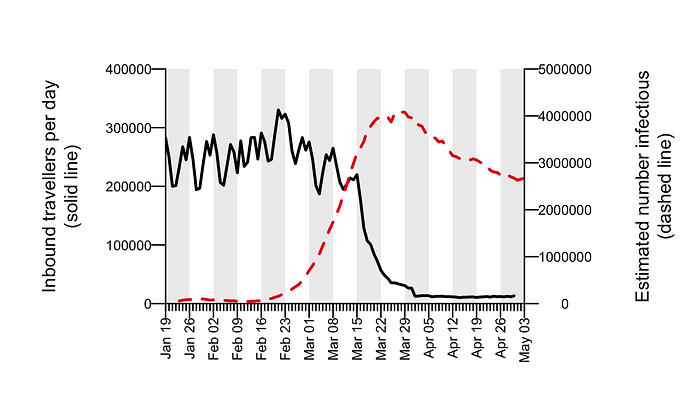 How many of these new cases are from planes, trains and cars? How low would this tally be if instead the UK had put in border controls at the same time as it started major restrictions at the end of March? Mobility trackers show the UK was slowing down for most of March, and by the last week of March reached a full lockdown.

UK Borders are Still Not Closed

Even though, as of this week, the UK government is demanding all arrivals self-isolate for two weeks, they are only collecting names and addresses and promising to check on some of them. There’s a  £1,000  fine for breaches, but only a £100 fine for people not filling in the form. (Seems like a cheap alternative to two weeks quarantine). The isolation is not only not enforced, it is not even a full 100% requirement — as those in self isolation are asked not to visit pharmacies and what not, unless they absolutely have to, and can’t find a friend to do it for them.

How not to quarantine people:

Individuals quarantining will be permitted to shop for food essentials and medicines but only if it is not possible to rely on others, and will be able to take public transport to their designated accommodation.

About a fifth of people are expected to receive a spot-check to ensure that they are staying at the address or addresses they have provided to the authorities, the Guardian understands.

Australia tried this kind of weak border control in March, and learnt quickly that it didn’t work. When Victorian police tried to check on arrivals, even though there were $1,652 dollar fines  for breaches, 10 to 20% of those in self isolation were not home when police turned up, and some had given false addresses. By March 28th all incoming travellers were put in enforced hotel quarantine. They were escorted to the hotels, separated, guarded, fed, and tested.

As I’ve said before, and this study shows, the biggest mistake the UK Swamp made — apart from being unprepared was leaving the borders open. Which are still not closed. The UK aimed for Herd Immunity (that was the excuse for keeping the borders open, while the rest of the world closed them), a deadly mistake that killed tens of thousands of people who didn’t need to die, and also cost billions upon billions of dollars in pointless damage to the UK economy.

Have you got Coronavirus, do you live in the third world? Where’s the best place you could fly for safety and healthcare? — London.

Since the sizes of transmission lineages vary considerably, this result does not imply that 34% or 29% of UK cases were descended from importations from Spain or France, respectively.

On average, about 50% of inbound travellers during 2020 are British nationals.

For example, we assume that the probability of a traveller from country X being infectious is the same as that of a member of the general population of country X on the same day. This may be unrealistic when prevalence and rate of inbound travel vary among regions in a country.

Identifying UK-specific transmission lineages of SARS-CoV-2 is a complex problem. The estimated number of introduced lineages is likely to be conservative because we have virus genome sequences for only a small fraction of UK infections (perhaps 1-5%), hence many transmission lineages will have gone undetected; larger lineages are more likely to be detected than smaller ones. Furthermore (i) under-sampling of genomes from other countries will result in the mistaken aggregation of separately-introduced UK lineages, reducing the number of detected lineages, and (ii) 42% of UK genomes (n=6954) cannot be allocated to a UK transmission lineage on the basis of virus genetic relatedness (singletons). However, given the rate of SARS-CoV-2 genome evolution and the low fraction of sequenced, some of these singletons are likely to belong to UK transmission lineages (detected or undetected).

TMRCA (time of the most recent common ancestor)

Things worth knowing about Coronavirus: