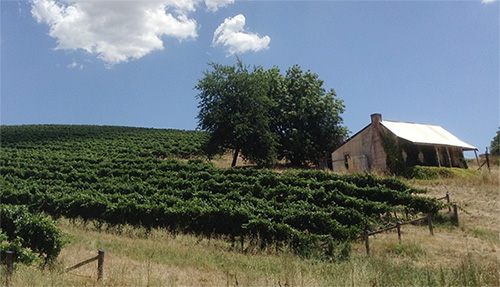 Somewhere in Victoria.  | Image by veronoumea

It’s just another day in the death of investigative journalism

Notice the way the words shift. The ABC told us tonight that a new “Atlas” will “chart” the temperature for wine growing regions in Australia, as if charting is what we do when we are taking a blind guess with a broken model at the future. Once upon a time, atlases mapped things that already existed.  The ABC and Uni Tas are just staring right into the future. Neat advertising eh?

Makes you wonder why we bother with thermometers.

The ABC News is like reading Harry Potter. The Hunter Valley is not predicted to get warmer, it’s “destined” to. Gone are the qualifiers: where once people might have to adapt, now they’ll be forced to.  In gushing form, the ABC quotes shocked farmers saying “It’s pivotal”, “a line-in-the-sand body of work” a “wow moment” and a “world first”, as if Tasmanian scientists discovered the magical Marauders Map itself.  It’s also like no group on Earth has ever tried to predict the climate of wine regions before. If the ABC interviewed a skeptical farmer it would have broken the camera.

If Uni of Tas hired an agency to run an advertising campaign, they couldn’t have done better than the prime-time, supposedly “investigative” segment on what we used to call news.

Pity the poor viticulturist who changes grape varieties, irrigates, or buys up a cold farm.

There is no mention of “uncertainty”, “projection”, “estimate” or any hint that there might be one living scientist in the world is not flat-out-drooling with excitement.

The ABC could have interviewed one of the greatest viticulturalists in Australia, but they wouldn’t like what he has to say.   If you know someone growing wine, tell them to read John Gladstones, Wine, Terrior and Climate Change. Gladstones wrote The definitive text for the industry 30 years ago. He’s very much the industry guru, and not surprisingly — also a skeptic.

Watch this story on ABC TV’s Landline at 12:30pm or on iview if you can bear.

Save the children, and our Australian wine industry. Sell The ABC.

A world-first research document about to be released has detailed how Australia’s famous winegrowing regions will be forced to adapt due to climate change.

It charts an 80-year course for climate change, including temperature, rainfall, aridity and frost for each of the country’s 71 wine regions.

“It’s pivotal; I think this will be a line-in-the-sand body of work,” said Hunter Valley viticulturist Liz Riley, one of the first industry insiders to analyse the data.

With the Hunter destined to become three degrees warmer by 2100, with more intense and frequent heatwaves and more rainfall, Ms Riley is concerned for the health and safety of workers who will need to endure hotter, more humid conditions during the harvest season.

Shh. Nobody mention how reliable models are with rainfall OK? As in, “skillless”.

All eight wine regions in Tasmania will become hotter, some will become drier and others slightly wetter, but the water availability will be reduced, measured by an aridity index.

Who knew that all the human emissions since Ned Kelly was born made no detectable difference to the last 178 years of Australian rainfall. Not the ABC.

“It’s going to get hotter and drier in most Australian regions,” said lead author Tom Remenyi, from the University of Tasmania’s Climate Futures Group.

“That warming, drying trend is because as the temperature increases, there is more evaporative demand, so there is this drying pressure on the landscape which would require it to increase in rainfall to maintain the same balance we have at the moment.”

May the Lord have mercy on farmers who rely on UTas:

They do not have any irrigation, but concede they may need to in the future if, as the data suggests, the region becomes more arid.

“To have really detailed numbers and projections for the next 20, 30, 40, 50 years, it’s hugely beneficial,” Ms Lipscombe said.

“We can make really concrete plans on what we need to do and how we need to approach the next few decades.”

The PDF is not even available yet. We must wait til Monday to read the legal fineprint declaring that they will take no responsibility for losses or damage caused, or lives ruined, or investments wrecked.