Watching the photos and twitter feed from China it was obvious something terrible was happening and the official numbers did not add up.

For example, there were reportedly 90,000 hospital beds in Wuhan in 2018, yet another 100,000 beds were suddenly urgently added in schools, hotels, and pop-up new hospitals, even though there were only 30,000 official cases. Some 169,000 ventilators were supplied to Wuhan, which was inexplicable if there were only 50,000 total cases during the whole pandemic.

Remember on February 6th when keen observers noticed that the Tencent Virus tally board had been flickering with a ghostly alternate count that was ten times higher than official numbers (and 80 times higher in deaths). We wondered if someone was trying to leak out the real situation. 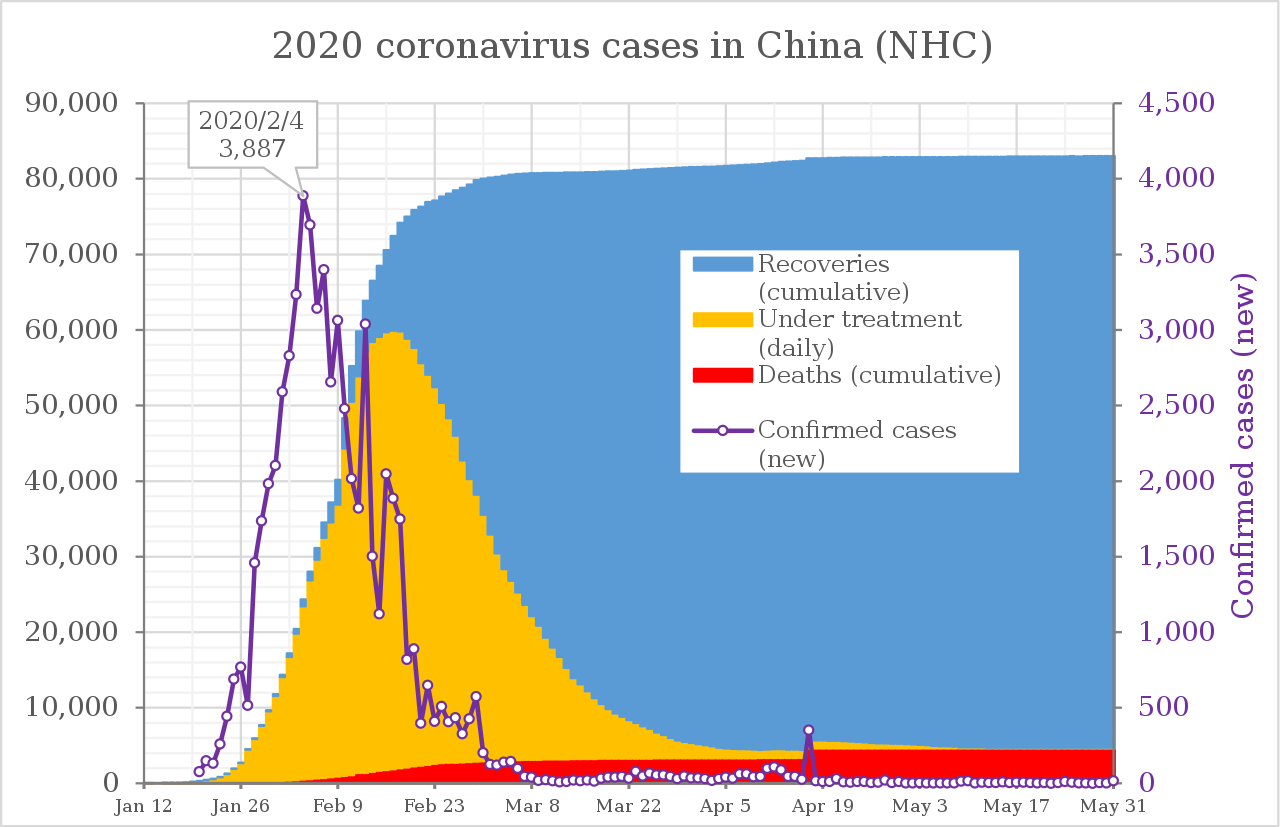 The official Coronavirus count in China Image by Pheonix7777

Three months after all these discrepancies,  CNN, BBC and co. would still be treating Chinese figures like they meant something. Most media institutions were reporting meaningless “sombre moments” as one country after another overtook a mythical Chinese data point. “Italy has overtaken China”, Spain has…. None of the news giants looked further or even said “alleged figures”.

The new study by Mai He et al (USA) tries to estimate the real Chinese death toll from cremation data and finds it was at least ten times higher, and the case load was possibly up to 30 times larger. But they hint that the numbers may be even higher still. So much is unknown.

There are eight crematoriums in Wuhan, which normally operate for just four hours a day each morning as is customary in China. But by January 25th, 2020 — these were operating around the clock, working at six times their normal speed. The researchers estimate they were disposing of between 800 and 2,100 bodies each day. Some 36,000 urns were also tracked to Wuhan. But even above and beyond all this, it’s estimated there were also 40 mobile crematories which were brought to Wuhan after February 19th. The study team writes that ‘the mobile crematory stations can each process five tons of “medical waste”, including “animal dead bodies” per day’.

Their estimate of 36,000 dead in China, does not include any from the mobile crematories.

By late January, Wuhan’s hospitals were already reportedly under severe strain. They offered 90,000 beds. Another 100,000 beds were activated in hotels and schools. Yet Beijing’s figures reported only 33,000 COVID-19 cases.

By March 23, 42,600 doctors and healthcare workers had been rushed to Wuhan from other provinces to support the 90,000 already there. But Beijing reported only 50,000 cases.

Before Beijing’s crackdown, China’s bureaucracy had been conducting business as usual – analysing, assessing and reporting on everything about its citizenry. The researchers from Washington University and Ohio State University say they have tracked down this early government data and combined it with reports in state-controlled and social media.

The problem is, that in a secretive nation of 1.3 billion, a million people could die and it might not easy for outsiders to keep track.

In Table 3: the largest estimates for cases of Covid19 in Wuhan were 2.2 million — but that is only up to February 7th, and does not include other areas in China.

Background: Epidemiological data provide important information for decision making. COVID-19 statistics from China fall outside of recognized and accepted medical norms. As the epicenter of the COVID-19 initial outbreak, the epidemiological information from Wuhan affects the response and preparation of other parts of China and rest of the world. Here we estimated the incidence, death and starting time of the COVID-19 outbreak in Wuhan and China based on medical literature from China, official and non-official Chinese data sources. Methods: Data sources included literature on COVID-19 in China, official Chinese government figures, state-run and non state-run media reports. Our estimates are based on investigative media reports of crematory operations in Wuhan, which is considered as a common data end point to life. A range of estimates is presented by an exponential growth rate model from lockdown (Jan 23,2020) until the intervention started to show effects, which was estimated 14.5 days after lockdown. Results: For the cumulative infections and total deaths, under different assumptions of death rates (from 2.5% to 10%) and doubling time 6.4 days, the estimates projected on February 7, 2020 in Wuhan range from 305,000 to 1,272,000 for infections and from 6,811 to 7,223 for deaths – on the order of at least 10 times the official figures (13,603 and 545). The implied starting time of the outbreak is October 2019. Under the assumption of the official 3.14% death rate and doubling time of 2.54 days (which was derived based on Chinese official data), the infection cases reached 2.2 million on February 7. The estimates of cumulative deaths, based on both funeral urns distribution and continuous full capacity operation of cremation services up to March 23, 2020, give results around 36,000, more than 10 times of the official death toll of 2,524. Conclusions: Our study indicates a significant under-reporting in Chinese official data on the COVID-19 epidemic in Wuhan. The magnitude of discrepancy between our estimates based on cremation related data and Chinese official figures in early February, the critical time for response to the COVID-19 pandemic, suggests the need to reevaluate official statistics from China and consider all available and reasonable data sources for a better understanding of the COVID-19 pandemic.