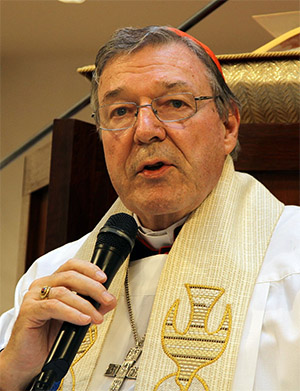 George Pell was on the wrong side of every fashionable cause: An old white man, a christian, and a climate skeptic. He threatened the religion of political correctness in every way, and a witch hunt made him target number one. Despite his position of power and influence, the best evidence the pogrom could find was the word of one boy, decades later, with no corroborating evidence. The irrational groupthink fashion swept through juries, judges and even the Victorian Court of Appeal. But today in Australia the High Court, the final last chance for justice, freed George Pell from jail 7-0.

He was convicted and imprisoned over the most heinous of all crimes on the word of one anonymous complainant, whose testimony was unsupported by any other witnesses, or any forensic evidence. The same fate could befall any Victorian.

The media lynch mob and the entire Victorian legal system stand condemned. The unanimous decision of the High Court is a conclusive repudiation of everyone involved in the false imprisonment of Cardinal George Pell, every politician, every cop, every lawyer, every journalist, every coward…

It seems distant and forgotten but in 2011, Pell was not just a little bit skeptical, he was a well informed and outspoken skeptic (see his impeccable reasoning carefully stated in a GWPF speech below). He was also at one point third highest ranking Cardinal at the Vatican.

Pell would have been a target no matter whether he was a climate skeptic, but imagine he had embraced the climate scare wholeheartedly. Would it have protected him? Would that have meant the witchhunt would have picked a different high ranking Catholic?

In his first statement since his conviction Cardinal Pell, 78, said he had no ill-will towards his accuser, whose story was rejected 7-0 by the High Court.

And if being a climate believer can hold off the wolves, would that mean those who are guilty of real crimes are more likely to wear the believer cloak?

Those who used real victims of sexual assault as mascots in their political pogrom have done so much damage to that cause. The ghost of repressed memories still haunt the quest for justice.

Pell is brave and intelligent and powerful, and he had to be cut down:

The irony is that a man calling for climate change to be decided on evidence was jailed and demonized for years, based on no evidence, bar the word of one.

Be Prudent with Climate Claims

This is an edited extract of a speech given yesterday at the Global Warming Policy Forum in London. Watch the whole speech.

I first became interested in the question in the 1990s when studying the anti-human claims of the “deep greens”. Mine is not an appeal to the authority of any religious truth in the face of contrary scientific evidence. Neither is it even remotely tinged by a postmodernist hostility to rationality.

My appeal is to reason and evidence, and in my view the evidence is insufficient to achieve practical certainty on many of these scientific issues.

The basic issue is not whether the science is settled but whether the evidence and explanations are adequate in that paradigm.

I fear, too, that many politicians have never investigated the primary evidence.

Much is opaque to non-specialists, but persistent inquiry and study can produce useful clarifications, similar to the nine errors identified by the British High Court in Al Gore’s propaganda film, An Inconvenient Truth.

The complacent appeal to scientific consensus is simply one more appeal to authority, quite inappropriate in science or philosophy.

It is not generally realised that in 2001 at least, one of the Intergovernmental Panel on Climate Change Third Assessment Report’s workinggroups agreed: “In climate research and modelling, we are dealing with a coupled, non-linear, chaotic system, and therefore that the long-term prediction of future climate states is not possible.”

Claims of atmospheric warming often appear to conflict and depend upon the period of time under consideration.

► The earth has cooled during the past 10,000 years since the Holocene climate optimum.

► The earth has cooled since 1000 years ago, not yet achieving the temperatures of the Medieval Warm Period.

► The earth has warmed since 400 years ago after the Little Ice Age three centuries ago.

The following facts are additional reasons for scepticism.

► In many places, most of the 11,700 years since the end of the last ice age were warmer than the present by up to 2C.

► Between 1695 and 1730, the temperature in England rose by 2.2C. That rapid warming, unparalleled since, occurred long before the Industrial Revolution.

My suspicions have been deepened through the years by the climate movement’s totalitarian approach to opposing views. Those secure in their explanations do not need to be abusive.

The term “climate change denier”, however expedient as an insult or propaganda weapon, with its deliberate overtones of comparison with Holocaust denial, is not a useful description of any significant participant in the discussion.

The real crime here is what Victorian politicians did to the justice system.

Miranda Devine:  The onus of proof has been turned on its head in Victoria

His false conviction raises urgent questions about the jury system, for so long the bedrock of our criminal justice. But that system was perverted by politicians pursuing ideological outcomes, who created legislation in Victoria that altered the balance of justice, so that defendants in sex trials now have to prove their innocence, turning the onus of proof on its head.