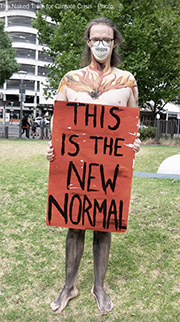 Do young adults  learn anything that matters in school?

They’re protesting in the streets but can’t even answer the most baby-basic questions about energy or their pet molecule “CO2”.

It’s almost like carbon dioxide is totally irrelevant? Teachers don’t care. Kids don’t care. Media don’t care, and when they all grow up the adults won’t care either.

Only 26% of people aged 18-24 understand that nuclear power is a low carbon source of electricity, compared with 76% for renewables such as wind and solar, according to a new poll by the Institution of Mechanical Engineers (IMechE).

Older people are more likely to say that nuclear power is low carbon. The poll found the level of understanding rising from 47% among 35 to 44-year olds to 61% among 65 to 74-year olds, although it remains well below levels seen for renewables.

Good on the Mech Eng’s for asking. I call “fake” on the protesters that tell us the world is at stake but can’t be bothered learning the basics.

Wait til they find out they’ve been dragooned into being free advertising for conglomerate industrial capitalists.

Where is the Education Department?