WHO announced their estimates of 3.4% global mortality today. All the caveats apply — it includes rubbery-figures-from-China and comes from the Useless UN and a group headed by a star apologist-for-Xi. But here’s the thing, look at the numbers outside China (see the big table below), and its a similar ballpark. Sorry to rant on about this virus.

The World Health Organization had said last week that the mortality rate of COVID-19 can differ, ranging from 0.7% to up to 4%, depending on the quality of the health-care system where it’s treated.

Don’t look now: Big Numbers Coming. Assuming 60% of people catch it before some treatment appears, a death rate of 0.7% – 4% means bad news for some furry number from 100,000 to 600,000 Australians. Double that for the UK. And 1.4m – 8m in the United States. There is a wide range of mortality rates, which may reflect that there are two kinds of mortality rates here — one where people get great ICU care, and one where hospitals are overrun and they don’t. We’ll probably pin that to the low end if we keep cases limited, we eat well, don’t smoke, don’t have wild pollution, and hopefully we’ll get better and better at treating it. But even the low end numbers here are Not Nice. What this means is mass disruption to keep those numbers down — schools closing, factories stopping, no parties, delay the Olympics, etc etc.

The long lag is a bomb. It can be five weeks from infection to death and bureaucrats are weeks behind the virus.

Hunting for good news, on the Diamond Princess, numbers are not so awful: based on 691 cases eight days ago, five percent are now classed as severe and the mortality rate of 454 patients two weeks later is only 1% (assuming all the deaths are correctly recorded there by Worldometer, and the severe cases stay on the “severe” list if they get well, which they might not). The Diamond Princess would be an older demographic too — so these numbers suggest that mortality is at the lower end of the WHO range. Maybe even “only 0.5%”. Clutch at good straws and hold on to that thought.

Looking across lots of countries (but not China, Korea, Italy or Iran) and based on 867 cases that were known just over two weeks ago, the mortality rate is a daunting 3.7%, and based on 1334 cases eight days ago, the rate of progression of all known cases to severe is 7%. If correct (and they may not be) these are the kind of numbers that would freak a hospital manager out. These don’t come from China, South Korea, Iran and Italy — all of which clearly have a lot more cases that they didn’t know about two weeks ago. So, see the table below, this is data from nations like Japan, USA, Hong Kong, Germany, France and the UK. They’re rough, not always taken at the same time of day, they may double-count Diamond Princess deaths (in national tally’s and boat tallies — any one know?) Feel free to point out mistakes.

These numbers are a train wreck for hospitals, even at the lower end. State Ministers in Australia got briefed recently and appear to understand that now as they they tend to be using the phrase “we may not have the resources”. Translated, that’s the code for “not enough hospital beds”. They’ve already warned people with symptoms to stay home. How fast we shift from chartered rescue flights and individual attention to “just call us, and stay in bed”. A few weeks is a long time in an unfolding pandemic.

Governments have been consistently two weeks behind this virus.

Everything they’ve done would have been so much more effective if they did it two weeks before they did. Now is the time to leap up and get ahead. Look at where South Korea and Italy are now, and just do it. We’re going to have to do it soon anyhow.

Modeling in Western Australia suggests the viral load here will rise in a few weeks, peak in August and settle down in Spring.The timing is about as bad as possible for us. 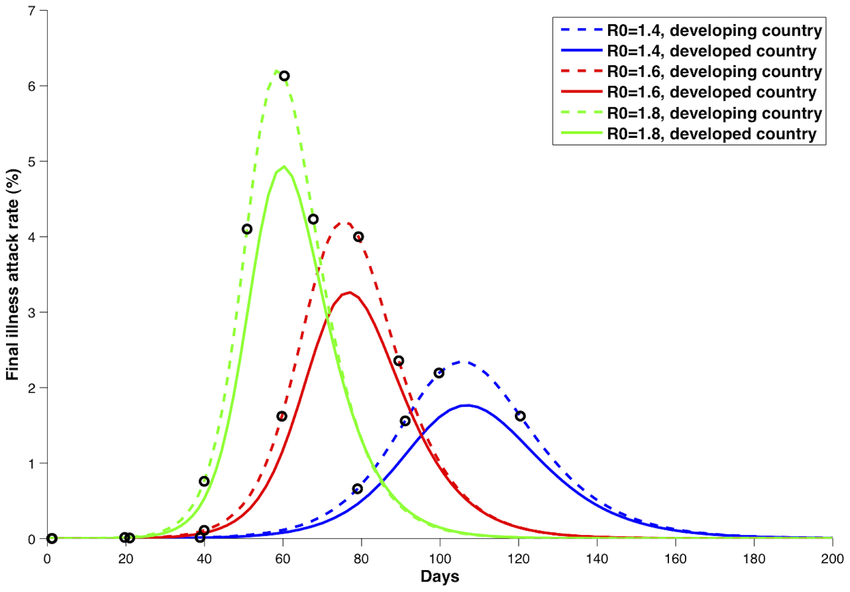 The curve we want to flatten. The Ro, Reproductive curves of infectious diseases. ResearchGate

It doesn’t have to be that way. No cases confirmed yet in WA (apart from the Diamond Princess cases). Thousands of deaths are coming, and don’t forget mass disruption to schools, uni, businesses, factories and elective surgery. All that in the offing and no one wants to cancel some holidays and flights to slow the train down? Are we so addicted to weekends in Bali and interstate footy trips that it’s unthinkable to just say “hang ten for a few weeks?”

WA’s chief medical officer Andrew Robertson said an outbreak in the state was now “probably inevitable”. “There are measures that could help delay it, certainly some of the border measures, [plus] self isolation and possibly quarantine if needed,” he said.

“And we will continue to try and contain this disease. But we accept that we have to prepare for the next stage and make sure that our systems are best prepared for the likely pandemic.” Many non-emergency elective surgeries are expected to be cancelled and doctors and nurses working desk jobs may be redeployed to treat patients on busy hospital wards. — ABC News

‘We may not have the resources’: Minister

If there are no nice wildcard surprises coming (new antiviral, lucky break, freak discovery) —  the aim of the game is to flatten the curve, slow the exponential growth and keep as many people as possible uninfected and out of hospital. That means no more unnecessary flights, no mass events, close the schools, do church online, get people to work from home if they can and do mass hygiene lessons for our nations.

Everyone needs to know how to wash hands seriously well, and not touch the tap or the handle in a way that undoes the point of washing in the first place. Did you leave those germs on the doorknob on the way in, and collect them again on your way out?

The have-cake eat-cake experts. When will the media pin them down?

When community transmission is obvious and undeniable they’ll say “we expected this”.

Don’t let them get away with their double-speak.

Scott Morrison is choosing to let the virus fly in, can someone tell him these are not the deaths we have to have?

Scott Morrison almost got a hard question on the ABC last night. But he weaseled out of it — just following the expert advice, he said. No, dear leader. Do your own research. Ask some different experts. Ask some different questions. People’s live depend on you. Please send him the message (and tell Boris, Jacinta, Justin, and DJT too).

Given the gravity, we should call a halt to all flights without a two week quarantine (not pretend quarantine loopholes through Dubai, Thailand and Bali). Do it  just for a few weeks til we get more data. Winter is coming downunder. The best way to avoid this virus is to minimize trips, shopping and crowds. Start thinking about the long run.

Amazing: LA Times finds a WHO expert who makes sense:

Mike Ryan, who runs the agency’s [WHO] emergencies program, pushed back against officials who wanted to “wave the white flag” and surrender to the disease’s hold. China took drastic steps to fight the virus, he said, and case numbers are now on the decline there.

Countries such as China and South Korea “implemented very, very strong measures that have affected their own economies and their own societies,” Ryan said. “It’s really a duty of others to use the time that has been bought. “That is not a reverse you can achieve with influenza. If that is a failure, we’ll have slowed down the virus.”

There can be a big benefit in slowing the virus’ arrival in a country for a few months, Ryan said. Many countries, including the U.S, are in the middle of flu season, so large numbers of coronavirus cases would overwhelm the health system.

Too many in the deep state are waving the white flag.

LATEST TALLY OF THE BIGGIES Worldometer