A nation watches the fires. The Australian Navy has rescued around 1,100 people and 250 pets. Thousands of other have fled. Thousands more on the SE corner of Australia have been chopping down trees, cleaning properties, waiting in queues for fuel and food. Today is forecast to be as bad as New Years Eve when 380 houses burnt down. Temperatures will be above 40 C — up to 45C inland in places like Wagga Wagga.  (Right now, perhaps there’s a BOM site glitch but temperatures from Nowra south range from 30 -45?) Humidity levels will be very low. But a cooler change is coming late. Things should be much better on Sunday. Best wishes for everyone on the front line.

Suddenly, many people are taking “hazard reduction”. If only it weren’t too late.

Meanwhile the Labor Party still hope to reduce bushfires with an international carbon market. Good luck with that. A carbon market is form of carbon tax that sends money overseas and will make their friends at the UN and Goldman Sachs happy, but probably won’t impress the workers the Labor party used to serve. The only way it will stop fires is if people clearfell old growth forest to plant palm trees or corn for biofuel, to to make way for a solar “farm”. Otherwise, carbon storage = fuel for fires.

The pushback to Green policies picks up speed:

South coast residents are seething at the NSW government and councils for failing to take ­adequate precautions in hazard ­reduction burning. Numbugga locals Stephen and Janet Lennon said authorities ­failed to learn the lessons from a bushfire in the forests last August.

“They fly helicopters over there and drop (water) bombs (over state-owned forests) but 90 per cent of the time they don’t even work. And then they cast it as if they have done a burn-off, which doesn’t help,” Mr Lennon said.

“You are not even allowed to cut down trees on your property.”

Scott Morrison has flagged an overhaul of hazard reduction operati­ons in national parks and laws dictating where land can be cleared and houses built, while acknowled­ging climate change and the drought had extended Australia’s disastrous fire season.

Addressing a press conference for the first time since fires in NSW and Victoria ravaged the coast this week, the Prime Minister again held the line on his government’s climate change policies but said the national security committee of cabinet would meet on Monday to consider a short- and longer-term response.

Policy is not changing: the Labor party says we should fight fires with a carbon market (tax)

Anthony Albanese said the bushfires were a “national emergency” and called for a market-based mechanism to help combat clim­ate change.

Scott Morrison must be delighted. How many Chinese carbon credits would have stopped those arsonists?

Back in August the Bushfire and Natural Hazards CRC said the areas in red were “above normal fire risk” in what will be remembered as quite some understatement. To be fair, they couldn’t know what rain or temperatures would come. 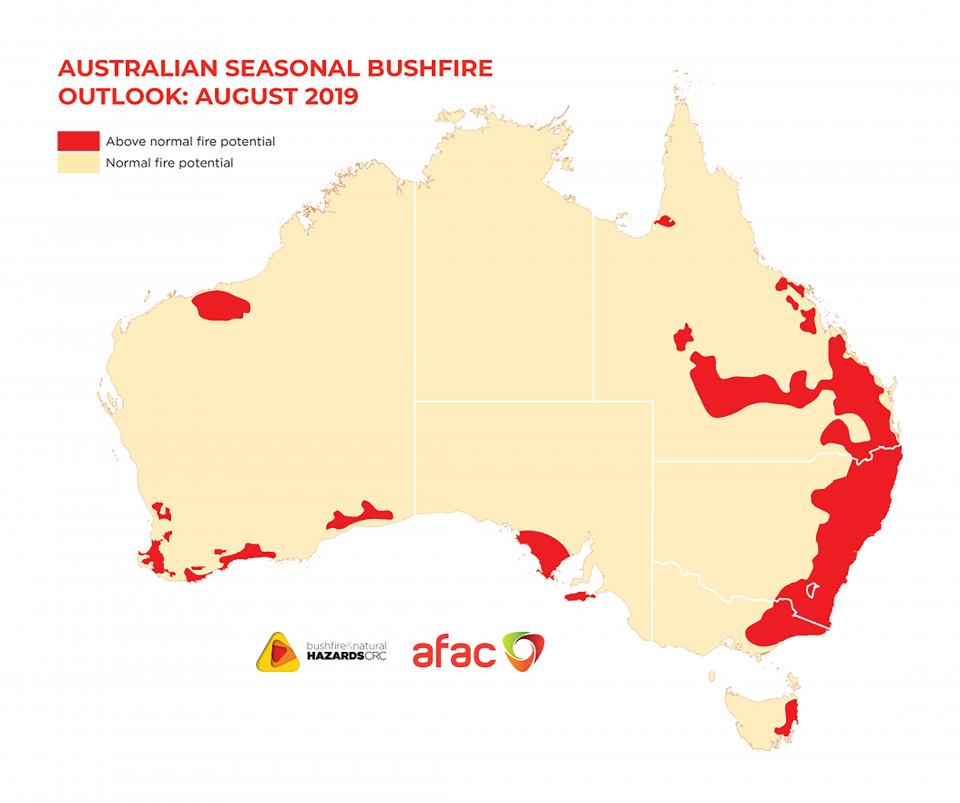 The fire statistics so far

Other states data is at the link. Curiously, in WA as much as 1.5million ha has burnt, but only one house was lost.

At least half a billion animals have died. (At least). More will follow with food and water shortages, and a lack of shelter.

NSW RFS: Fires near you