Pandemonium in Australia: Seven people have died (this season) and in the last day or so another 176 houses were destroyed in the NSW fires. At least two more are missing. It is a surreal debacle on the East Coast. People are driving into lakes to save themselves and their cars. (See the whole video). Take your breath away. What a spectacle. They chainsawed trees to cut a path to the lake so they could drive in. 89 houses were lost in the town near here.

89 houses were lost in Lake Conjola township but a few saved their cars in the lake. (Image pieced together from the video pan)

Meanwhile, apparently the ABC is cleaning Facebook posts up where two locals of Nowa Nowa (East Gippsland) protested a few months ago and stopped a prescribed burn. One said she was “more worried about climate change”.

Could be a clue here about how the nation got its priorities so screwed?

Back in September ABC Gippsland put a story on Facebook about how locals were protesting the spring prescribed burns which were “killing baby birds alive”. The East Gippsland locals managed to stop the hazard reduction burns. We note also that the Forest Fire Management Victoria local manager said that the burns were planned “after extensive community consultation”. Which tells us just how impossibly hard it is to get even a small (tiny) cool burn done. We’re only talking about 370 ha.

Sharp eyed Michael Ayling noticed that the ABC deleted this Facebook post below. Most of it is still captured on Google Cache, though for some reason, if you wait on the google cache page even that will disappear soon too. Luckily skeptics with no budget are here to help the ABC and Google Cache keep historic records that may help explain the mystery of how a first world nation created such a catastrophe.

It’s probably not the protesters’s fault that she thought climate change posed more threat than bushfires. She probably watches Their ABC.

*UPDATE: This is not about the protestors (or about a tiny 370 ha, which wouldn’t have changed anything yesterday). Accountability lies with decision-makers. Everyone has the right to protest and after twenty years of one sided and well funded propaganda it’s no wonder people are confused.  The ABC cheered for “climate change”, and asked no hard questions. They mentioned fuel loads but didn’t put those experts on high rotation. They did repeated interviews with people who know nothing about climate change like Greg Mullins. He was free to repeat the mantra. The ABC decide what message goes out.

h/t to Panda who sent in a Cauldronpool link. In October the ABC reported that the planned 300 ha burn was reduced to just 9 ha. 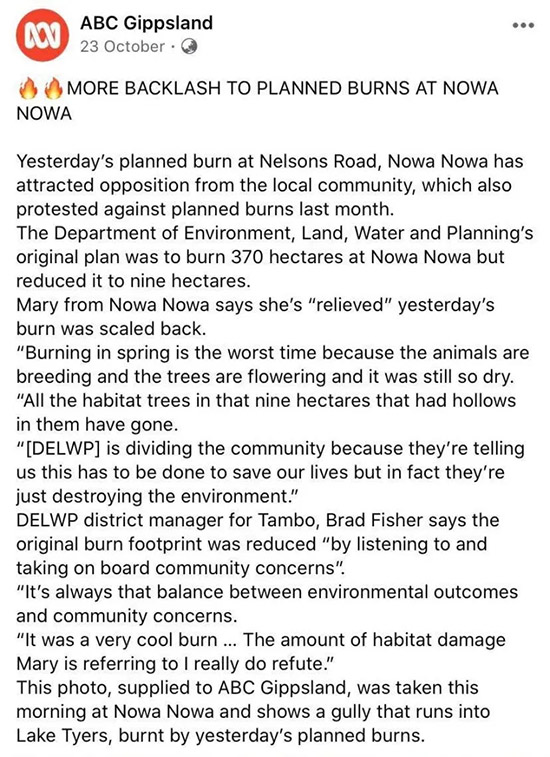 ABC reporting on relief at stopping the prescribed burns

I don’t know (can anyone confirm) whether fuel reduction at Nowa Nowa, Mossiface and Lake Tyers has been completed by mother nature?

Who misled the nation, and who knows it? Feeling guilty ABC?

Prayers for those still in the path.